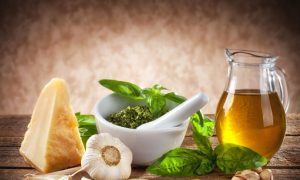 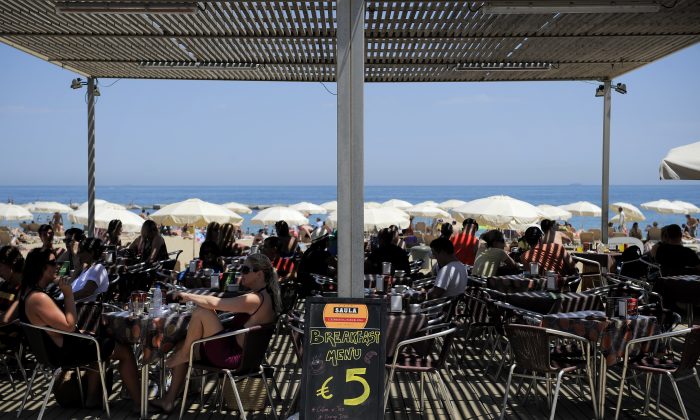 A sign shows the price in Euros for a breakfast menu in a restaurant on the La Barceloneta beach on June 22, 2011 in Barcelona, Spain. (David Ramos/Getty Images)
Environment

The Mediterranean diet is prized for its nutritional value and health benefits. Since a 1970 study conducted by American scientist Ancel Keys found reduced rates of heart disease and longer lifespans among people living in the Mediterranean, researchers have tried to uncover the reasons behind the diet’s healthful qualities.

The diet is heavy on fruits and vegetables, whole grains, and olive oil, with moderate amounts of seafood and dairy products, and red meat and sweets reserved for special occasions.

Some studies have shown eating the Mediterranean diet is also associated with lower rates of type 2 diabetes and certain types of cancer.

Want to Know the Secret to the French Staying Healthy?

In 1993, the nonprofit Oldways, the Harvard School of Public Health, and the World Health Organization introduced the Mediterranean Diet Food Pyramid, allowing consumers to easily identify the kinds of food they need to eat in accordance with the diet.

Since then, the Mediterranean diet has been synonymous with healthy eating. It’s rated as the third best diet by the U.S. News and World Report (the DASH diet and the TLC diet are No. 1 and 2, respectively). The eating habits of the Mediterranean have even spawned foodie trends in the United States like Greek yogurt, hummus, and quinoa.

The diet is such a distinctive part of the region’s culture that in 2010, it was recognized by UNESCO (United Nations Educational, Scientific and Cultural Organization) as an “intangible cultural heritage of humanity.”

A Diet on the Decline

But the United Nations Food and Agriculture Organization (FAO) recently released a report revealing that more and more people in Mediterranean countries were actually turning away from the traditional diet.

The FAO warned that as a result, Mediterranean countries are seeing higher rates of obesity.

Meanwhile, many countries along the east and south of the Mediterranean coast—Albania, Egypt, and Libya, for example—have high poverty rates, limited natural resources, and insufficient food supply, leading to malnutrition among children, the FAO said.

The problem is the worst in Syria: almost 28 percent of children under 5 have stunted growth.

But the FAO was especially concerned about the impact of such changing dietary patterns on the environment—as food production moves away from traditional methods of sustainable farming to industrial methods.

“Ancient vineyards, orchards, and olive groves have been uprooted to make way for large-scale fruit or olive plantations and mixed rotational farming has been replaced by intensive monocultures,” the FAO stated in the report.

“This has not only caused the loss of wildlife-rich habitats but has also had a major socio-economic impact on large parts of the region as many small-scale farmers have been forced to abandon their land to go and search for jobs elsewhere,” the organization continued.

The FAO urged governments to preserve the Mediterranean diet and the region’s farming practices by raising more public awareness of their benefits to public health and the environment.