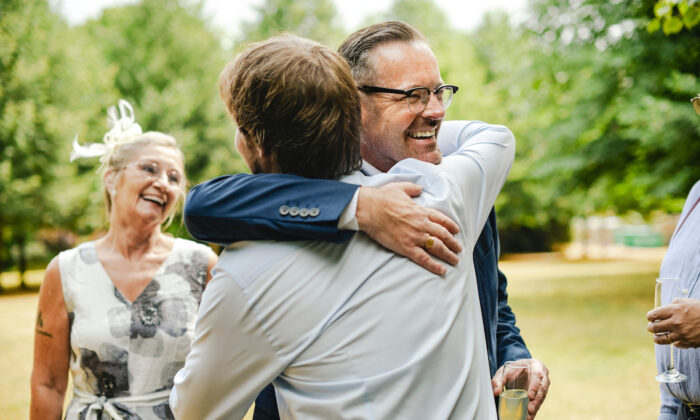 The father of the groom is a doubly subordinated character in the drama; not just a bit player, but a walk-on.
Family

What’s a Father of the Groom to Do at the Wedding?

The role of the mother of the groom in a wedding—in the words of the blunt old saying—is simple: show up, shut up, and wear beige.

It’s tough, but customs survive because they reflect reality, and it is a universally acknowledged truth that weddings are—and should be—about the bride, not the groom.

Since that’s the case, the father of the groom is a doubly subordinated character in the drama; not just a bit player, but a walk-on. What exactly is he supposed to do?

Well, make the first toast at the rehearsal dinner, and keep it positive. You may have some great one-liners in your comic repertoire, such as the one that goes, “You only get married for the first time once,” and “Never go to bed angry—stay up and finish the job.”

Discretion, as Shakespeare’s Falstaff said, is the better part of valor. Save them for poker night.

As my elder son’s wedding approached, I found myself at a loss for advice on what I’m supposed to do. There is no shortage of online and in-print articles that lay out the responsibilities of the groom’s mother, but his father? Wedding planners must assume an excess of rugged individualism in the male half of the groom’s parents.

I thought back 33 years to the months leading up to my own wedding for guidance. My share of the marital chores was limited because my wife loves weddings so much she used to dress up in a bridal gown on Halloween. I, on the other hand, would take my sister’s eyebrow pencil, scribble a mustache and goatee on my face, and trick-or-treat as a beatnik. Opposites, you may have heard, attract.

So my only duty of consequence back then was to hire the band for the reception, a task I was happy to take on. Since the invitees would include a number of people who pre-dated rock ‘n roll (including my parents) I thought it advisable—and considerate—to have music that could be danced to, in the words of the Irving Berlin song, cheek to cheek.

The premier provider of music of that type in Boston at the time was one Sebastian “Sabby” Lewis, a black bandleader in his 70s, approximately the age of my father. Lewis was a rarity in the world of swing; he remained a regional favorite in New England when he could have moved on to New York, the place where jazzmen go to prove themselves, both in his day and now. Still, he produced music hot enough to impress Count Basie who, after watching Lewis and his men perform one night, sent Lewis a telegram from the road saying simply, “Rock em, pops!”

At the end of his career, Lewis and his band had a gig at a downtown hotel, a commonplace when jazz was America’s preferred popular music. A phone call was made and things were set, except for the first dance, traditionally the bride and groom’s favorite song. In the case of my wife and I—whose tastes vary widely–that would have been “Whatever We Imagine” by James Ingram, the one song we both liked, although it hasn’t made its way into the wedding canon alongside “Here Comes the Bride” and “We’ve Only Just Begun.”

When it came time to put the question to Sabby—I couldn’t. Gods don’t answer letters, John Updike said of Ted Williams’s refusal to tip his cap to fans after he hit a home run in his last at-bat in Boston. One similarly doesn’t require old musicians to learn new tricks once they’ve entered their seventh decade, so I asked instead for “Have You Met Miss Jones?”—a 1937 Rodgers and Hart number still played today. It evoked memories of how I’d met my wife; in a polite and professional setting, not at wet T-shirt night in one of Boston’s many noisy watering holes for singles.

When we went out in the middle of the ballroom for the first dance and she didn’t hear our favorite song, an explanation was in order. “Uh, it’s my second favorite song” was all I could say.

That little musical infidelity has long since been forgiven, so when it became apparent that I had no chores to perform as our son’s wedding approached, I was charged by my wife with putting together a playlist on my phone for the rehearsal dinner. This time, there would be no excuse—you can have any music you want when you bring your own.

And so it was with a sense of tradition that I informed my son I was putting together the music for the dinner—did he or his fiancée have any requests?

Con Chapman is the author of “Rabbit’s Blues: The Life and Music of Johnny Hodges” (Oxford University Press).