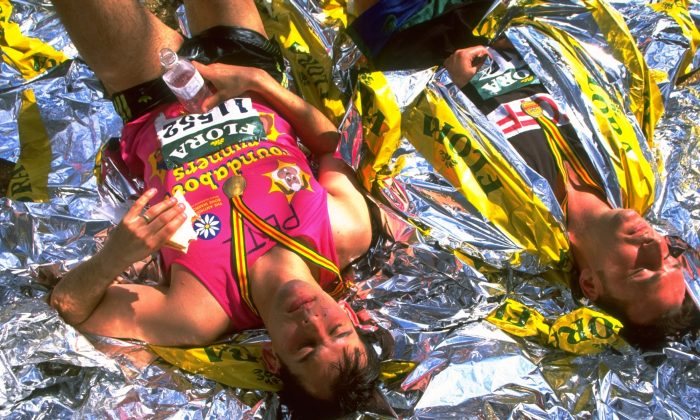 What to Eat and Drink After Running a Marathon

On crossing the finish line, the temptation to go straight to bed or head to the pub for a few beers and a slap up meal will be strong. But while it is important to enjoy your achievement and indulge in a treat or two, a few nutrition tips will go a long way in helping you to feel less sore and move more freely in the days after the marathon.

Runners should try to consume some carbohydrate, ideally 50-100g within an hour of finishing the marathon in either food or drink form. This could include carbohydrate sports drinks, cereal bars, bananas or bread-based products.

How to Run a Marathon

The 10 Best Places in the World to Run a Marathon

The first 30-60 minutes after exercise is often referred to as the “window of opportunity” as this is when the muscle is primed to take up the carbohydrate you consume and store it.

Choose sources of carbohydrate that are quickly digested and that you know you can tolerate. Continue to consume a good source of carbohydrate such as pasta, rice or bread for three to four hours after exercise to maximise glycogen resynthesis – the replenishment of carbohydrate stores in the muscle.

Fluid restoration is also extremely important after a marathon. Most runners will have no idea of their fluid losses over the course of the run and so the best indication of hydration status is urine colour – pale straw colour is ideal.

If you are a salty sweater – you’ll know because you’ll be able to taste it on your skin – it is essential to replace the salts that you have lost in your sweat. Adding some salt to your post exercise drink can not only help to balance those sodium levels, but it can also help with fluid retention.

Milk and dairy products have also been shown to have a lot of functional benefits during exercise recovery, so having a milkshake straight after you stop running is a great way of finishing the race. This is obviously only the case if you can stomach dairy products after prolonged exercise and have no associated intolerances.

Milk is a source of carbohydrate, proteins, several vitamins and minerals, including sodium and also is a fluid so can aid rehydration. Research has shown that milk is a more effective rehydration solution than a carbohydrate only solution as the proteins in milk help the body to retain the fluid.

The carbohydrates and proteins in milk can facilitate the recovery of glycogen and milk proteins (in particular whey proteins) are readily used by the muscle to repair and regenerate after strenuous exercise.

We have also shown that consuming 500ml of milk (which is about two large glasses) within 30 minutes following a very hard bout of exercise can help alleviate those feelings of soreness and can actually help you to physically function better in the 24-72 hours after the exercise bout.

Bring on the Beetroot

But if milk and dairy are not for you then there are several other foods than can help alleviate soreness during the recovery process.

We recently found that beetroot juice, which is high in both nitrates and phytonutrients – natural chemicals found in plant foods – help to reduce soreness after exercise and speed up the recovery of muscle function over 72 hours.

How this happens is still unknown, but at this point we do know that similar studies have shown that other phytonutrient rich foods such as tart cherries, blueberries and pomegranate can all have a similar effect.

Plus, these phytonutrient rich fruit and vegetables may also help protect the body from coughs and colds and other infections in the days after a marathon, when your immune system is lower after being suppressed.

The take home from this is that rehydrating and ensuring you consume a good source of carbohydrate and protein in the first 30-60 minutes after the marathon will go some way to help your body recover from the physiological strain of those 26.2 miles.

But, if all else fails and you found you made a beeline for the pub, in the days after the marathon, you cannot go wrong with a few hot baths and some good nights rest.