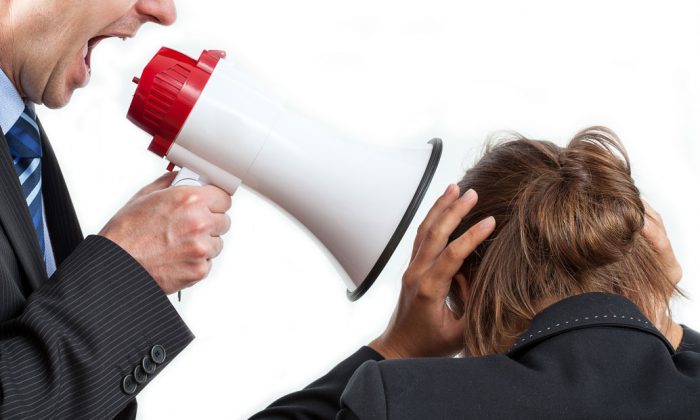 People who are bullied at work often feel ostracized because other employees, who witness or are aware of the bullying, are hesitant to get involved, says Stacy Tye-Williams. Co-workers may want to help, but don't, because they either feel they don't have the power to change the situation or worry they'll become a target, too. (Shutterstock*)
Health News

What to Do When You Work With a Bully

Approximately 54 million workers, or 35 percent of employees in the United States, report being the target of a bully at some point in their career, according to a new report.

No one expects to go to work and feel as though they are back on the school playground, but bullying is all too common for many workers. And much of the bullying goes unreported.

“Many of the participants felt no one would believe them, or they were afraid of being labeled as a big cry baby or a whiner, so they didn’t tell a manager or someone else in the organization,” says Stacy Tye-Williams, assistant professor of communications studies and English at Iowa State University.

“When you experience serious trauma in the workplace, it’s difficult to explain to people what is happening to you.”

For the study, published in the journal Management Communications Quarterly, Tye-Williams and Kathleen Krone, a professor at the University of Nebraska-Lincoln, collected narratives from 48 bullying victims.

More than half reported being bullied by their manager or boss, while others were targeted by a co-worker. Participants worked in various fields including professional and technical, education, health care, banking and finance, and the military.

Several victims had difficulty finding the right words or putting events in logical order to explain how the bullying started and escalated. The stories don’t always have a distinct beginning, middle, or end. Several months can pass before the victim realizes there is a problem, because bullying often starts with subtle behaviors that make it hard to identify initially.

Order and timing are not the only challenges to forming a story. Victims say sharing their experience is like trying to describe the indescribable. How victims tell their stories makes all the difference in whether people believe what they say is true, Tye-Williams says.

How Coworkers Can Help

“When the story is all over the place and feels disjointed or disconnected, people don’t understand or they can’t make sense of what happened. Then what often happens is the victim is not taken seriously or not believed, which is really sad because these victims tend to be the ones suffering most.”

Victims often feel ostracized because other employees, who witness or are aware of the bullying, are hesitant to get involved. Co-workers may want to help, but don’t feel they have the power to change the situation or fear they too will become a target, Tye-Williams says. Previous studies show that victims have lower levels of depression and higher levels of job satisfaction when they have a co-worker to talk to and provide support.

“If victims are not believed and don’t have someone to talk to about their story, then they have a hard time formulating a narrative,” Tye-Williams says. “Even if you’re not comfortable as a co-worker reporting the behavior, letting the victim tell you their story, go with you to have a drink and vent, or just feel believed can help.

“For a lot of victims, that process of being believed and having someone listen to their story is crucial in helping them better communicate about their experience.”

When the Manager Is the Bully

If a victim does report the bullying, it is important for managers to reserve judgment. Even when the story is hard to follow, managers need to listen and ask questions, Tye-Williams says. This will help the victim organize his or her thoughts and make it easier for the manager to understand what is going on.

The fact that a manager or boss is most often identified as the bully could be a roadblock for change in smaller businesses. Not only do victims need to be heard, there needs to be action to stop the bullying and initiate a change in the organization’s culture. Targets are more likely to come forward and report the behavior if they work in a supportive environment.

Schools focus a lot of attention on stopping and preventing bullying, but it is not as openly discussed in the workplace. Some research shows children who are bullies in school continue that behavior as adults. Greater awareness will help, but even small, simple changes can make a difference.

“Sometimes people are already aware of bullying, but others want to know how it’s different from harassment or discrimination, so awareness of the issue is important,” Tye-Williams saysd. “It’s also important that we learn how to treat each other better and reach out when people are being harmed. We can all make strides in that direction.”

*Image of “bullying in the work” via Shutterstock