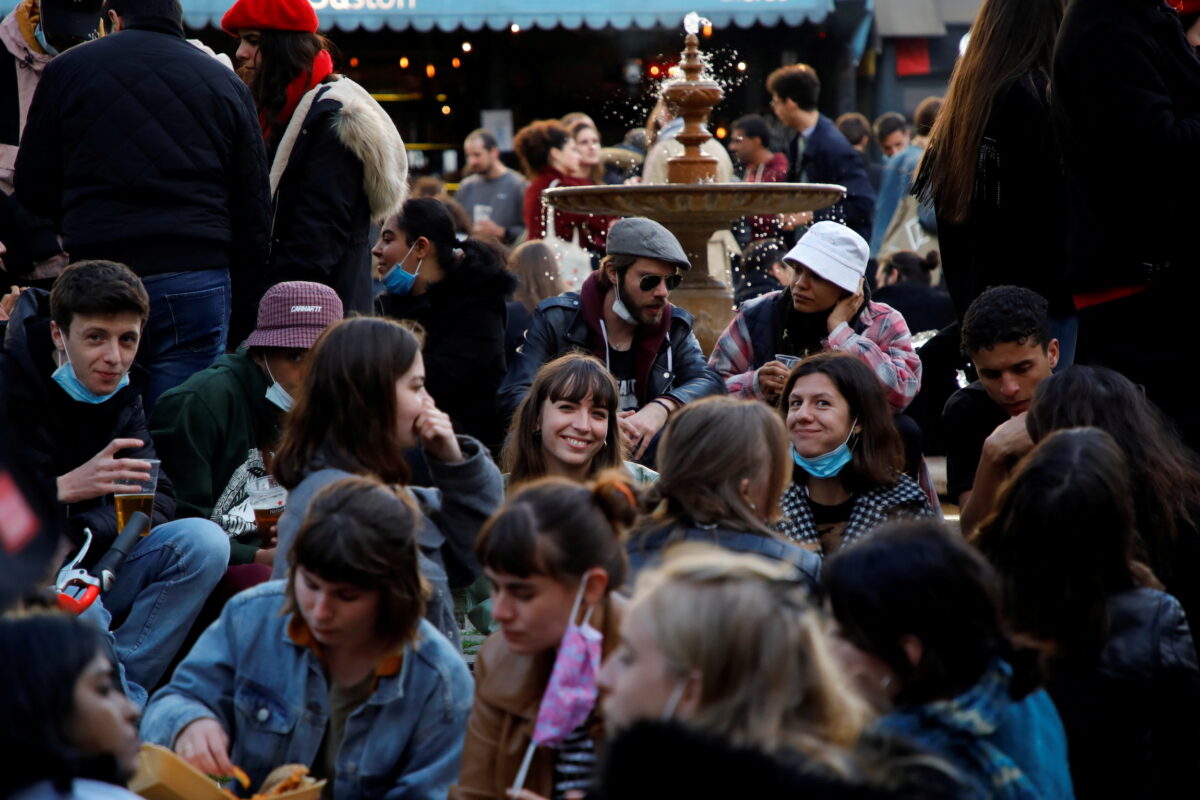 People enjoy an evening drink at Place de la Contrescarpe in Paris as cafes, bars, and restaurants reopen after closing down for months amid the COVID-19 outbreak in France, on May 19, 2021. (Sarah Meyssonnier/Reuters)
Health Viewpoints

What the Science Says About Forgiveness

We’ve seen a lot of T-shirts and memes circulating on social media with some version of the words: “Forgive me for anything I said or did during COVID.”

The COVID crisis—along with disagreements about the severity of the disease, the safety and necessity of vaccines, and the advisability of lockdowns—has divided families, estranged friendships, and led to many misunderstandings and hurt feelings.

There is no sign that the arguments will stop anytime soon. In some places in America, children are again being forced to wear masks.

Other viral “threats,” like monkeypox, snail fever, and tomato flu are keeping the fear of contagion front and center in people’s minds.

A Time for Forgiveness

In the midst of one of the most difficult times in recent history, we need to learn to forgive. We have to forgive ourselves and forgive each other.

“Now, more than ever, is a time for understanding the trauma that’s perpetuating abuse,” says Diane Brussell, a clinical counselor who packed up her life, sold her home, and fled Canada with her husband and two teenaged sons in just two weeks’ time back in October of 2021 due to draconian vaccine mandates.

“In one sense forgiveness is a simplification of the complexity,” Brussell continued. “Abuse doesn’t come from nowhere. We’re not designed to hurt other people—I believe that that’s a reactive traumatic state from being hurt.”

But when Canada announced they were closing the border to any unvaccinated Canadians and wouldn’t be letting people out, Brussell and her family knew they could not stay. “We knew we had to leave fast,” Brussell said. “We’re still completely uprooted and dealing with so much stress. We’re lucky we were able to get out … but we really feel like refugees now.”

Even as you strive for understanding, it’s important to set boundaries, Brussell said, to stop others from hurting you. That’s the reason her family left Canada for South Carolina: to stop being abused by the Canadian government.

The Science of Forgiveness

Loren Toussaint is a Professor of Psychologist at Luther College in Decorah, Iowa who has made a career out of studying forgiveness (among other things, he is Vice Chair of the Forgiveness Scientific Advisory Council and President of Forgiveness Foundation International.)

As Toussaint explores in detail in his 2015 book, “Forgiveness and Health: Scientific Evidence and Theories Relating Forgiveness to Better Health,” forgiveness has been linked to better cardiac functioning and cognitive health, and even less lower back pain and better immune functioning. 1,2,3,4

Forgiving oneself may be as important to forgiving others. In 2019, a team of Scottish researchers did a systematic review of the peer-reviewed literature about self-compassion. In analyzing the 18 studies they found, the researchers discovered that all of them: “reported significant associations between higher levels of self-forgiveness or self-compassion and lower levels of self-harm or suicidal ideation.” 5

In other words, if you can practice self-compassion and forgive yourself for your own misdeeds you are less likely to feel suicidal or attempt suicide.

However, studying forgiveness scientifically is complicated: What is forgiveness exactly? How do you measure it? How do you know if the act of forgiving causes measurable physical outcomes?

In addition, several studies we reviewed seemed to suggest that just saying “I forgive you,” without emotionally feeling forgiveness did not necessarily confer health benefits.

Still, everyone who has ever held a grudge knows how harmful it can be to feel angry, resentful, and unforgiving, and how much lighter and better you feel when you stop ruminating on the wrongs that you perceive have been done to you.

The Christian Way of Forgiveness

In Western culture, forgiveness looms large in Christianity. Regarding oneself, God will always forgive those who admit and earnestly repent their sins. The Catholic Church is the largest Christian sect with well over a billion adherents. Catholicism requires the faithful to regularly confess their sins to a priest and ask God’s forgiveness.

Regarding others, it is made clear in many ways that a Christian must turn the other cheek, judge not, and forgive freely, as Catholics recite in a line of a common prayer in which they ask God to “forgive us our sins, as we forgive those who sin against us.” The reciprocity of forgiveness is front and center in this tradition. The Christian’s role is to forgive, to love one’s enemy, and to be humble and charitable.

These are deeply moving tenants to live by, no matter what your faith, but being able to forgive always seems to be a work in progress for human beings.

Most Buddhist traditions believe in reincarnation. What is happening in our lives now is a direct result of what happened in our previous lives, which will in turn impact our future lives.

In this world view, someone who wrongs you now may have been wronged by you in a previous life.

If you decide not to forgive—or choose to act vengefully—then bad karma between you and others will accumulate, leading to more trouble for the rest of your life, and possibly in your future lives.

Setting Down Your Burden

Perhaps you’ve heard this Zen parable before: Two monks are traveling a long distance. There has just been a heavy rain and the monks come to the edge of a rushing river. As they prepare to cross, the monks see a rich young woman carrying bundles of goods who is also trying to cross the river. Rather superciliously, she asks for their help.

Without another word, the older, wiser monk puts the woman on his back and helps her across, bringing her to the dry land on the other side of the river. Instead of thanking him, however, the rich young woman grumbles about how her silk dress has gotten wet and her shoes muddied.

The two monks continue on their journey in silence. Finally, after several more hours of walking, the younger monk blurts out, “How could that rich lady have been so rude to you?!”

“My son,” the senior monk says. “I set that burden down hours ago. Why are you still carrying it?”

The old monk didn’t let the young woman’s rudeness affect him. He did her an act of kindness for the sake of being kind, good, and just. She was unquestionably ungrateful and rude. But that was her burden to carry, not his.

The idea behind this parable is that carrying a burden—holding a grudge—is a choice. The old monk had the wisdom not to choose to be burdened. The young monk, still learning to negotiate life’s setbacks and people’s arrogance, allowed himself to be burdened.

As hard as it can be for some of us, forgiveness is a skill that can be honed. Toussaint says the key to forgiving someone is willingness and empathy. In order to let go a wrong that has been done to you, it’s important to see things from the wrongdoer’s point of view. Luckily, we will all get lots of practice. As we collectively move past the globally mismanaged response to coronavirus, we all have a lot of forgiving to do.