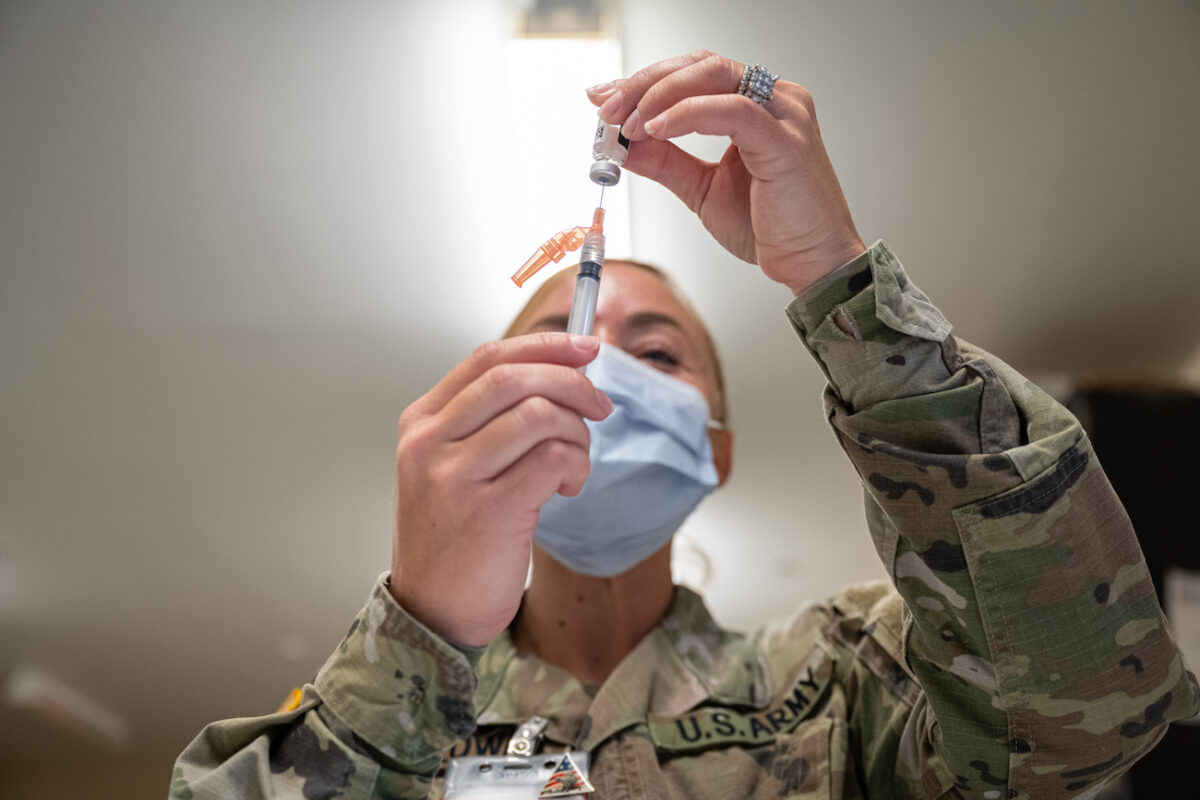 On May 5, 2022, the Food and Drug Administration (FDA) announced the restriction of usage of the Johnson & Johnson (Janssen) vaccine, stating that only people who are not suitable for the Pfizer or Modena mRNA vaccines, or who cannot receive the mRNA vaccines, can receive the Janssen vaccine.

What new findings has the FDA made about the side effects of the Janssen vaccine?

Usually, “restrictions” are used for “groups unsuitable for vaccination.” For instance, in the United Kingdom, the AstraZeneca (AZ) vaccine is restricted for people under the age of 40, because people under 40 years old are associated with a higher risk of a severe adverse reaction – thrombosis with thrombocytopenia syndrome (TTS) upon receiving AZ COVID vaccine. This restriction is imposed to prevent people with high risk from receiving the vaccine.

This is akin to stating that if people cannot get a better vaccine, they can get a worse vaccine. In a slightly exaggerated way, the FDA is saying that if you can’t access to a drug with fewer side effects, then you are entitled to a drug with dangerous side effects. Don’t drugs with dangerous side effects need to be suspended in their permits, and pending for further investigation? An ongoing outbreak/pandemic gives the vaccine industry a reason to speed up the development and production, but it does not mean that they should be provided with a free or easy pass for safety.

The Janssen vaccine was granted the Emergency Use Authorization (EUA) by the FDA on February 27, 2021.

In March 2021, a rare but serious the side effect of the AstraZeneca vaccine, thrombosis with thrombocytopenia syndrome (TTS), was discovered in Europe.

Soon afterwards, on April 13, 2021, six cases of the same thrombotic syndrome were found in Janssen vaccine recipients. The FDA immediately announced a pause in administration of the vaccine and started an investigation.

Ten days later, on April 23, the Janssen vaccine’s administration pause was lifted, with the FDA citing the small number of reported cases and the uncertainty of whether or not some similar cases were caused by the vaccine. On the recommendation of the CDC’s Advisory Committee on Immunization Practices (ACIP), the FDA continued to implement the rollout of the Janssen vaccine.

However, in December 2021, the CDC’s ACIP issued a recommendation with carefully-chosen language, stating that the Pfizer and Modena vaccines were preferred over the Janssen vaccine. Then the question is why ACIP needed to give this recommendation?

However, neither the ACIP nor the FDA released updated data about side effects to the public at that time. They didn’t recommend a pause on the Janssen vaccine’s administration, either. Instead, they only “recommended” the use of Pfizer and Modena vaccines without clearly explaining the reasons to the public.

Then, the next question is: why did it take five months for the FDA to take action, when the ACIP already gave its preferential recommendation in December 2021?

How many people received the Janssen vaccine during those past five months? If the FDA had acted in a timely manner, could it have prevented some people from getting serious side effects from the vaccine?

Let us take a look at the new data from FDA recent statement in May 2022: as of March 18, 2022, a total of 60 cases of TTS had been confirmed in Janssen vaccine recipients.

The International Society on Thrombosis and Haemostasis (ISTH) actually referred TTS as vaccine-induced immune thrombotic thrombocytopenia (VITT), a term commonly used in Europe. However, the FDA and CDC refer to it as TTS.

The difference between TTS and VITT is that VITT clearly defines that this thrombotic thrombocytopenia is induced by vaccination, while the term TTS encompasses symptoms from causes other than the vaccines (such as antiphospholipid symptoms), thus obscuring the cause of the symptoms.

The latest FDA release mentioned that 60 cases of thrombosis have been confirmed in the Vaccine Adverse Event Reporting System (VAERS), at a rate of 3.23 per million. This ratio may not seem high, and the cases still are rare events. However, we need to keep in mind that the VAERS database only collects data passively, and the actual figure in the real world would certainly exceed this number.

In addition, the document mentioned nine fatalities out of the 60 thrombosis cases, and the FDA confirmed the fatalities to be vaccine-induced, with a mortality rate of 15 percent.

According to the information collected worldwide on the AZ vaccine, the mortality rate for VITT is approximately 22 percent. Although treatment options for VITT/TTS are available, many patients’ conditions experienced rapid deterioration.

By the end of December 2021, VAERS reported more than 10,000 vaccine-related deaths. In response to these deaths, the FDA and CDC have only explained that these deaths need to be medically examined to confirm their causality with vaccine administration.

So, now with nine fatalities confirmed to be linked to Janssen vaccine administration, what would be the number of death cases in the VAERS systems that have been medically confirmed to be linked to the mRNA vaccines? Did all the people lie about or misreport the death cases, except the 9 cases related to Janssen vaccine? Did FDA obtain updated reports on this vaccine-linked death issue after more than 1.5 years of intensive campaign of vaccination? If so, shouldn’t the data be released to the public in a transparent manner?

It is of paramount seriousness and urgency that a drug or vaccine causes serious and fatal adverse events.
In the 1980s, one vaccine was in development against the dengue viruses. During the clinical trial, one volunteer’s death was identified.

Although there was no way to completely confirm whether or not the deaths were caused by the vaccine, the vaccine’s development was eventually halted, because the risk of death was taken seriously as one of grave concerns.

However, the connivance of pharmaceutical companies and government regulators is now vastly different from before.

In recent years, French vaccine company Sanofi Pasteur developed a dengue vaccine called Dengvaxia. In Southeast Asia, children have been given the vaccine on a massive scale, and there have been many deaths in the Philippines alone. According to NPR, in the Philippines, “In total, the deaths of about 600 children who received Dengvaxia are under investigation by the Public Attorney’s Office.”

By the time Sanofi acknowledged in Nov 2017 that its Dengvaxia vaccine brought high risks for kids who were not previously infected with Dengue, about 800,000 Philippine children had been vaccinated already. Sanofi estimated that more than 100,000 of them had never been infected with dengue and should not have received the shot, according to WHO’s revised recommendation. So, has anyone in Sanofi Pasteur been held accountable for this late warning? Has any Philippine government officials been held accountable for this massive rollout and late decision to halt the related vaccination campaign?

When a vaccine company’s products pose a serious risk, whether government regulators can impose a strict control over them and/or stop their use in a timely manner is a fundamental ethical and moral issue.

When the Johnson & Johnson vaccine’s severe side effects emerged, the FDA didn’t ban the vaccine directly, but it instead allowed people who could not receive mRNA vaccines or don’t have access to mRNA vaccines to get the Janssen vaccine. Did the FDA worry that it will further raise vaccine resistance if they rescind the authorization to Janssen vaccine? Or did they just want to protect Janssen vaccine’s global market and profits?

In addition, Johnson & Johnson itself hasn’t released any information to respond to the queries, neither explaining nor defending itself, as if it is simply leaving it to the media to downplay the issue.

WHO Recommended Considering a Second Dose of the Janssen Vaccine

Besides the one-dose regimen, Johnson & Johnson also performed clinical trials of administering two vaccine doses. After two doses of the vaccine were administered at two-month intervals or six-month intervals, changes in the number of antibodies in the body were observed respectively:

On December 9, 2021, the WHO recommended countries to consider using two courses of the Janssen vaccine.

The WHO highly values these clinical trial results, but it seems to downplay the issues of adverse events and serious side effects. And it doesn’t address whether or not two doses of the vaccine will increase people’s chances of getting TTS or VITT.

Currently, the WHO’s principal goal is to vaccinate more people across the globe, and to ensure that vaccines are distributed equitably around the world—especially to poor countries. So it hasn’t kept up with the European age restriction on the AZ vaccine.

Of course, there is some merit to this approach. However, authoritative health organizations should also consider the issue of side effects. And when Johnson & Johnson provides clinical trial data, they need to be asked questions about the side effects.

2 Other Serious Side Effects of the Janssen Vaccine

Data collected by the WHO from around the world indicate that the Janssen vaccine has two other serious side effects, in addition to the TTS.

One of them is the Guillain-Barre Syndrome (GBS), which refers to the immune system attacking its own nervous system, with an incidence of one in 7 to 8 million.

The other is the capillary leak syndrome (CLS), in which plasma leaks out of blood vessels and infiltrates into tissues, causing a generalized edema, with an incidence of 0.21 per 1 million and a relatively high mortality rate.

Although the number of cases found is still relatively small, these two serious side effects are still worthy of attention.

Nowadays, people are used to pharmaceutical companies writing their side effects in fine print, not easily noticed by the public. Drug companies need to consider their own interests, but then the regulators should warn the public about such side effects, rather than just recommending certain drugs while downplaying their serious side effects.

Health 1+1
Follow
Health 1+1 is the most authoritative Chinese medical and health information platform overseas. Every Tuesday to Saturday from 9:00 am to 10:00 am EST on TV and online, the program covers the latest on the coronavirus, prevention, treatment, scientific research and policy, as well as cancer, chronic illness, emotional and spiritual health, immunity, health insurance, and other aspects to provide people with reliable and considerate care and help. Online: EpochTimes.com/Health TV: NTDTV.com/live

Xiaoxu Sean Lin
Follow
Dr. Xiaoxu Sean Lin is an assistant professor in Biomedical Science Department at Feitian College - Middletown NY. Dr. Lin is also a frequent analyst and commentator for Epoch Media Group, VOA, and RFA. Dr. Lin is a veteran who served as a U.S. Army microbiologist. Dr. Lin is also a member of Committee of Present Danger: China.
SHARE
Friends Read FreeCopyFacebookTweet
You May Also Like