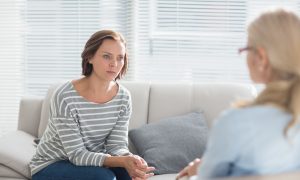 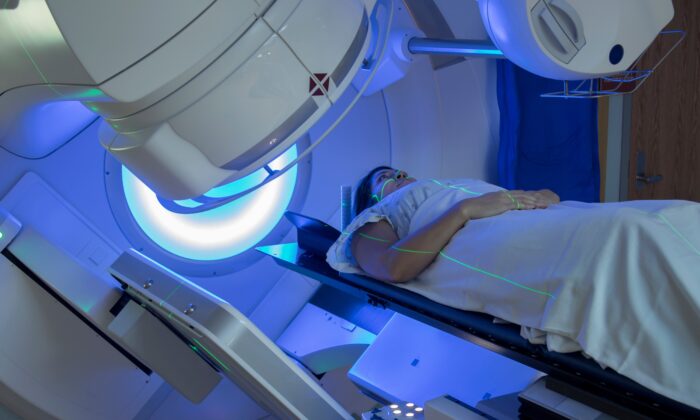 To say that I was dreading getting radiation to treat my cancer is a severe understatement. I had no idea what to expect. My radiation oncologist told me that I’d need 5 1/2 weeks of radiation and chemo pills every weekday. This regimen would attempt to kill and/or shrink my stage 3 rectal tumor, and eradicate any cancer in the surrounding rectal lymph nodes. Was it going to hurt? How sick was I going to get from it? I didn’t know, but it all sounded awful.

The first step was a 30-minute radiation simulation appointment on Jan. 18, 2018. This visit included getting my photo taken (to link my face with my medical records to ensure I was the correct patient), sitting on a blue plastic tarp on a table that turned into a hard mold of my body from the waist down (to keep me in the same position each treatment), and getting three tiny, black, pin-sized tattoos on my hips and private area. These were then covered in clear stickers to help the technicians align me properly for each treatment.

As I was getting ready to leave, the two technicians told me that if I wore sweatpants with no metal on them, or elastic waist leggings each treatment, I could simply pull down my pants while on the table and not have to change into a hospital gown every time. Point taken. I went out and got a few pairs of leggings for the weeks ahead (as if I needed an excuse to go shopping).

Before my first radiation treatment, I had to solve the logistics of these Monday-through-Friday appointments. Since I lived in New Jersey, about an hour and 20 minutes away from the Cancer Treatment Centers of America (CTCA) in Philadelphia, it made sense to be closer to the facility. My brother graciously volunteered to be my caregiver and go with me to my treatments, so we rented places through Airbnb from Sunday through Thursday. This was cheaper than staying at a hotel.

Thankfully, since I had already been approved for short-term disability, and my brother worked from home, this arrangement worked.

My radiation treatments began Jan. 24, 2018. That morning I accidentally took my first chemo pills 30 minutes after eating breakfast but should have waited to take them on the second day, as I later learned from my oncology nurse. They wanted to run blood tests first before I started them.

As I walked into the radiation waiting room that first day, I was nervous and unsure of what was going to happen. After sitting for 10 minutes, my name was called and a radiation technician brought me to the treatment room.

I verified my picture on their computer screen and I initialed a logbook that kept track of my treatments. I sighed at the 28 appointments listed there and scribbled my initials.

Two technicians walked me through a two-foot-thick door into the actual treatment room where the machine was. It looked like we were going into a safe at Fort Knox. I’m guessing it was to contain the radiation. I stepped up and fit myself into the blue-tarp-mold table that was under the machine and laid down. They covered me with a warm sheet and I pulled my leggings down to my knees.

A technician pulled my underwear a bit lower so they could see the stickers that had been put on me. I wasn’t prepared for that, but it was OK and I was still covered for the most part. Then they began to adjust me so that I was perfectly aligned, and covered me back up with the blanket when they finished. They played my choice of music for the 10-minute treatment. I asked for spa music, to keep me calm, the first three weeks, and then Motown for motivation for the final weeks.

The technicians then left the room and the machine began to swirl around me loudly. About halfway through, I felt my table move and tilt a bit. They were adjusting the angles from their control room. Then the machine swirled around me again.

I always kept my eyes closed during the treatment and tried to recite positive sayings and talk to the radiation machine. I nicknamed it Rodney. I would tell it things such as, “Kill the tumor but don’t do any other harm to me.” Before I would know it, the treatment would be over and a technician would come to help me out of the cast. “OK, not so bad,” I thought to myself.

While painless, the machine was intimidating. One nice touch that helped was that CTCA made the radiation room as serene as possible by having two huge illuminated picture murals of the New Jersey shore on two walls and an illuminated picture of clouds above the machine. If you opened your eyes, you would be staring at a sunny day with pretty puffy clouds. It helped.

So that was pretty much it. That was my routine for the entire 5 1/2 weeks. The only thing that changed is that they did a “booster” on my last three days of treatment. This meant they pointed the radiation beam only at the tumor. During the five weeks prior, they had also aimed it at the surrounding lymph nodes and other target areas in the zone where recurrence could happen.

Throughout these weeks of treatment, every Tuesday I had a standing appointment with my radiation oncologist and his patient assistant to see how I was doing and help with any side effects. This was very helpful, because I soon started to have issues like severe burning and pain while urinating, and diarrhea. Radiation side effects accumulate, so the longer you have the treatments, the worse they get. However, 75 percent of my problems in this phase were related to the chemo pill Xeloda I was taking. It caused big blisters and tenderness on my feet that made it hard to walk. This got so bad that I stopped the chemo pills my entire final week of radiation.

Finally, feeling as if I had climbed Mt. Everest, my last day of radiation arrived on March 2, 2018. I felt pretty awful by then and vomited for the first time that morning. My bum and private area were sore, burned, and a strange purple color from the radiation.

I went through my normal routine one last time, then met with one of the nurses who was going to officially “close out my file.” She gave me post-treatment pointers such as using a SITZ bath to soothe my burned bottom (a plastic basin you put on top of your toilet like a potty trainer that lets you sit in a pool of water), and advised eating plenty of protein to help my body heal quicker. I needed six weeks of rest to let my body recover and for the inflammation to go down before any follow-up exam could be done on me.

As I walked out of the treatment room that last time, I got to ring a bell at the nurse’s station to signal that I finished my treatments. Everyone cheered and clapped. It was very emotional. I sobbed at passing this milestone, and yet also beamed (no pun intended) with pride. I thought to myself, I did it. I survived phase one. Yay, me.

Join me next time when I will talk about two radiation side effects that I didn’t feel prepared for: being put into early menopause, and coping with the little-discussed topic of vaginal stenosis.