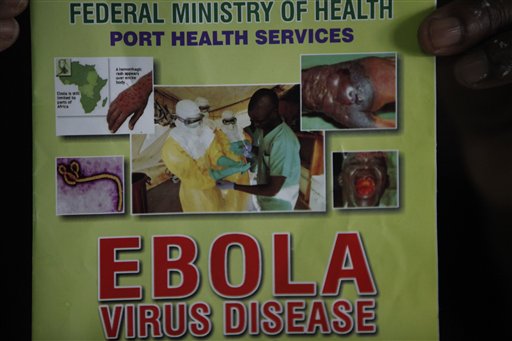 Monday, Aug. 4, 2014. Nigerian authorities on Monday confirmed a second case of Ebola in Africa's most populous country, an alarming setback as officials across the region battle to stop the spread of a disease that has killed more than 700 people. (AP Photo/Sunday Alamba)
Health

What Is Ebola Virus?

An outbreak of the Ebola virus, which started in a rural region of Guinea in West Africa, has now spread to the nation’s capital Conakry. It now reportedly involves 1700 people, of which 932 have died. Additional cases have been reported in Liberia and Sierra Leone, which border Guinea.

The disease caused by the virus is dramatic and awful. It starts with flu-like symptoms – a fever, sore throat, extreme tiredness and muscle pain. Within a few days, nausea, vomiting and diarrhoea develop.

While all this is happening, the virus is also attacking the internal organs, particularly the liver and kidneys. As these organs start to fail, the patient starts to bleed and eventually succumbs to dehydration and blood loss. Of the roughly 2,200 recorded cases of Ebola to date, around 1,500 infected people have died.

A Family of Viruses

The Ebola virus itself was first discovered in 1976, but it’s one of a group of viruses that cause a similar syndrome known as viral hemorrhagic fevers.

There are five strains of Ebola and they vary in terms of how infective and lethal they are. The most significant outbreaks are associated with the Sudan and Zaire strains; the latter is implicated in this outbreak.

The largest outbreak involved 425 people in 2000 in Uganda, and the 2003 outbreak in Congo had a mortality of 90%, making it one of the most dangerous viral infections described. Nonetheless, in absolute numbers Ebola is regarded as uncommon, even compared to some other viral haemorrhagic fevers. And it’s almost insignificant compared to some of the major health problems in the region.

Ebola is thought to originate in fruit bats and initial cases in humans result from contact with infected animals, including chimpanzees, gorillas and monkeys. But outbreaks like the current one occur because of human-to-human spread.

The good news, if there is any, is that spread of the virus is controllable, and it’s probably not as infectious as you might think from watching films about virus outbreaks.

Unlike SARS (severe acute respiratory syndrome), which spread quickly from contact with droplets and contamination of the environment and was difficult to control even in developed countries such as Singapore and Canada, Ebola requires contact with infected body fluids. This means it only generally spreads to close contacts of infected people – mainly family members, health-care workers and people involved with preparing bodies for burial.

All this may sound rather simple – after all, standard precautions are what’s generally recommended for all patients in Australian hospitals. But the challenges involved in caring for patients in outbreaks are significant.

People with viral haemorrhagic fever bleed and vomit, and these fluids are potentially infectious. Training for health-care workers, particularly in areas where Ebola has previously been unknown, is unlikely to adequately prepare them for recognising or caring for infected patients, or for the strict infection control procedures required to prevent spread.

And there’s a bigger problem still; Ebola infections tend to occur in places where the health infrastructure is extremely limited.

I was once told that no patient with Ebola had ever had a chest X-ray. Not because it wasn’t relevant (in some haemorrhagic fevers, leakage of fluid into the lungs can be an important finding) but because infections always occur in places without the capacity to do a chest X-ray, one of the most basic of medical tests.

That lack of capacity tends to affect all efforts to control disease outbreaks. Guinea, where the current outbreak is occurring, is also reportedly battling measles, cholera and meningitis.

But all is not lost. The medical aid organisation, Médecins Sans Frontières (MSF), is airlifting in teams and resources to control this Ebola outbreak. It has expertise in these areas through involvement with previous such emergencies.

The organisation has noted that this outbreak poses particular difficulties as cases are being recognised in multiple places in the region, which are also far apart, complicating efforts to control the epidemic. And because the virus’ incubation period can range up to three weeks, we won’t know how successful the current control measures are doing for a while.

Let’s hope current local and international efforts to control the spread of Ebola will stop more people getting infected.

Allen Cheng receives funding from the NHMRC. This article was originally published on The Conversation. Read the original article.