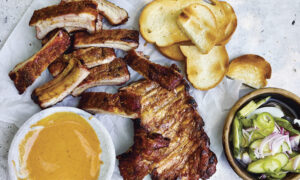 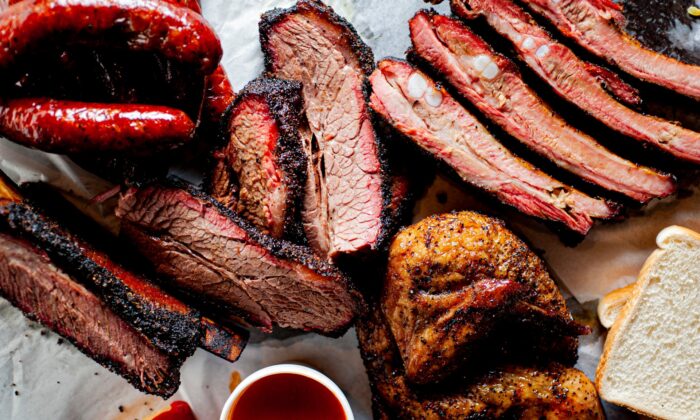 Barbecue encompasses an enormous range of styles, recipes, and traditions, but the result is always tender, smoky, melt-in-your-mouth beef. Or pork. Or chicken or lamb. (Marie Sonmez Photography/shutterstock)
Food & Dining

What Is Barbecue? A Brief Introduction

Whether you spell it barbecue, barbeque, BBQ, or Bar-B-Q, there’s much to sort out when trying to distill the origins of the term and a universally accepted meaning for it, let alone a recipe.

But leaving aside the Australians’ term for the grill (a couple of shrimp on the barbie?), and the definition as a social gathering one attends to consume the resulting food, barbecue—the chosen spelling for the sake of this article—has come to ever so loosely apply to meats slow-cooked over lower temperatures, with a lot of smoke, and often indirect heat. The result is tender, smoky, melt-in-your-mouth beef. Or pork. Or chicken or lamb. Perhaps bison. But definitely meat—unless it’s shrimp, but that’s just another exception we’ll get to later.

The word itself comes from the Spanish barbacoa, which in turn is borrowed from the language of the first people the Spanish conquistadors encountered in the Caribbean, the Taíno, who spoke an Arawak language. This was not a written language, and transliteration and even definitions vary. Some sources say it meant “sacred fire” and referred to a pit for smoking food. Others argue it is a reference to a structure of sticks with a variety of purposes to keep something up off the ground, be it a sleeper (like a bed) or a slab of meat (like a grill).

The best thing I’ve read so far, however, is an article in which Joe O’Connell of the California BBQ Association interviews Peter Guanikeyu Torres, president and council chief of the Taino Indigenous Nation of the Caribbean and Florida, and an actual Taíno. Torres explained that Ba-Ra-Bi-Cu was composed of four root words, together meaning “the beginning of the sacred fire father,” and that barabicoa refers to the stick structure for suspending cooking meat, while barabicu indeed means “the sacred fire pit.”

The method works with any type of meat, even those tougher cuts. The long, slow cooking time allows enzymes in the meat to break down and thus tenderize tough connective tissue.

As the meat temperature goes above 120 degrees F, those enzymes stop working and muscle fibers contract and release moisture, an effect lessened by the weakened tissue. As the heat hits 160 degrees, those released juices bond together with collagen in the tissue to form gelatin, so that by the time the temperature rises over 200, the muscle fiber comes apart and mixes with gelatin and rendered fat to make the meat quite delicious and tender.

It’s not unlike a slow cooker in the kitchen, but with the benefits of smoke flavor—which varies with the type of wood—and the Maillard Reaction—the browning process that reduces surface proteins to amino acids that react with sugars for that flavorful crust, especially enhanced by sauces or spice rubs.

Dry barbecue is as simple as it sounds: Dry refers to the dry seasonings mixed and rubbed into the meat beforehand. The salt and sugar are the two most important ingredients, drawing out liquids and offering sugars for the Maillard reaction, and the other herbs and spices define the maker’s signature flavor.

Wet barbecue is an addition of sauce, applied near the end of the process, offering more caramelization and tangy flavors. Put on too much and for too long, though, and it burns.

We throw around the phrase “falling-off-the-bone-good,” but according to serious barbecue aficionados, that’s not quite right. For ribs, for example, the meat should be tender of course, but with just enough pull to hold the bone gently and yet come away clean and without a struggle. Brisket should bend a bit without splitting, but come apart easily if you tug at either end of a slice. Juicy is desirable, not dry—especially a risk with chicken—and a tasty crust or bark is key.

To Each Their Own

Needless to say, European settlers in North America picked up the practice. Now, the answer to “What is proper barbecue?” varies greatly and passionately based on where you’re asking, with lines drawn even within the same state.

In eastern North Carolina, barbecue sauce was born, mixing cider vinegar with cayenne, black pepper, and other spices. Head west a bit and ketchup is added to the mix as a tomato base for Lexington-style sauce. Cross the border to South Carolina and you find a mustard base.

Brisket is king in Texas and is prepared with “mop” sauce, named for the way it is added to the meat. Based on beef stock, mop sauce typically contains Worcestershire sauce, vinegar, and garlic for starters, and has a thin consistency.

Recipes in Kansas City also bring in Worcestershire sauce and vinegar, but may add brown sugar, soy sauce, and other spices. It’s not unusual for a BBQ joint to offer a whole variety of sauces, with options sweet, tangy, or spicy. Ketchup and molasses give Kansas City-style sauces a sweeter, heavier consistency, while a bit of liquid smoke adds to the wood flavors.

In Memphis lies the heart of the wet or dry debate, even competing on the same menu or between neighboring BBQ joints. The city also hosts the World Championship Barbecue Cooking Contest. Pork ribs and pulled pork are the norm in Memphis, either smothered in tomato and vinegar-based sauce or seasoned with onions, garlic, paprika, cumin, and other spices, and served dry. Sauces are always an option on the side.

St. Louis has its own style of ribs: spare ribs with the cartilage trimmed off for easier eating.

In Alabama, white sauce is the norm: mayonnaise, vinegar, and pepper, blended for use on chicken.

Finally, one of my favorite “barbecue” recipes is from New Orleans. As one can see from the other homes of barbecue, the meat is paired with a sauce, something so critical to the dish that we have barbecue sauce that stands as a condiment beyond its original purpose. New Orleans barbecue shrimp gets its moniker from the sauce, rather than the cooking method. Fresh shrimp are sautéed or simmered in a sinful sauce of butter and olive oil, Worcestershire sauce, lemon juice, garlic, and various other seasonings (rosemary? thyme?), then served with rice or French bread to mop up every last drop. It’s not a replacement for the smoker, mind you, but a fine alternative that you can cook up in 20 minutes rather than 20 hours.