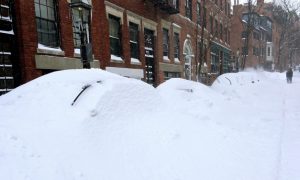 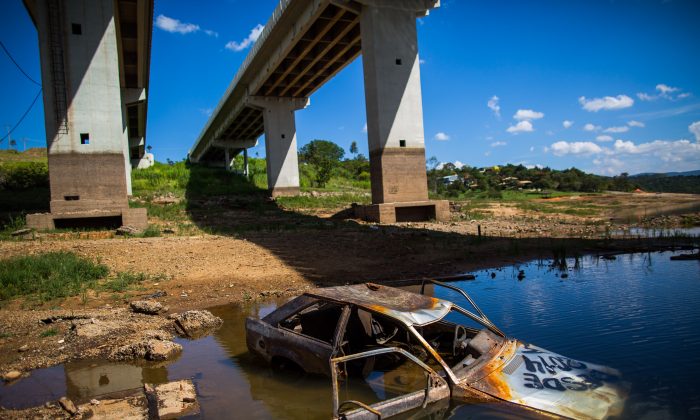 A shell of a car is seen with a text that reads in Portuguese: "Welcome to the desert of Cantareira" on the banks of the Atibainha reservoir, part of the Cantareira System that provides water to the city of Sao Paulo, Nazare Paulista, Brazil. (Victor Moriyama/Getty Images)
Americas

The historic drought gripping South America’s largest nation is deepening, leading to rationing and forcing residents in one of the world’s biggest cities to hoard water.

As reported by Reuters, besides hoarding, Brazilians in Sao Paulo are drilling homemade wells and implementing additional emergency measures ahead of forced rationing that could lead to water being shut off at taps for as long as five days a week.

In Sao Paulo, a major metropolitan city of 20 million, the main water reservoir has fallen to just 6 percent of its capacity, and the peak of the rainy season has recently passed.

The drought is more heavily concentrated around Sao Paulo, but other cities in Brazil’s southeast, which is heavily populated, are also facing shortages and could eventually experience some rationing as well. Rio de Janeiro, a favorite tourist spot, is one of the cities that is facing less dire drought conditions.

Uncertainty over the drought and its consequences on jobs, public health and overall quality of life have further darkened Brazilians’ mood at a time when the economy is struggling and President Dilma Rousseff’s popularity is at an all-time low.

The height of Brazil’s rainy season falls in January, and this year rainfall was substantially less than normal. Because of that, officials in Sao Paulo have warned that they may have little choice but to cut off water supplies to customers for perhaps five days per week — an extreme measure that could last until next year’s rainy season, which begins in October, if not later.

The current drought in Brazil is the worst in nearly a century, officials have said.

State officials have yet to decide whether to implement strict rationing, partly because they are still hoping for heavy rains in this month and into the next. In recent days, rainstorms have actually led to a rise in some local lakes.

The current drought in Brazil is the worst in nearly a century.

That said, independent projections hint that Sao Paulo’s primary reservoir, Cantareira, may run dry as soon as April, if there are no major cuts in consumption. And because of that potentiality, many Sao Paulo residents have begun hoarding water now, while they can still get it.

Large hospitals in Sao Paulo are installing in-house water treatment and recycling centers, among other measures, to make sure they can still carry out surgeries and other essential tasks if regular supply stops.

In the meantime, local companies are in a competition to secure deliveries from water tanker trucks, already a common sight on the congested streets of Sao Paulo, as they struggle to keep the water flowing in the dry city.

“It’s like seeing 10 liters in your gas tank and knowing you won’t make it to the next station,” Stefan Rohr, the environmental director for industry group Ciesp, in Campinas, a large city of more than 3 million people just north of Sao Paulo, told Reuters.

There are a number of heavily water-intensive industries, like beverage makers, steel manufacturers and cellulose producers, that made water acquisition contingency plans long ago. They plan to either truck in water or use underground wells, ensuring, perhaps, that there is no major economic crisis to accompany the drought.

Smaller operations and businesses, however, such as restaurants, car washes, beauty salons and light industries, could close or otherwise restrict activities in a major way.

“The economic impact will be job losses,” Rohr said.

Officials with Sabesp, Sao Paulo’s state-controlled water utility, told Reuters they weren’t sure when or even if rationing would be implemented. State Gov. Geraldo Alckmin, whose popularity has also plummeted as a result of the water crisis, declined to be interviewed by Reuters.

However, a member of the Brazilian president’s Cabinet told the newswire service earlier in February on condition of anonymity that there will likely be some degree of water rationing in three of Brazil’s largest metro areas: Sao Paulo, Rio de Janeiro and Belo Horizonte, home to about 40 million people.