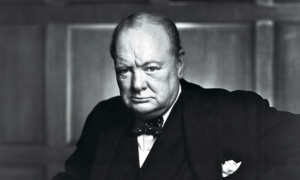 One soldier's journey to opening up began with a story about a gift from his son. (Petrenko Andriy/Shutterstock)
Mind & Body

When I was accepted to speak in the red circle for my first TEDx talk back in 2016, it was hard for me to take the stage. The scars from my transition out of the military were still too raw, too uncomfortable. I needed to face them head-on, and I had to do it fast. So I started working with a performance coach named Joe (not his real name).

Joe quickly saw that my biggest challenge was the mindset I had developed against opening up about my emotions in front of other people. Like most veterans, I had been doggedly trained to always put armor over my feelings. To always show the brave face. To never show weakness. It’s what we had to do to survive.

One day in rehearsal, he looked down at my wrist and asked about the thin green bracelet I was wearing. “That’s my magic silly band,” I told him. I shared with him the story of how my youngest son Brayden had given it to me before I deployed to Afghanistan back in 2009 when he was just 5 years old. He told me it would keep me safe while I fought the bad guys. It was our connection to each other while I was half a world away.

I never took it off.

“Scott, that’s the kind of emotional access I need you to have with every story you tell. Here is your homework. I want you to write a 5-minute play about that silly band and tell it at our next student performance night.”

I was dumbstruck. A play?! In that moment I would have rather deployed back to Afghanistan. What if I fell apart on stage? There was one thing that I felt sure of and it was that Green Berets did not write plays.

They said that the whole room stood with thunderous applause when I was done, but all I saw were the tears running down the faces of my wife Monty, and our three sons.

I had found my voice again. And for the first time in a long time, I knew what I had to do next.

After two long years, dozens of revisions, and countless acting classes later, my mid-life crisis was complete. That silly band became the heart of “Last Out: Elegy of a Green Beret,” a play that is currently touring across America raising awareness for veterans’ and military family issues.

I’ve learned some powerful lessons about the generosity of scars on this tour that have radically changed my mindset, allowing me to take off the emotional armor for the first time in 23 years and leave it at the door.

Scars are a wound that has healed, but left us marked. They are story we can tell others, to let them know that their wounds will also heal, and that others have felt their pain.

Hundreds of chronically isolated veterans and military family members have shared with me, through tears, the relief of seeing their own pain validated on our stage. One sister of a Green Beret sergeant major stood up after a show and said, “Thank you for showing me in 85 minutes what my brother has been trying to tell me about this war for the last five years.”

My oldest son, Cody, was just 3 years old when the towers fell. He’s been telling me his whole life that he wants to grow up and be a Green Beret, just like me. That was a tough one for me. How could I allow my son to go fight a war that I couldn’t finish? I thought that if I could just deploy one more time and do what it took to end this war, I could keep him safe. Yet, every time I came home from deployment, he was one year older, and one step closer.

Don’t get me more wrong here. I couldn’t be more proud of his service, but, I’m speaking to you as a dad who has seen a lot of war. After 18 years, it is the longest war in our country’s history. Many of our politicians commit a small percentage of our sons and daughters to conflict as casually as a teenager starting another video game of Fortnight.

And most of our people are oblivious to it.

So the scar of my son fighting a war that I couldn’t finish is incredibly uncomfortable and something I tried for years to avoid having to face. But, thanks to Joe, I adopted a new mindset, one that let me finally take the armor off and stand on that scar in the service of others and open the eyes of thousands of citizens, media, and even a few of those politicians to the emotional cost of modern war so we can have a more responsible conversation about future conflicts.

How can your scars make a difference to someone in the darkness who needs to hear the lessons you’ve earned?