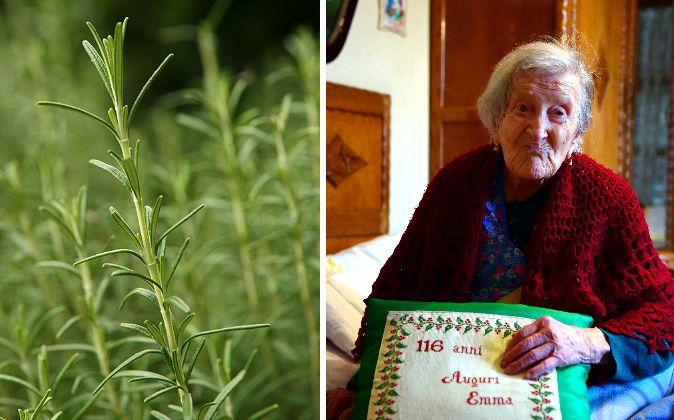 Want to Live Forever? Have Some More of This Delicious Herb

Researchers believe that a staple food in the Mediterranean diet could be the secret to living a full century after finding some 300 centenarians in a remote Italian village.

As reported by the UK’s Daily Mail Online, the herb rosemary is in very commonly used by a group of retirees who have not only lived to be a remarkable age but have done so free of common ailments like heart disease, Alzheimer’s and others.

For the first time, teams of medical researchers and experts were granted permission to examine residents in a coastal village called Acciaroli, which is situated near the resort city of Salerno.

Tucked between the ocean and the mountains, Acciaroli and the surrounding region have only a few thousand residents. However, among that small population is an outsized number of men and women who are at least 100 years old, and some are older.

As further reported by the Daily Mail Online:

This is a phenomenal ratio compared to, for instance, America where just 0..02 per cent of the population will live that long.

It is believed that factors for their long life and low rates of both mental and physical illness include the famously healthy Mediterranean diet that is popular throughout the region.

First Time Rosemary Is Linked to a Longer Life

Rosemary, however, is very prevalent in what residents in the area cook, according to researchers from the University of California, San Diego, School of Medicine and the University of Rome, who are conducting the study.

There are likely other factors influencing how long many residents of the region are living, including fresh air and walking – residents walk regularly or hike through mountains or to work as part of their daily routines.

“We are the first group of researchers to be given permission to study this population in Acciaroli, Italy,” said San Diego doctor and professor Alan Maisel.

He said that the research teams will examine and analyze lifestyles, take blood samples and distribute questionnaires to the 300 centenarians living there.

“The goal of this long-term study is to find out why this group of 300 is living so long by conducting a full genetic analysis and examining lifestyle behaviours, like diet and exercise,” Maisel added. “The results from studying the longevity of this group could be applied to our practice at UC San Diego and to patients all over the world.”

“Recent studies have now confirmed what the Greeks knew long ago. Rosemary contains an ingredient that fights off free radical damage in the brain. This active ingredient, known as carnosic acid (CA), can protect the brain from stroke and neurodegeneration that is due to toxins and free radicals which are thought to be one of the contributors to stroke and conditions such as Alzheimer’s and dementia.”

According to research that was published at the time in the Journal of Neurochemistry and Nature Reviews Neuroscience, CA activates a signaling pathway that serves to protect brain cells from being damaged by free radicals.

“Two of its components, caffeic acid and rosemarinic acid, are potent antioxidant and anti-inflammatory substances that help diminish inflammation, an important factor in asthma, liver disease or heart disease,” we reported. “The Cancer Research Institute of Slovakia has come to the conclusion that rosemary helps protect DNA from free radical deteriorations, hence a possible aid in the fight against cancer.”