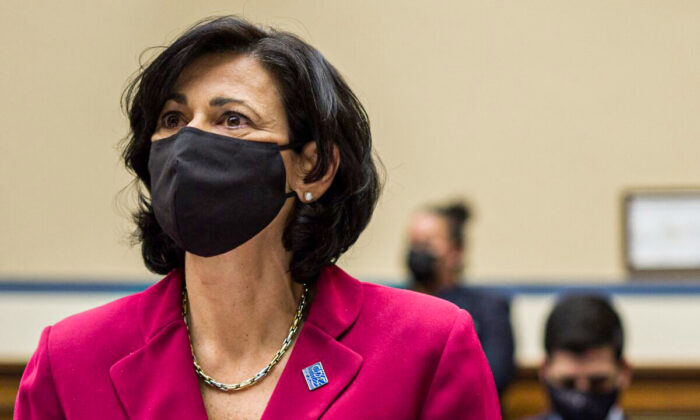 Dr. Rochelle Walensky, director of the Centers for Disease Control and Prevention, is seen during a congressional hearing in Washington on April 15, 2021. (Amr Alfiky/Pool/Getty Images)
Health News

Walensky: PCR Tests Can Remain Positive for up to 12 Weeks

One reason for not recommending officials require COVID-19 testing at the end of the revised shortened isolation period is because polymerase chain reaction (PCR) tests can stay positive for up to three months after one contracts the illness, according to the top Centers for Disease Control and Prevention (CDC) official.

The CDC cut its recommendations this week in half for people who contract COVID-19, the disease caused by the CCP (Chinese Communist Party) virus. The agency also removed a testing recommendation for leaving isolation.

The CDC doesn’t set policy, but its guidelines are widely adopted across the United States.

Some experts criticized the moves.

“By not including a testing requirement, there will be a lot of infectious people in the workforce transmitting the virus to the others—further increasing the public health risks and likely economic disruptions.”

Dr. Rochelle Walensky, head of the CDC, responded to critics during a Dec. 29 briefing.

The shortened time period, she said, was due to studies demonstrating that people are most infectious after getting SARS-CoV-2, another name for the CCP virus, during the two days before symptoms develop and during the three days after they develop.

“After five days, the risk of ongoing transmission substantially decreases,” she added.

The CDC did not respond to a request for the studies that were referenced. Several studies published last year indicated a window similar to that outlined by Walensky.

The lack of a testing piece, the CDC director continued, stems from PCR tests potentially coming back positive months after people initially get COVID-19.

“We know that PCR testing would not be helpful in this setting as people can remain PCR-positive for up to 12 weeks after infection and long after they are transmissible and infectious,” she said. Antigen tests, which yield results sooner but are widely known to be less reliable than PCR tests, may not “give a good indication of transmissibility at this stage of infection,” Walensky added.

Health officials have also pointed to the dominance of the Omicron variant of the CCP virus, which is more transmissible than earlier strains but also appears to lead to fewer cases of severe disease on average, as the reason for the adjusted requirements.

Another key factor is worries that industries could be left without an adequate number of workers.

“The purpose of it was, given the wave—the extraordinary, unprecedented wave—that we are experiencing now, and will certainly experience more of in the next few weeks, there is the danger that there will be so many people who are being isolated who are asymptomatic for the full ten days, that you could have a major negative impact on our ability to keep society running. So the decision was made, although it’s not completely risk-free, of saying let’s get that cut in half,” Dr. Anthony Fauci, head of the National Institute of Allergy and Infectious Diseases, said on CNN this week.

While many experts said the adjusted isolation recommendations weren’t strong enough, others praised the updates.

“We know most people do most of the spreading in the first five days, so I thought this was a good way to reduce the burden of a 10-day isolation and get people back out there with their families sooner,” Dr. Ashish Jha, dean of the Brown University School of Public Health, said on Newsmax.