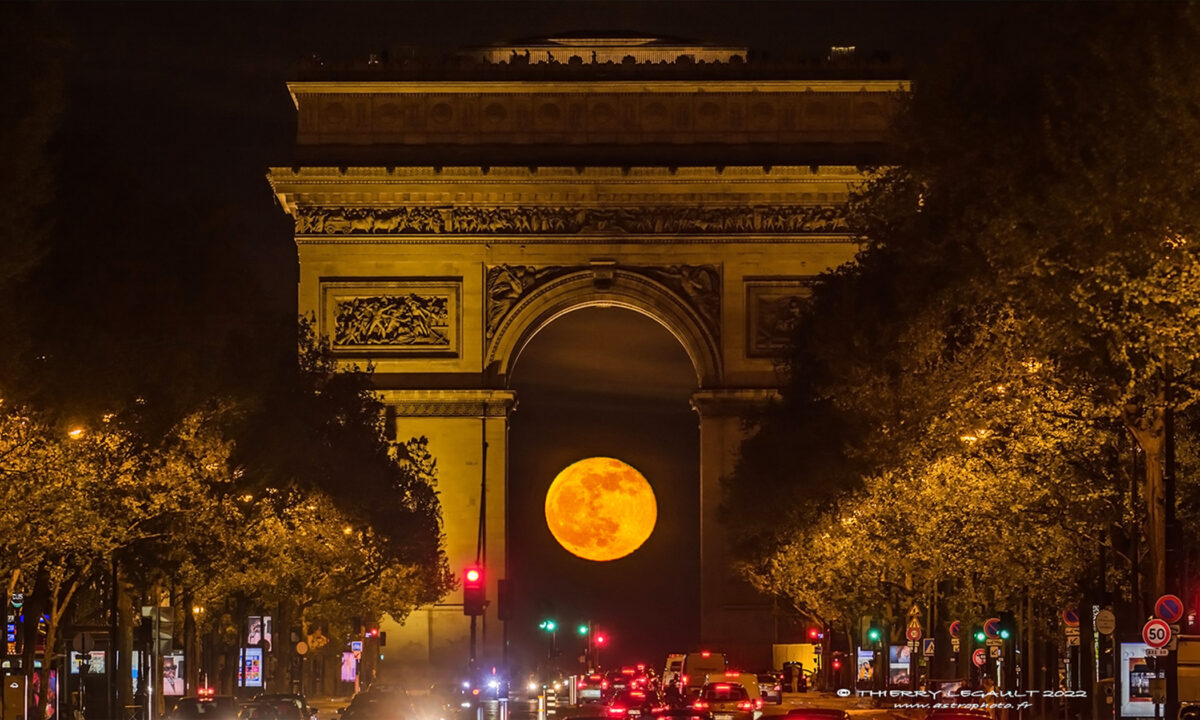 A triumphal achievement in astrophotography came to fruition one clear spring night when Thierry Legault captured this jaw-dropping moment of the full moon gleaming gloriously through the Arc de Triomphe in the heart of Paris.

Like a modern-day Stonehenge, the moon aligned perfectly with the monument, hanging just below the great arcades of that magnificent ode to revolutionary freedom. Its grandiose 96-foot vault (the Arc itself standing momentously at 164 feet) mirrors the shining lunar sphere—glowing golden just over the horizon—with artful perfection.

The author of this photo, Legault, an aeronautical engineer residing near Paris, takes all his pictures with a single exposure—none of that composite, blended image jazz, so common on Instagram nowadays, for this Frenchman artist.

“This is my photographic ethics!” he proudly declared to The Epoch Times. “My shots are always done with one camera, from one place at one time, and I never edit or composite. Only one photo, except for the time-lapse [videos] of course.”

Legault is one of the original photographers to get on the digital train in 1993, when the first optical sensors began appearing for amateur use. “At that time, everything was to be explored and there was no shortage of subjects: the deep sky—galaxies, nebulae, etc., as well as the planets, the moon, the sun, etc.,” Legault said. “It was a time of pioneers and we were still few in number because the astronomical devices we had at the time, although equipped with very small sensors, were very expensive.”

Legault was tutored by one of the great lunar photography specialists of the day. New digital techniques enabled both to accelerate refinement of their craft to undreamt of new heights.

Timing is a huge part of snapping images like this of the moon and Arc de Triomphe. “For position calculations, I use applications such as Stellarium, PhotoPills, The Photographer’s Ephemeris, Google Earth,” he said. “We can thus know in advance in which direction and at what height the moon will be at each instant, and determine if it is going to be in the direction of a monument chosen in advance.

“The observation point also comes into play, and this is where prior reconnaissance is essential to ensure that this point will be well accessible, if you can set up your tripod there, and if there are no obstacles—buildings, trees, posts, traffic lights, etc.”

Time is of the essence when the moment is nigh. Legault prepares his settings in advance or else risks losing the alignment. “I only had a few seconds,” he said.

Weather, of course, also plays a significant role, one that no photographer can control. “I missed a lot of events because of clouds!” he said. “But a light veil of clouds can also help to attenuate the light of the full moon, which is much brighter than the monuments; it helped me in particular during an alignment of the moon on the Empire State Building.”

Legault’s astrophotography and time lapses can be found on YouTube and in numerous media publications, including the one he is proudest of, The Times, which in 2009 published his shot of the International Space Station transiting the sun.

Here are more photos by Thierry Legault, including said Empire State-moon shot, a moon and Eiffel Town coupling, and the Arc de Triomphe again, but with the sun, for an encore.