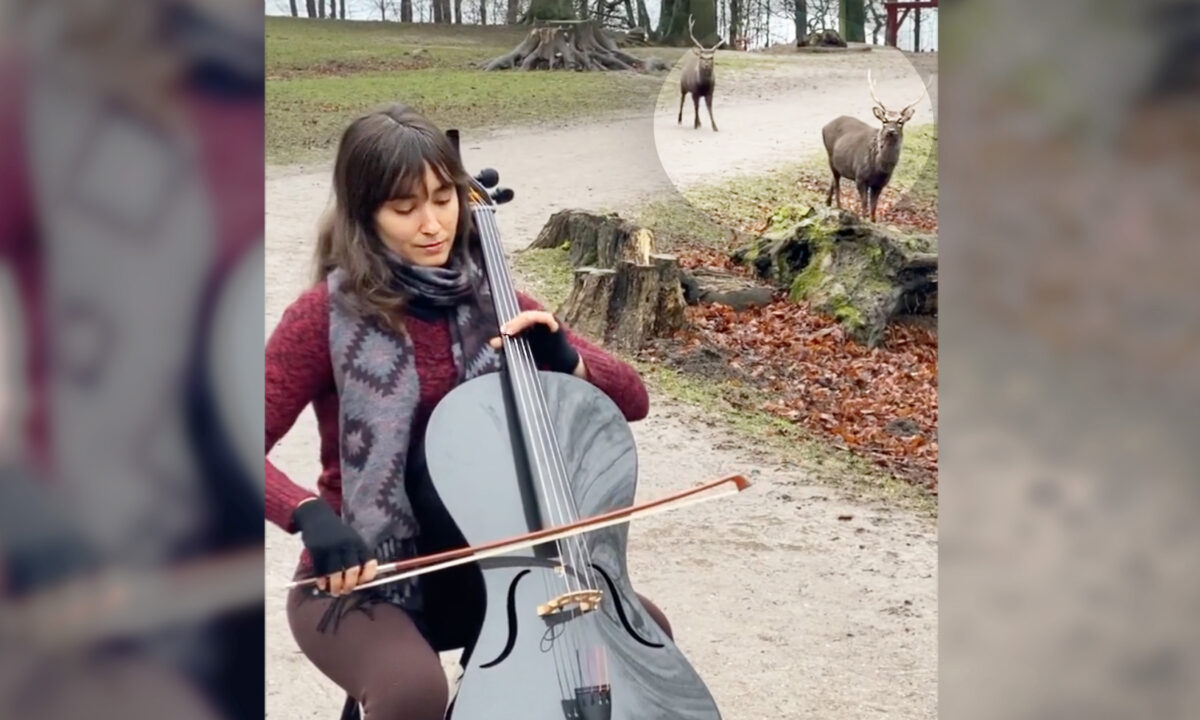 VIDEO: Pair of Deer Enchanted by Cellist’s Music Wander Up to Hear Her Playing Bach in the Park—And Go Viral

Along rustic streets, a young senorita musician from southern Spain often performed her cello before delighted crowds in her hometown of Murcia.

But while passersby were frequently attracted by the sound of Bach’s “Suite No.1” emanating from her stringed instrument, recently a pair of unlikely antlered patrons found themselves equally drawn by the magic of her melody.

That senorita, Diana Gómez, 28, has spent 15 years honing her craft at a conservatory, learning the cello since she was just 8. “My mom wanted me to learn music, so I’m a musician thanks to her, and obviously thanks to my dedication and my perseverant practice every day,” she told The Epoch Times. “At that time, I was too young to know I like music. I discovered that many years later when I grew up.”

Diana does play gigs professionally, but that’s not where she makes most of her money. “I’m an independent artist, self-employed. I play gigs, but at the moment, my main income comes from my street music shows,” she explained. “I usually perform on the street.”

She continued: “I usually play pop cover songs with my cello. I use a loop station to create the harmony and the rhythm. Sometimes I use a piano backing track as an accompaniment while playing the melody with the cello.”

Her street shows have now stopped, though, as playing street music with amplification in Madrid, where she’s lived for the past five months now, has been banned.

However, that hasn’t stopped wildlife from enjoying Diana’s music out of doors; again playing Bach, last December, a pair of antlered deer appeared in the background scenery behind her. Perked up at attention at hearing the strange and wonderful vibrations in the air, they took a few steps in her direction.

As Diana continued to play, the pair slowly wandered nearer.

“Wild deer were in front of me when I saw them and I just sat down near them and started to play my cello,” Diana recalled. “As you can see in the video, I turned while I’m playing to watch their reaction, and I see they are watching me as they walk toward me. When I finished playing, I realized one of them was still and staring at me. It was amazing to see I caught his attention!”

Videos like this one have gone viral on social media video platforms before—such as those with elephants or cattle enthralled by talented pianists or violinists and swaying along merrily with the sounds. Nature is in tune with and attracted to harmonious vibrations for some mysterious reason.

Likewise, the video of Diana and the deer have also attracted much attention on social media. After it was posted online, the video garnered well in excess of 4 million views with hundreds of thousands of likes and comments.

Diana shared, “People have reacted incredibly good to my video. It’s been viral on TikTok and Instagram.” Some netizens have even called her the “new Snow White,” because of the way she harmoniously attracts woodland creatures with her sweet euphony.

“I felt I was living in a magical moment. Those animals are impressive and they seem to enjoy the music,” she said. “I haven’t experienced this before with wild animals.”