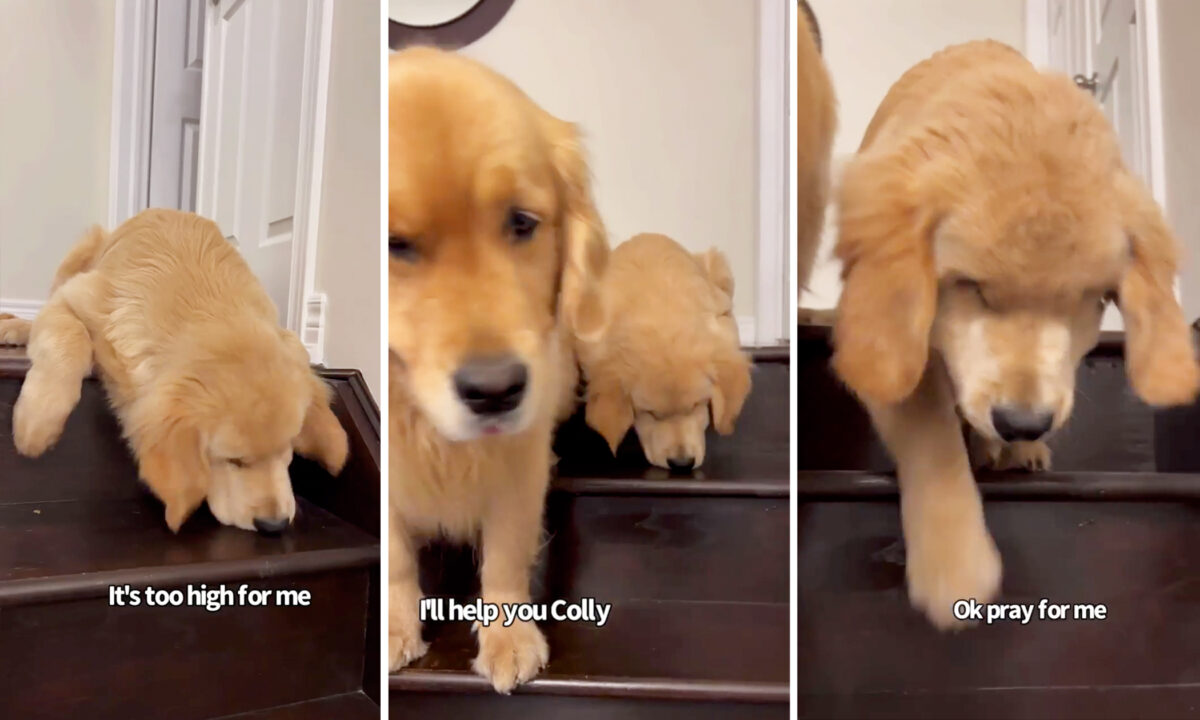 A golden retriever, not entirely convinced about his new puppy brother, finally softened when the young pup got stuck at the top of the stairs. The older, wiser dog ran to his aid, and the “firm buddies” have been inseparable since.

Diane Newton of Toronto, Canada, decided her 4-year-old golden retriever, Sterling, needed a playmate after watching him lie around on his own after his morning walks. In August 2021, a puppy named Colin joined the family.

“I can’t say Sterling was very happy when we first brought Colin home,” Newton, 56, told The Epoch Times. “He was the only child, used to getting the attention. Colin tried his best to get Sterling to interact, but he was having none of it; we were worried if we’d done the right thing.”

Newton caught the whole thing on camera and saw light at the end of the tunnel.

Watch Sterling helping Colin learn how to climb down the stairs:

(Courtesy of Life of Sterling Newton)

“We tried not to force Colin on him, and it worked,” she recalled. “He warmed up to him more and more once he realized he wasn’t being replaced. Now they are firm buddies, and love to play, wrestle, and even cuddle together.”

The “calm, loving” Sterling now loves hanging out with his 9-month-old brother. They run together, hike together, play fetch together, and snooze together at the end of an eventful day.

“They are both typical retrievers. They love to carry things around in their mouths, and both love to greet family members with an old object, usually a sock or a shoe, and sometimes a toy,” said Newton. “Sterling makes the cutest noises when he does a stretch, and Colin does a super cute ‘spinning dance’ when he is ready for his breakfast.”

Newton, originally from Blackpool, England, describes herself as a “full-time dog mom” who runs social media accounts for her dogs. She chronicles their strong bond and daily antics on Instagram, running one page for Sterling, and another for Colin.

Newton initially feared her followers wouldn’t like the addition of a new dog to the family, but she had nothing to worry about.

“The response was overwhelmingly positive,” she said. “People have loved watching Colin grow and their relationship blossom.”