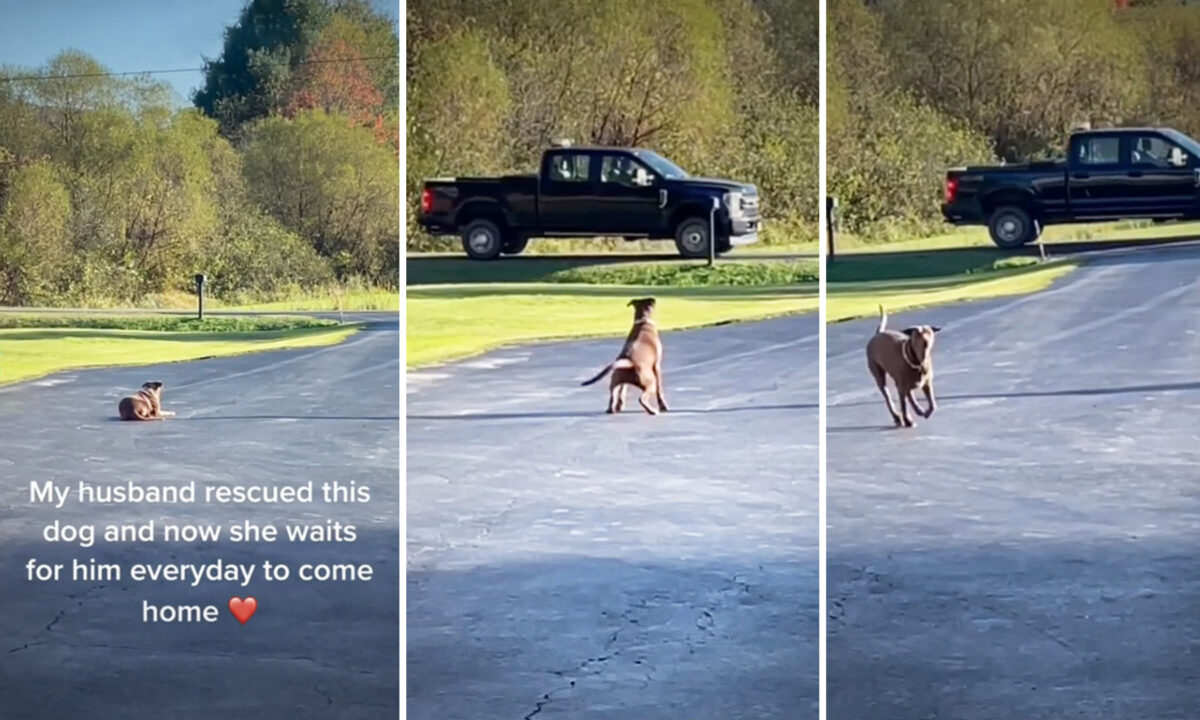 VIDEO: Loyal Dog Rescued From Mine Waits in Driveway for Dad to Return From Work Every Day, Goes Viral

There’s just something about the way Sadie Kate sits, and lies, patiently waiting for her rescuer to come home, that melts the heart—1.8 million hearts, in fact.

The TikTok video posted by Sara Fitzwater showing the devoted dog fixed in the same spot outside the house all day, watching for Sara’s husband Tim’s truck to appear, was an instant hit on the video sharing site, now creeping up on 2 million likes.

With a whopping 14.6 million views, to date, Sara told The Epoch Times of her reaction to the clip going viral:

“I had no idea that video would get so much attention,” she said. “It’s crazy how many people have watched it and commented.

“I just thought it was cute that she waits on him.”

People all over the globe did, too—thousands stating their thoughts and feelings, with comments such as:

“Who rescued who?” “She hit the jackpot,” and “Thank you for rescuing this angel.”

Sara, a case manager for a mental health agency, and Tim, a state mine inspector, live in West Virginia. He was visiting a mine site when he noticed Sadie.

“She’d been hanging round the mine for a few months; someone probably dropped her off there,” Sara said.

Tim interacted with the dog at the mine for around a month before, in Sara’s words, “he finally gave in and brought her home.”

Neglected physically and emotionally, Sadie slept for several days when the Fitzwaters brought her to live with them and their two other dogs.

Sara said, “We have other dogs so she’s not lonely, but she just wants to wait on Tim to get back.”

Working from home a few days a week, Sara started noticing Sadie just sitting in the driveway, where Tim parks his work truck, and watching.

“When I go outside, she will run to me and interact with me but she always goes back to the same spot to wait on Tim,” she said.

The bond that man and dog share is clear.

“She immediately took to Tim,” added Sara. “She would smile at him when he talked to her.

“I tell her all the time she hit the lottery when she smiled at Tim.”

The couple can’t be sure of Sadie’s exact breeding, but one TikTok user, claiming to be a groomer, suggested she may be a Chesapeake Bay retriever—or “Chessie”—known for their intelligence and free-thinking, which can be interpreted as stubbornness. One thing is for sure: Sadie Kate is not giving up her sentry post on the driveway anytime soon.

With lots of green open space to run around in and a stable, loving family, Sadie has left the mine far behind her and found her forever home.

If only she knew how many people around the world love her now, too.