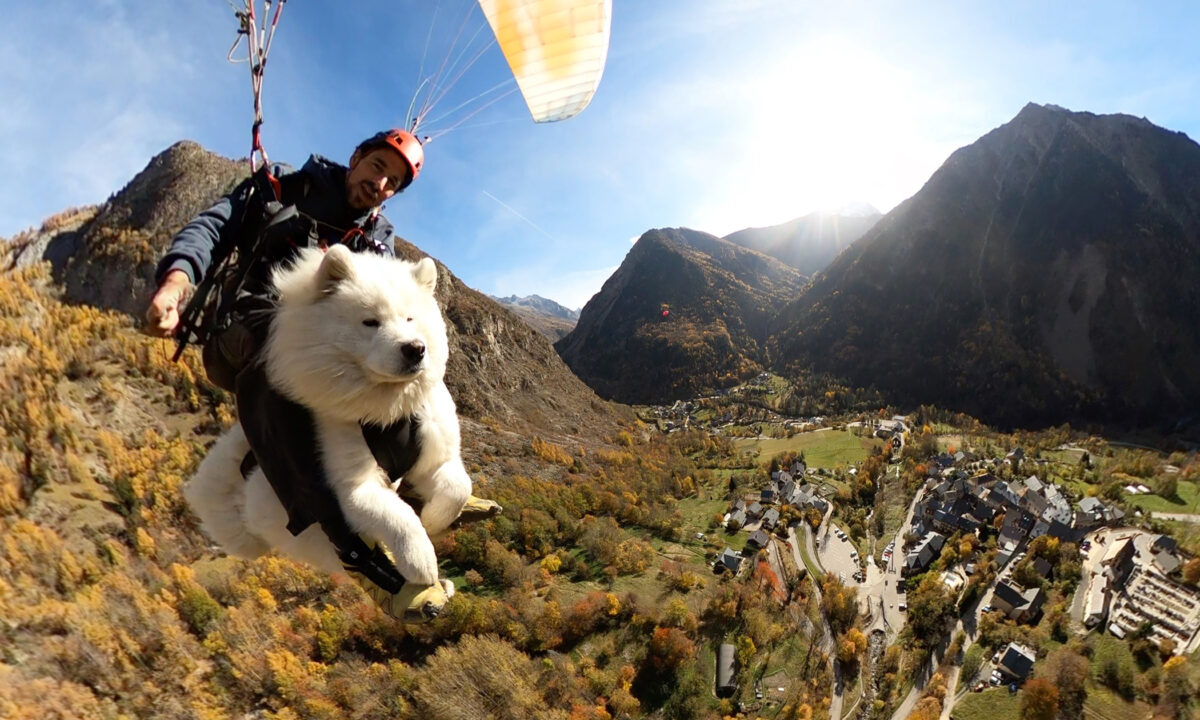 Delighted to find out his fearless dog also had his eyes on the sky, an experienced paraglider commissioned a custom harness to allow the pair to paraglide safely together. As the pup’s enjoyment soared, so did their adventures.

“I knew it was possible, as many pilots have already taken their dogs with them in the air,” Shams told The Epoch Times. “One of my favorite paragliding activities is to hike to the top of a mountain and fly down, so as Ouka is a sled dog by nature, I immediately thought it would be super cool to hike somewhere—faster, thanks to Ouka—and fly down together!”

Watch Shams and Ouka paragliding together:

Watch them taking off and landing:

Shams took careful steps over the course of months to ensure Ouka was able to fly.

“First, I noticed he was not afraid of heights; when walking on the edge of a cliff, he loves to look down and observe everything,” said Shams. “Then, we stayed with the van on a paragliding takeoff, and he saw pilots flying every day. Then, I started to play on the ground with my own glider around him so he could get used to the sound, the movement, and what he can and can’t do.

When Ouka started running between Shams’s legs during takeoff drills, Shams knew he was ready. He trialed a dog harness belonging to a friend with a dog roughly the same size as Ouka, and the Samoyed seemed so “chill and comfy” that Shams later commissioned a made-to-measure harness of his own.

The pair started with a seconds-long flight to test their tandem takeoff and landing skills, and for Shams to observe Ouka’s reactions. The pup took to the air like a duck to water.

The pair increased their flight time to one minute, then five, then 10, then 30.

Shams reflected, “Our story is quite remarkable. I was in a big depression when I adopted Ouka, who had been abandoned two times. One big surprise has been receiving so many messages saying that we help people feel better. I guess, without noticing it, as Ouka helped me, I share my emotions and feelings about this, and other people can feel it, too.”

While in the air, Ouka is calm and looks around, said Shams. After landing, he waits for his owner to remove his harness before running around and seeking cuddles from other pilots landing nearby.

“Ouka never showed any signs of fear or anxiety,” Shams said. “As he has to come between my legs on my voice command, if he didn’t want to fly, he just wouldn’t come.”

The French native first tried paragliding with friends, for fun, and soon found himself addicted. He claims it’s “difficult to say” when he mastered the technique as he is still learning today, but considers himself a good pilot as he knows his limitations.

Shams quit a Ph.D. in computer graphics to become a full-time film director and cinematographer, specializing in adventure and extreme sports, and had been traveling the world for four years in his van when the pandemic hit, forcing him to return to Europe. But paragliding is his ticket to freedom.

“Paragliding is the easiest way to fly,” he said. “Imagine, you can carry your airplane on your back! It is completely silent, just the sound of the wind in your ears. It is slow, relaxing, and calm. We are not jumping from a cliff; everything is smooth. You run, and then without noticing it, you are flying like a bird.”

Shams, who does not compete, has nonetheless flown all over the world. He cites gliding 6,500 meters above the mountains of Pakistan and an aerial view of Polynesia’s blue lagoon as two of his favorite memories, but claims hiking to any summit and gliding back down to his van is an equally amazing achievement.

His fearless, fun-loving Samoyed is the perfect companion.

“I never thought a dog would change my life so much, to be honest, but we are very happy together,” said Shams. “We never did anything for the fame and the likes. We’ll keep doing what we do, just because we like this lifestyle.”