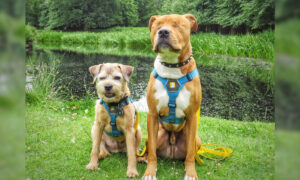 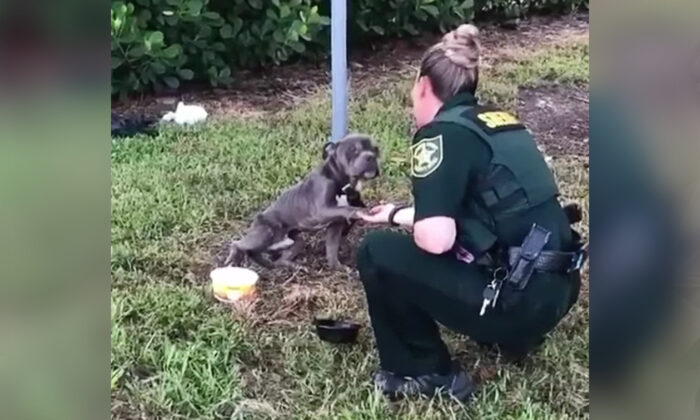 An abused, abandoned dog found tied to a pole had every reason to snap and snarl when a stranger approached. Instead, the pup placed his paw into the hand of the police officer who greeted him, then freed him, and whisked him away to a better life.

Florida dog rescuer Amy Roman works with police and animal control to save dogs in need. Her rescue project 100+ Abandoned Dogs of Everglade Florida got a call from law enforcement Aug. 9 telling her of the abandoned dog in Pompano, Broward County.

“The dog was literally skin and bones,” Amy told The Epoch Times. “He was just so weak, so neglected, so emaciated, head-shy, due to the fact that he definitely was beaten.”

In the footage, officer Angela Laurella of the Broward County Sheriff’s Office (BSO) approached the pup. “She went toward the dog and she put out her hand to make sure he was accepting,” said Amy. “Immediately, as she crouched down and put out her hand, he put out his paw to say, ‘It’s okay, and I know you’re here to help me.’”

Laurella tossed a treat to the starving pup before untying him. The dog “walked with his frail little body” all the way into a holding cell at the sheriff’s office. Amy said “yes” to taking him in without pause, despite being over capacity.

Amy shared the footage, along with a plea for donations, on Facebook, and it went viral, garnering over 30 million views.

Upon receiving the 3- to 4-year-old, 17-pound pocket bully—whom they named Liam—Amy and her team discovered how sick he really was. He guzzled water so fast that he vomited, and staffers had to use a “maze bowl” to slow Liam down as he ate his kibble.

“He was inhaling the food because he was so starved,” Amy told The Epoch Times.

He was taken to a veterinarian for blood work and X-rays before heading to an eye specialist. Owing to malnourishment, his eyes were sunken in. He also needed dental work. But more than anything, the dog who never held a grudge needed love and patience.

Two weeks later, the once-neglected pup was thriving, and had gained “a good 10 to 15 pounds,” according to Amy.

With the dog’s former owner still at large, BSO is offering a reward for information on the culprit. At the time of writing, nobody has come forward.

But, someone did come forward for Liam.

None other than an officer named Alexandria from the sheriff’s office, who’d been following Liam’s journey through social media, welcomed him into her home in Coconut Creek. She called Amy to arrange a meeting, and the dog rescuer quickly saw it was a match made in heaven.

While Liam is “super dog-friendly,” Amy feels his new dog-free home will be the perfect space for his ongoing recovery as “all the attention is on him.”

They can barely believe he’s come so far, given the heart-wrenching state he was found in.

“I would say for the most part, with all the love we’ve given him in such a short time, he’s made a miraculous recovery,” said Amy. “We are confident that he’s going to have the most amazing life.”