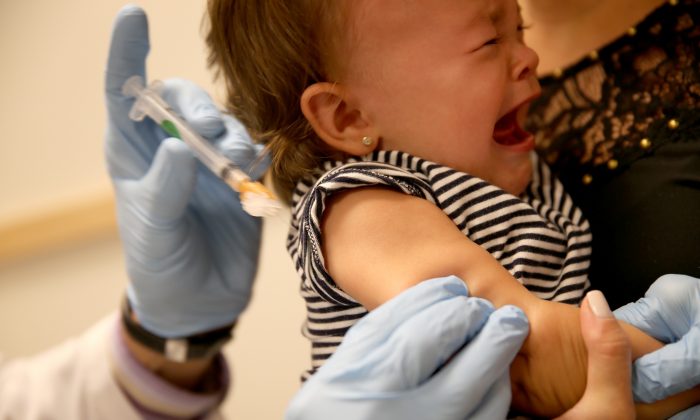 In this file photo, a baby cries as a pediatrician administers a measles vaccination during a visit to the Miami Children's Hospital on June 02, 2014 in Miami, Florida. (Joe Raedle/Getty Images)
Health News

Vaccinegate: CDC Whistleblower Admits Claims of Data Fixing Were True, Complains at Being Recorded and Outed

CDC whistleblower Dr. William Thompson has, after a week of silence since his role in manipulating data for a CDC study came to light, issued a press release via his attorney clarifying his position.

Thompson confirmed the main issue, which was data manipulation conducted inside the CDC to hide a causal connection between the MMR vaccine and autism, when the vaccine was given in the first 36 months to African American boys.

The release opens with this unambiguous admission of what some are calling “fraud,” and others are calling “data tampering:”

“I regret that my coauthors and I omitted statistically significant information in our 2004 article published in the journal Pediatrics. The omitted data suggested that African American males who received the MMR vaccine before age 36 months were at increased risk for autism. Decisions were made regarding which findings to report after the data were collected, and I believe that the final study protocol was not followed.”

He goes on to say that he is cooperating with Congressman William Posey, “… and will continue to cooperate with congress.”

On Aug. 19, Dr. Thompson’s voice was first heard, blurred, around the world in a controversial video produced by Autism Media Channel, saying he deeply regretted and felt “great shame” for his part in a data scrub aimed at hiding “sensitive results” that pointed to MMR vaccines spiking autism risk in African American boys.

On Aug. 21, Autism Media Channel re-released the video, with the voice de-blurred and with Thompson named.

While the media ignored the story of the reluctant CDC whistleblower, social media exploded with interest. On Aug 26, the hashtag # CDC Whistleblower trended # 2 on Twitter, driven primarily by passionate groups of parents, who say they witnessed their children regress into autism and other disorders, the moment they got certain vaccinations.

Media, and blogs hostile to “anti-vaxxers,” if they said anything at all, speculated the CDC whistleblower was “a fake.”

Thompson also expresses his belief that vaccines have saved “countless lives,” and adds, “I would never suggest that any parent avoid vaccinating children of any race.”

He ends the release by stating that his colleagues at the CDC have been “entirely professional since this matter became public,” denying earlier reports from the alternative press that he had been escorted off the CDC campus. He adds that he even got a “performance-based award” after the story came out, and “no pressure or retaliation.”