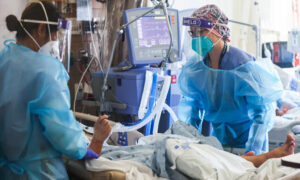 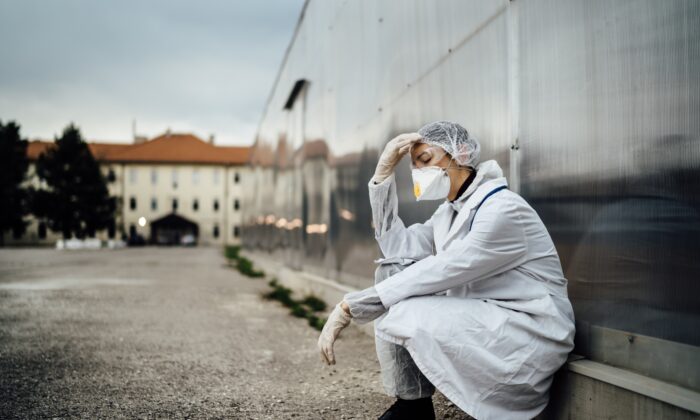 For some hospitals, a lack of a vaccine mandate could become a competitive hiring advantage
By Lauren Weber

In the rural northeastern corner of Missouri, Scotland County Hospital has been so low on staff that it sometimes had to turn away patients amid a surge in COVID-19 cases.

The national COVID-19 staffing crunch led to hospital CEO Dr. Randy Tobler hiring more travel nurses to fill the gaps. And the prices are steep—what he called “crazy,” with rates of $200 per hour or more, which Tobler said his small rural hospital can’t afford.

A little more than 60 percent of his staff is fully vaccinated. But even as COVID-19 cases rise, a vaccine mandate is out of the question.

“If that becomes our differential advantage, we probably won’t have one until we’re forced to have one,” Tobler said. “Maybe that’s the thing that will keep nurses here.”

As of Sept. 2, about 39 percent of U.S. hospitals had announced vaccine mandates, said Colin Milligan, a spokesperson for the American Hospital Association. Across Missouri and the nation, hospitals are weighing more than patient and caregiver health in deciding whether to mandate COVID-19 vaccines for staffers.

The market for health care labor, strained by more than a year and a half of coping with the pandemic, continues to be limited. While urban hospitals with deeper pockets for shoring up staff have implemented vaccine mandates and may even use them as a selling point to recruit staffers and patients, their rural and regional counterparts are left with hard choices as cases surge once again.

“Obviously, it’s going to be a real challenge for these small, rural hospitals to mandate a vaccine when they’re already facing such significant workforce shortages,” said Alan Morgan, head of the National Rural Health Association.

Without vaccine mandates, that could lead to a desperate cycle: Areas with fewer vaccinated residents likely have fewer vaccinated hospital workers as well, making them more likely to be hard hit by the Delta variant sweeping the United States. In the short term, mandates might drive some workers away. But the surge could also squeeze the hospital workforce further as patients flood in and staffers take sick days.

Rural COVID-19 mortality rates were almost 70 percent higher on average than urban rates for the week ending Aug. 15, according to the Rural Policy Research Institute.

It all comes back to workforce shortages, especially in more vaccine-hesitant communities, said Jacy Warrell, executive director of the Rural Health Association of Tennessee. She noted that some regional health care systems don’t qualify for staffing assistance from the National Guard, as they have fewer than 200 beds. A potential vaccine mandate further endangers their staffing numbers, she said.

The mandates are having ripple effects throughout the health care industry. The federal government has mandated that all nursing homes require COVID-19 vaccinations or risk losing Medicare and Medicaid reimbursements, and industry groups have warned that workers may jump to other health care settings. Montana has banned vaccine mandates altogether, and the Montana Hospital Association has gotten one call from a health care worker interested in working in the state because of it, spokesperson Katy Peterson said.

The combination of burnout and the added stress of people leaving their jobs has worn down the health care workers that the public often forgets about, said interventional radiology tech Joseph Brown, who works at Sutter Roseville Medical Center outside of Sacramento, California.

That has a domino effect, Brown said: More of his co-workers are going on stress and medical leave as their numbers dwindle and hospitals run out of beds. He said nurses’ aides already doing backbreaking work are suddenly forced to care for more patients.

“Explain to me how you get 15 people up to a toilet, do the vitals, change the beds, provide the care you’re supposed to provide for 15 people in an eight-hour shift and not injure yourself,” he said.

In Missouri, Tobler said his wife, Heliene, is training to be a volunteer certified medical assistant to help fill the gap in the hospital’s rural health clinic.

Tobler is waiting to see if the larger St. Louis hospitals lose staff in the coming weeks as their vaccine mandates go into effect and what impact that could have throughout the state.

In the hard-hit southwestern corner of Missouri, CoxHealth President and CEO Steve Edwards said his health system, headquartered in Springfield, is upping its minimum wage to $15.25 an hour in order to compete for workers.

While the estimated $25 million price tag of such a salary boost will take away about half of the hospital system’s bottom line, the investment is necessary to keep up with the competitive labor market and cushion the blow of the potential loss of staffers to the hospital’s upcoming Oct. 15 vaccine mandate, according to Edwards.

“We’re asking people to take bedpans and work all night and do really difficult work and maybe put themselves in harm’s way,” he said. “It seems like a much harder job than some of these 9-to-5 jobs in an Amazon distribution center.”

Two of his employees have died from COVID-19. In July alone, Edwards said 500 staffers were out, predominantly due to the virus. The vaccine mandate could keep that from happening again.

“You may have the finest neurosurgeon, but if you don’t have a registration person everything stops,” he said. “We’re all interdependent on each other.”

But California’s Brown, who’s vaccinated, said he worries about his colleagues who may lose their jobs because they’re unwilling to comply with vaccine mandates.

California has mandated that health care workers complete their COVID-19 vaccination shots by the end of September. The state is already seeing traveling nurses turn down assignments there because they don’t want to be vaccinated, CalMatters reported.

Since the mandate applies statewide, workers can’t go work at another hospital nearby without vaccine requirements. Brown is frustrated that hospital administrators and lawmakers, who have “zero COVID exposure,” are the ones making those decisions.

“Hospitals across the country posted signs that said, ‘Health care heroes work here.’ Where is the reward for our heroes?” he asked. “Right now, the hospitals are telling us the reward for the heroes: ‘If you don’t get the vaccine, you’re fired.’”

Lauren Weber, Midwest correspondent, is covering how America’s health system is working—and not working—for patients in the region. This article was originally published on Kaiser Health News.