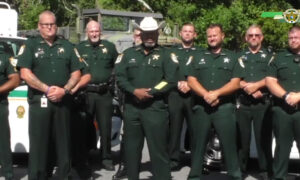 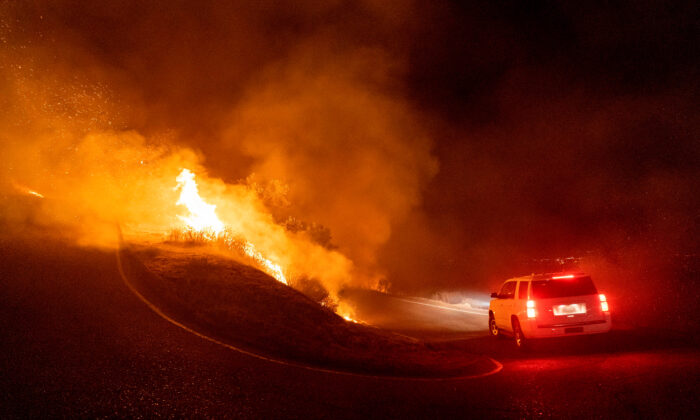 On the night of Knolls Fire on June 28, a sheriff’s deputy was working at the south end of the blaze when he came across two people fleeing on foot from a second flareup fire.

The officer is now being credited for saving their lives due to his quick actions.

Deputy John Thomas from the Utah County Sheriff’s Office noticed the small flareup at the south end of the fire, burning near Saratoga Springs along State Road 68—that later came to be called the Mile Marker 17 Fire.

He also spotted a man and woman fleeing on foot and immediately contacted his dispatch, FOX13 reported.

“Can you confirm with fire if they have people just south of the Knolls that just started another fire?” Thomas is heard radioing to base in a video released by the sheriff’s office. “We just had a large flare-up down here with a couple of individuals running away.”

The pair had driven off-road in an effort to bypass a road closure due to the fire and get back to Saratoga Springs, Sgt. Spencer Cannon had told KSL.com.

“They had cut through a fence and driving along they essentially had a crash,” he said. “They went down into a ravine, got the truck stuck, the truck started to leak gas and it caught fire, and that’s what started the fire there that this deputy had seen.”

The two were “running for their lives,” the sheriff’s office stated in a Facebook post on Monday, adding that the 21-year-old woman’s hand, face, and much of her body were “badly burned.”

“The problem was the fire was catching up to them faster than they were running,” Cannon shared.

In normal procedures, the deputy would have called for medical assistance; however, the situation was urgent. Thomas got the two persons in his patrol vehicle and drove them to the highway, about a mile away, to safety.

The woman was then flown to a local hospital to receive treatment and remains hospitalized, while the 21-year-old man was unharmed during the incident. He was charged with criminal mischief and trespassing.

The sergeant added, “Without his actions, there’s no doubt at all that that fire would have caught up to them, and they most likely would not have survived the fire.”

After the incident, Thomas was publicly recognized by the Utah County Sheriff’s Office for his life-saving actions.

“It does mean a lot,” Thomas told FOX13. “I don’t feel like my actions were any different than anybody else’s actions but I do really appreciate it and it does mean a lot to me.”