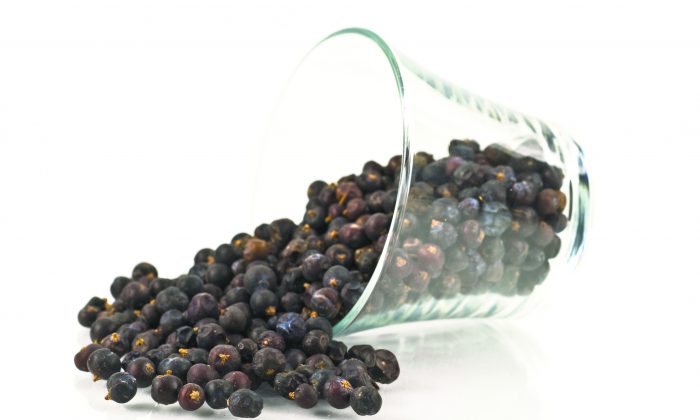 Uses of Juniper From Plague Antidote to Martini Mix

Juniper (Juniperus communis) is a small tree or shrub thought to be a native of the Mediterranean, though it has a wide distribution and is found growing wild in North America, right across northern Europe and in the north and west of the Himalayas.

Juniper has a long history of medicinal use dating back to the time of the ancient Greeks, when physicians used it to ward off infectious diseases like the plague, among other things. The berries of the juniper are the parts employed medicinally. They are picked after the second year of growth and when fully ripe. At this stage they have a purplish-blue color, drying to black.

Right up until more recent history, physicians reportedly chewed these berries as an antiseptic barrier when they were treating epidemic infections. While we do not use juniper berries for this purpose today, its effectiveness in this respect can be attributed to its volatile oils which contain antibiotic, antiviral, and antifungal properties.

Herbalists today prescribe juniper most specifically for those people who suffer from fluid retention as a result of kidneys that do not move fluid waste through quickly enough. In extreme cases, these people retain lots of fluid around the thighs, ankles, and feet making walking uncomfortable and difficult. They may also retain fluid around the upper arms, under the chin, and around the waistline.

Many diabetics suffer from this set of symptoms, as fluid retention can often be triggered by an imbalance in adrenal hormone production, or indeed may even be the cause of a disturbance in adrenal function.

The oils present in juniper berries formed the basis of the manufacturing of gin and gave the drink its characteristic pungent, oily sweet flavor, along with its diuretic qualities. The potassium compounds found in juniper berries gave this drink a toning and relaxing effect on muscles and would be a welcome relief after a long hard day of physical labor. Those potassium compounds may also be responsible for the relaxed tongues well known to those who have indulged in one too many gins.

The laws of nature dictate that too much of a good thing will have the opposite effect. This principle was taught in orthodox chemistry and formalized as the Arndt-Shulz law.

Nowhere is it more apparent than with the symptoms that can develop as a result of long-term heavy gin drinking: sluggish and waterlogged kidneys, muscle weakness, lapses in nerve signals, incontinence, fluid retention, and eventual heart symptoms. These are of course the very same set of symptoms for which an herbalist will prescribe juniper berries in extract or tincture form.

If these set of symptoms describe you, then you can add juniper berries to the occasional casserole dish to add flavor and stimulate your kidneys towards better fluid excretion and flushing out the bladder. The action can be powerfully stimulating so don’t overdo it and tip the balance in the other direction.

If you suffer from kidney stones, do not self-medicate with juniper berries, as the powerful stimulus to kidneys can begin to move stones and even to expel small particles of stone, which may cause discomfort. Let a professionally trained herbalist decide how much, and if at all, juniper berries may benefit you.