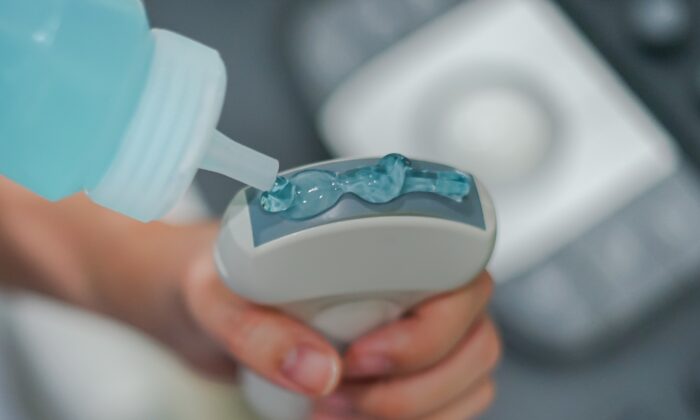 Ultrasounds have changed how we see—literally—fetal problems within the womb before the baby is born. But this helpful technology brings its own issues. (Pang_Oasis/Shutterstock)
Health News

Unexpected Side Effects of Ultrasound Gel

In 2017, Emalee Morem was 40 weeks pregnant with her first child. At the urging of her providers, she had an extra ultrasound, just to make sure the baby was OK. After the scan, Morem and her husband went out for lunch. But sitting in the sunshine on the patio at the restaurant in Minneapolis, Minnesota, Morem started to feel uncomfortable.

“My belly felt very hot while we were eating,” Morem says, “and when I got home, I looked at my belly and saw this horrible red, patchy rash.”

Though the rash wasn’t painful, Morem was concerned.

“It didn’t hurt, but it obviously wasn’t normal,” she says. “And I’m sure it was from the ultrasound gel. After the ultrasound they just wiped my belly with a dry paper towel or cloth, so my belly didn’t get washed off well, I could still smell the gel on my skin, and the rash was exactly where they’d had the gel and doppler.”

The discomfort, Morem says, was short-lived.

“It went away after a few hours, but it freaked me out at the time. I was afraid of getting more ultrasounds, too.” Two weeks later, Morem gave birth to a healthy 7-pound 14-ounce baby girl.

Could the gel that caused a topical rash on Morem’s abdomen be problematic for another reason? Our bodies use hormones—chemical signals—to regulate many different processes. Endocrine disruptors are chemicals that alter our normal hormone levels. Phthalates and certain phenols—including parabens and triclosan—are considered endocrine-disrupting chemicals.

Because pregnancy, like puberty and menopause, is a time of enormous hormonal changes, it’s especially important to steer clear of hormone disruptors. Indeed, studies have shown that unnatural changes in hormone levels can contribute to many negative health effects—especially when it comes to reproduction and fetal development.

While each formulation varies by brand, research suggests that some of the gels used to conduct prenatal ultrasound scans may be causing hormone disruption. These thick gels are slathered over a woman’s abdomen to provide a continuous liquid medium for the sound to pass through, without air bubbles that would disrupt the signal. They contain a variety of fragrances and dyes, as well as a chemical called propylparaben, which is a phenol—a chemical compound extracted from coal tar. Ultrasound gels may also contain phthalates, used to bind the fragrance and the color.

Dr. Carmen Messerlian and her colleagues in the Department of Environmental Health at Harvard University sought to uncover whether exposure to ultrasound gel disrupts the endocrine system. They published their results, “Ultrasound gel as an unrecognized source of exposure to phthalates and phenols among pregnant women undergoing routine scan,” in the International Journal of Environmental Health in 2017.

Teaming up with clinicians from Massachusetts General Hospital, Messerlian’s team analyzed the urine of a dozen pregnant women who were already participating in a fertility study. As part of the fertility study, the women were all undergoing one routine ultrasound in the second trimester.

So the Harvard scientists took three urine samples from each woman: One before the scan, a second sample one to two hours after the scan, and a third urine sample 7 to 12 hours later.

Each urine sample was then sent to the Centers for Disease Control and Prevention where CDC scientists then analyzed them for the presence and quantity of 19 different phthalates and 11 different phenols.

The analysis found that phthalates reached peak concentrations in the pregnant women’s urine at approximately 7 to 12 hours after exposure to ultrasound gel. In addition, the concentration of almost all the chemicals tested in the women’s urine was highest in the third urine samples, nearly eight hours after the scans.

Since all of the pregnant women tested reportedly ate something or used some kind of personal care products (which often contain endocrine-disrupting chemicals), this may have affected the results.

However, the consistency in timing across all 12 study participants suggests that high phthalate concentrations in the women’s urine were due to ultrasound gel exposure.

How Does Ultrasound Work?

Prenatal ultrasound uses sound waves to create an image of a pregnant woman’s growing baby while the baby is still inside the womb.

“Ultrasound is super high-frequency sound waves we cannot actually hear; it’s basically based on the same principle as radar or echolocation,” said Dr. Lise Eliot, a neuroscientist at Rosalind Franklin University of Medicine and Science, when I interviewed her several years ago.

“You put out a sound and if there’s something in the environment, it will reflect back on that. They reflect the sound waves through the mother’s abdomen and the baby is the structure that reflects the sound waves. With the technology, you can take the reflected sound waves and create a two- or three-dimensional image of the child.”

A Routine Part of Prenatal Care

Ultrasounds are used to find out the baby’s gender and positioning and to look for any anomalies, some of which can sometimes be surgically repaired before the baby is born. The most severe form of spina bifida, myelomeningocele, can be operated on during gestation, for example. At the same time, if an ultrasound uncovers that a fetus has a severe medical condition or a genetic anomaly that is not compatible with life, doctors will often recommend terminating the pregnancy.

Once used sparingly, ultrasound has now become a routine, unquestioned part of standard medical prenatal care. In fact, ultrasounds during pregnancy are considered such an essential component of modern maternity care that the majority of obstetricians believe it would be “impossible” to provide high-quality maternity care without doing them.

A woman who chooses not to get any ultrasounds—either because she would never choose abortion or because she has concerns over the safety, necessity, and reliability of the procedure—is often met with unabashed astonishment and pushback from her providers.

American women enjoying healthy pregnancies will routinely have four to five ultrasounds per pregnancy, regardless of risk. Pregnant women who are considered “high risk,” can expect to be told they need an ultrasound scan at every appointment.

I interviewed one New Jersey mom, Jen Simon, who had 30 ultrasounds during her first pregnancy. Even though she was only 5 feet 3 inches tall and her husband just 5 feet 6 inches, their New York City-based doctors told the Simons they needed so many ultrasounds because the baby was too small. “I was told I was lucky I wasn’t getting three a week,” Simon said.

“If you’re low-risk, there’s honestly very little justification for doing more than one,” says my colleague and co-author, Dr. Paul Thomas, a pediatrician based in Portland, Oregon. “Even one ultrasound may not be necessary, unless your plan would be to abort a non-viable fetus.”

Reasons to Be Cautious

At the same time, there is a growing body of scientific evidence linking exposure to ultrasounds in utero to brain challenges and other health problems in young children.

For example, a 2016 study published in the journal Autism Research by scientists from the University of Washington examined the records of 2,644 children with autism. These scientists found that boys exposed to ultrasound in the first trimester had more severe autism symptoms, including decreased IQ and increased repetitive behaviors, than babies who hadn’t been exposed.

Research conducted by Dr. Manuel Casanova, professor of biomedical sciences at the University of South Carolina, has also shown that early exposure to ultrasounds can trigger ill-timed migration of brain cells that can lead to brain disruption and autism.

One way to avoid exposure to endocrine-disrupting ultrasound gel is to tell the ultrasound technician that you don’t want to use the standard ultrasound gel. Bring some organic coconut oil with you to your appointment and ask the technician to use that instead. Some technicians will also simply use water to make the transducer move more easily instead of the gel provided. Problem solved.

And Thomas says you can take some simple steps to make an ultrasound scan less risky for your growing baby. Many technicians may not be aware that obstetric guidelines stipulate that ultrasounds should be done for the least amount of time at the lowest possible setting. This is called “ALARA” or “As Low As Reasonably Achievable.”

“If you want to have an ultrasound or your doctor’s really insistent, make sure you ask the technician to check that their machine is set as low as it can be to get the needed image,” Thomas suggests. “Tell your doctor and the tech that you want the ultrasound done at the least possible exposure for the shortest amount of time. These are actually the current guidelines, but most doctors don’t follow them.”