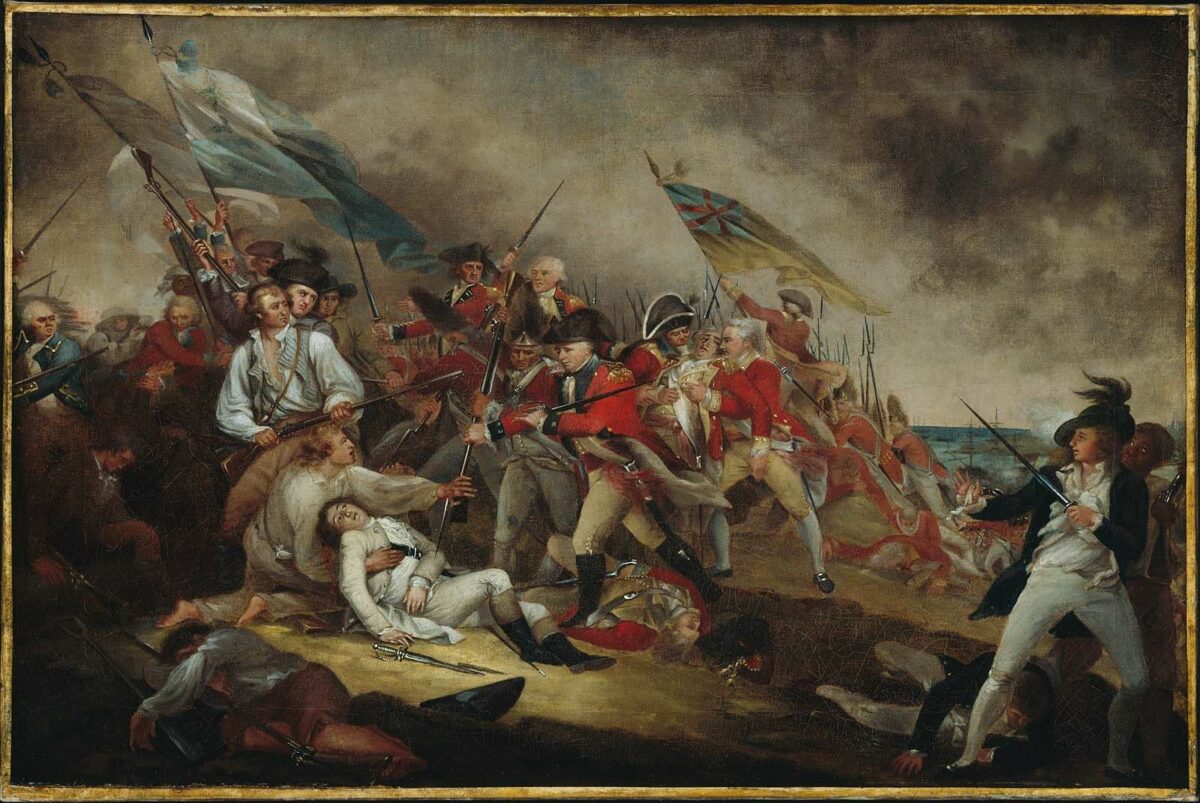 The famous painting depicting the death of founding father Joseph Warren during the battle of Bunker Hill in Massachusetts on June 17, 1775 by John Trumbull. (Public domain)
History

The co-chair of the All-Party Parliamentary Group on War Heritage has called for a “tangible” memorial to the British soldiers and the loyalists who died during the American War of Independence.

Lord Faulkner of Worcester told The Epoch Times, “There is no memorial at the moment to those who died on the British side and that is perhaps something we should talk about, a tangible monument.”

He said the “tone of voice” of such a memorial, on American territory, would have to be respectful to the hosts but he said: “A tangible moment would be a goal. I think it’s a good idea.”

The All-Party Parliamentary Group (APPG) was set up in 2011 in the wake of a successful campaign by MPs and peers to block plans by the Flanders regional government in Belgium for a new road across Pilckem Ridge, a key part of the Ypres battlefield from the World War I.

Work has begun on marking the semiquincentennial—the 250th anniversary of the U.S. Declaration of Independence—in 2026, and the American Battlefield Trust has been in discussions with Britain’s Battlefields Trust and with the APPG on War Heritage about suitable ways of preserving Revolutionary War battlefields as an “enduring legacy” of the commemoration.

The American Battlefield Trust is aiming to protect 11,000 acres in South Carolina and Georgia, which was part of the British Army’s southern campaign between 1778 and 1781.

Howard Simmons, a former chair of The Battlefields Trust in England, told The Epoch Times: “In 1778 the northern campaign grinds to a halt and the British launched a strike in the southern colonies, where there were lots of loyalists. It became a civil war between loyalists and patriots. There was bitter, bitter fighting and they want to preserve 11,000 acres down there which is still unspoilt.”

The American Battlefield Trust’s Director of Communications, Mary Koik, said the southern campaign was largely a war between American neighbours and brothers and she said, at the battle of King’s Mountain in South Carolina in 1780, there was only one person who was born in Britain, and that was the commander of the pro-British force, Maj. Patrick Ferguson.

The American Battlefield Trust—which also covers Civil War and War of 1812 battlefields—has protected 55,000 acres in 24 states, most of which are handed over to the National Parks Service, and is hoping to procure its first site in Ohio later this year.

Koik, said 8,500 regular British soldiers and 1,700 American “loyalists” were killed in action between 1775 and the British defeat at Yorktown in 1781, while many more died of disease or as a result of their injuries.

British Were ‘Enemy’ but Not ‘True Villain’

She said although they were trying to crush the idea of independence, the redcoats were just doing a job and were not “true villains.”

Asked how Americans today see the redcoats, Koik said: “The passage of time does round a lot of corners and it’s much less fractious than something happened in the mid-20th century. They were the enemy but they are more of a philosophical foil than a true villain.”

King George III had actually tried to hire Russian troops from Catherine The Great to fight in America but a deal fell through when she demanded the Mediterranean isle of Menorca in return.

Simmons said the French played a “pivotal” role in the conflict and said: “The Americans would not have obtained the surrender of Cornwallis at Yorktown without the French troops being there. That is unquestionable.”

“But the Americans were also bankrolled by the Spanish and the West Indies were more important to us than America. The Spanish took the Bahamas from us and were about to invade Jamaica and that is part of the reason we signed the deal in 1783 ending the war, because we couldn’t afford to lose Jamaica,” he added.

Simmons said, “The war was a real turning point for Britain.”

He said he hoped American scholars would come to Britain in the run-up to 2026 and examine the “richness” of documents which shed light on the war.

Last month, government minister Lord Sharpe of Epsom said planning for the semiquincentennial was at an early stage but Lord Faulkner suggested one possible way of marking it was to “identify and rededicate the graves of British soldiers” who died, fighting in vain to maintain British rule in what is now the United States.

After the Battle of Princeton in 1777 the British casualties were buried in a mass grave but the exact site has never been found.

But Koik said it was not just British graves from the American Revolutionary War which had not been located.

The Mystery of the Maryland 400

She said: “One of the great stories on the American side is the Maryland 400, a regiment which was given the task of holding back the British so the rest of the American army can escape [during the Battle of Long Island in 1776]. Only a dozen or so men made it back alive.”

Their bodies were buried in trenches but Koik said the grave has not been located: “It’s somewhere in Brooklyn. We don’t know where it is. The current guess is that it is underneath an auto repair shop.”

She told The Epoch Times: “At the height of the war there were 22,000 British regulars in North America, the traditional redcoats, and up to 25,000 American loyalists. There were also German mercenaries, the famous Hessians, and about 1,200 of them died, as well as fighters of the Iroquois Confederacy.”

After the war 5,500 Hessians stayed in America and the majority of loyalists also remained in the United States. Many more moved to Nova Scotia, which remained under the British crown, and a small number moved to British-run islands in the Caribbean or to Florida, which was controlled by the Spanish until 1819.

Several thousand black men, who had been granted their freedom by fighting for the British, went to England after the war.

Simmons said: “An awful lot of the soldiers who fought very bravely were Scottish or Irish. Some returned here and some settled there.”

One of those who survived was John Graves Simcoe, who commanded the Queen’s Rangers in New York—and reputedly massacred 40 Native American allies of George Washington in what is now the Bronx—and later became lieutenant governor of Upper Canada.

A memorial to Simcoe in Exeter Cathedral describes him as a “patriot” and “Christian” and adds, “He served his king and country with a zeal exceeded only by his piety towards his God.”

Chris Summers
Follow
Chris Summers is a UK-based journalist covering a wide range of national stories, with a particular interest in crime, policing and the law.
SHARE
Friends Read FreeCopyFacebookTweet
You May Also Like