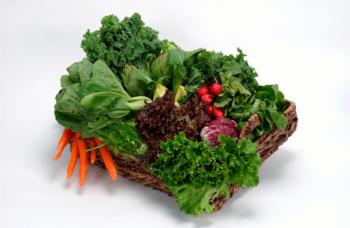 BY Natalie Gee TIMEAugust 27, 2010 PRINT
A new study published in the British Medical Journal shows an extra serving of green leafy vegetables in our daily diet could decrease the risk of diabetes by 14 percent.

This difference was observed between subjects with the highest intake—1.35 servings a day of green leafy vegetables—and people who only consumed 0.2 servings per day, representing the population with the lowest daily intake.

In an accompanying editorial, Dr. Jim Mann of the Edgar National Center for Diabetes and Obesity Research at New Zealand's University of Otago, and Dagfinn Aune of London's Imperial College, cautioned against seeing "green leafy vegetables as a 'magic bullet' for diabetes prevention and forget the broader picture of whole food groups".

However, they added, "the findings are also a useful reminder to clinicians that giving dietary advice may be just as beneficial, if not more so, than prescribing drugs to patients at risk of chronic disease."

{etRelate 32162}Some lesser known members of the group are " 'brassicas', such as cabbage, brussel sprouts, and cauliflower; compositae, such as lettuce; and umbelliferous vegetables, which are plants grown for their leaves and stems and are often consumed as herbs, such as parsley, dill, and fennel."