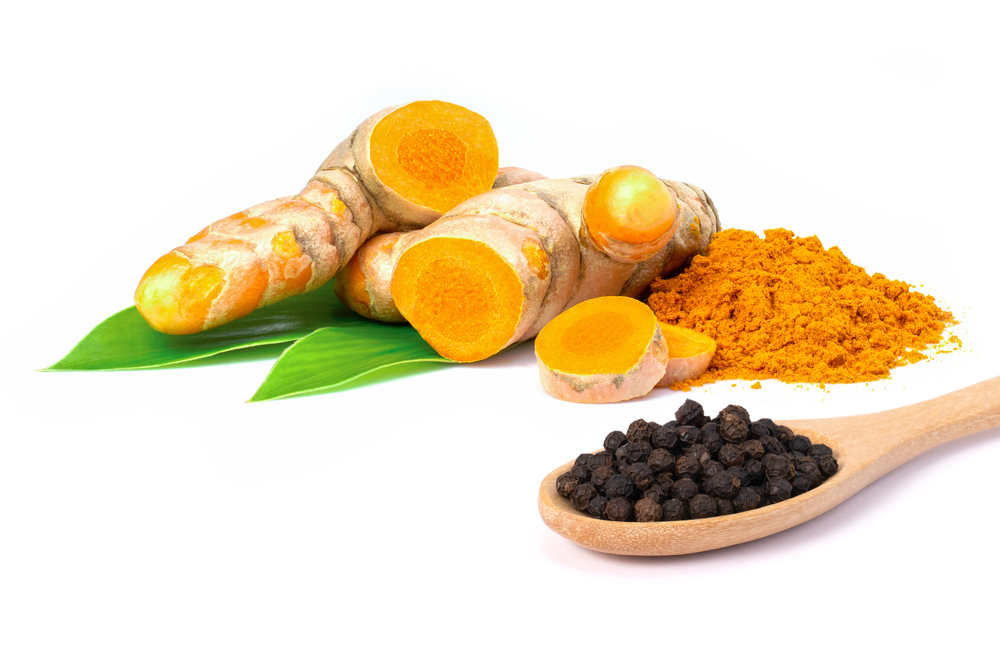 Like the best of teams, adding tumeric and pepper to your daily diet can have wonderful health benefits for you! (ShutterStock)
Food as Medicine

Turmeric with Black Pepper: What It’s Good for and How to Take It

Historians have gathered evidence showing that people—from long ago and from around the world—have used herbs, often in a sophisticated way. Quinine from Cinchona bark, for instance, was used to treat the symptoms of malaria long before the disease had even been identified, and the raw ingredients of a common aspirin tablet have been a popular painkiller for far longer than we have had access to tablet-making machinery. In fact, many pharmacological classes of drugs today include a natural product prototype that we had originally discovered through the study of traditional cures and folk knowledge of indigenous peoples.

A plant in South Asia called adhatoda—from adu meaning “goat” and thoda meaning “not touch” because it’s so bitter even goats won’t eat it—has compounds that help open our airways. Adhatoda tea, with its leaves steeped with black peppercorns, has been used traditionally to treat asthma. I can see why tea would be made from that plant, but why incorporate black peppercorns? In 1928, scientists discovered what the South Asians evidently had already known: Adding pepper increases the anti-asthmatic properties of the adhatoda plant’s leaves.

Why Black Pepper with Turmeric?

The Indian spice turmeric, which gives curry powder its characteristic golden color, is so beneficial that my Daily Dozen recommends we get at least a quarter teaspoon every day. Why should we pair it with black pepper?

Approximately 5 percent of the spice turmeric is composed of an active compound called curcumin, which is responsible for turmeric’s bright yellow color.

About 5 percent of black pepper by weight is comprised of piperine, a compound that gives the spice its pungent flavor. Piperine is a potent inhibitor of drug metabolism. One of the ways our liver gets rid of foreign substances is by making them water soluble so they can be more easily excreted. But, this black pepper molecule inhibits that process.

How Do Turmeric and Black Pepper Work Together?

Within an hour of consuming turmeric, we get a little bump in the level of curcumin in our bloodstream. We don’t see a large increase because our liver is actively trying to get rid of it. Would taking just a quarter teaspoon’s worth of black pepper suppress that process? Indeed. By adding just a little black pepper, the bioavailability of curcumin shoots up by 2,000 percent, as I discuss in more detail in my video Boosting the Bioavailability of Curcumin. Even just a little pinch of pepper—1/20th of a teaspoon—can significantly boost curcumin levels. And guess what a common ingredient in curry powder is besides turmeric? Black pepper.

Other Ways to Boost Turmeric’s Benefits

When we consume curcumin in its whole food form of turmeric root, whether fresh or dried as a powder, absorption of the pigment is also boosted. Natural oils found in turmeric root and turmeric powder can enhance the bioavailability of curcumin seven- to eight-fold. What’s more, when eaten with fat, curcumin can be absorbed directly into the bloodstream through the lymphatic system, thereby in part bypassing the liver.

In India, this is exactly how turmeric is commonly used culinarily—with fat and black pepper. Amazing! Unfortunately, their traditional knowledge certainly failed them with ghee, which is practically pure butter fat. That may explain India’s relatively high rates of heart disease despite all the turmeric in their diet.

What Is Turmeric Good For?

What makes turmeric so healthful that it has a spot on my Daily Dozen?

What Are the Side Effects of Turmeric?

I love cooking with turmeric and recommend including it into our daily routine that way rather than taking curcumin supplements, especially during pregnancy.

It takes about 40 milligrams to get a 50 percent gallbladder contraction, which keeps bile from stagnating. If you have a stone blocking your bile duct and eat something that causes your gallbladder to squeeze down hard, you may be seeing stars from the pain! Patients with biliary tract obstruction should be careful about consuming curcumin, but, for everyone else, these results suggest that curcumin can effectively induce the gallbladder to empty and thereby reduce the risk of gallstone formation in the first place and, ultimately, perhaps even gallbladder cancer.

Too much turmeric may increase the risk of kidney stones. The spice is high in soluble oxalates, which can bind to calcium and form insoluble calcium oxalate, which is responsible for approximately three-quarters of all kidney stones. Those with a tendency to form kidney stones should restrict turmeric intake to one teaspoon per day.

How Much Turmeric and Black Pepper Should You Take Daily?

With few downsides at culinary doses and myriad potential health benefits, I’d suggest trying to find ways to incorporate turmeric into your daily diet. I recommend consuming at least a quarter teaspoon of turmeric every day as part of my Daily Dozen checklist, and flavor your dishes with black pepper for added kick and added healthful benefits.

How to Take Turmeric with Black Pepper

Simply add these spices to your favorite soups and stews. They can also be blended with bananas and cashews to make a golden turmeric smoothie. Here are two of my favorite recipes that feature both turmeric and black pepper:

I’ve previously covered the topic of food synergy in videos such as Apples and Oranges: Dietary Diversity and Garden Variety Anti-Inflammation, emphasizing the importance of eating different plant foods to take advantage of some of these interactions.

The black pepper mechanism reminds me of stories about grapefruit (Tell Your Doctor If You Eat Grapefruit) and broccoli (The Best Detox). A testament to the power of plants!

I briefly mentioned the painkilling properties of aspirin. Did you know they’re found naturally throughout the plant kingdom? See Aspirin Levels in Plant Foods.

In some circumstances, the wisdom of traditional medicine seems incredible, as I discuss in Tomato Effect. It can also be dangerous, as you can see in Get the Lead Out. Thank goodness for science!

For all of our videos on the latest research on turmeric, visit our Turmeric topic page.

Michael Greger, M.D. FACLM, is a physician, New York Times bestselling author, and internationally recognized professional speaker on a number of important public health issues. Dr. Greger has lectured at the Conference on World Affairs, the National Institutes of Health, and the International Bird Flu Summit, testified before Congress, appeared on The Dr. Oz Show and The Colbert Report, and was invited as an expert witness in defense of Oprah Winfrey at the infamous “meat defamation” trial.