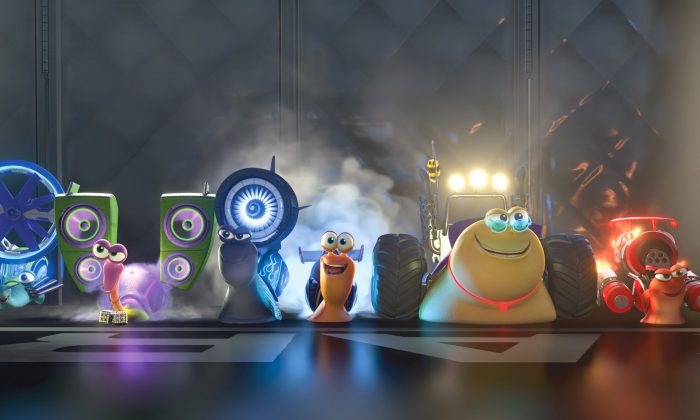 ‘Turbo:’ A Snail of a Tale That Hits the Mark

Giant robots, monsters, and oceans of digital wizardry can’t hold a candle to the simple story of a cartoon snail. You’ll yawn at this summer’s realistic robots, but you’ll be thoroughly engrossed in the tale of this tiny toon called Turbo, even if you’re not 6 years old. Good storytelling always rules.

Theo the snail (Ryan Reynolds) is on a Hero’s Journey. He heeds the call to adventure and leaves the village compound. Oh, he wants to be a racecar driver! Yes, he, the tiny garden snail, like in Sheryl Crow’s song from that other cartoon movie about racing, “Cars,” wants to “get real gone.”

The problem is that Theo has a top speed of about 0.8 inches per minute. He dreams of going 200 miles per hour. Isn’t that sad? Up until this telling, he’s lived his life with a badly wounded heart. Life is just unfair like that, and that, dear parents, is an awesome lesson for the kiddies.

However, deep down, he knows that he’s a member of the speedster tribe, while his brother Chet (Paul Giamatti) is content to work in the village compound at “The Plant.” (It’s a tomato plant.) Chet is the classic crab, constantly pulling his bliss-seeking brother back into the crab bucket. Yes, they’re snails, not crabs. But snails and crabs both have shells. Never mind.

Theo breaks free of the tomato plant and suburban lawn, and goes on a dangerous journey. Snatched by marauding crows, he falls off a thruway overpass, lands on a speeding windshield, and ultimately, like with Jonah and the whale, he enters the belly of the beast. He’s sucked down the blower of a teenage drag racer’s nitro-burning Camaro!

Instant death? Not so fast, folks. In the movie’s most fascinating sequence, the “camera” dives in, magnifying the goings-on in the microcosm of Theo’s transformation.

The blue nitrous oxide, like some kind of magical high-energy matter from another dimension, invades the mini-universes of Theo’s subatomic particles, and BOOM! He’s suddenly got a supernormal ability—blazing speed.

Oh, wait. There are also more minor supernormal abilities: His eyes light up like car headlights, and he’s got a built-in alarm, ignition remote, and a radio. Theo just got real gone. Meet “Turbo”!

Michael Peña is the voice of Tito Lopez, co-owner of a Mexican restaurant in a little California backwater reminiscent of the bypassed cultural atoll in Radiator Springs, in “Cars.” It just so happens that Tito has a little side action going. He races snails. Tito discovers Turbo’s talent, envisions dollar signs, and enters Turbo in the Indianapolis 500!

Now, that phosphorescent blue streak Turbo leaves when he speeds around looks suspiciously like “juicing” (steroids). But, while steroids are real, science says that supernormal abilities are also real, albeit far less well-known. No matter, that’s not the point here.

The point is for kids to hear the time-honored formula of the classic Hero’s Journey, about how one is required to endure hardship and danger in order to be able to live one’s bliss. Also, there is that other linchpin of the hero formula—cooperation with others.

Creativity rocks this wee film. The opening speedway shots give you the perspective we wish we could see on TV of Indy races: just how smokin’ fast those vehicles move, and the high-decibel din.

Like so many of the digital 3-D cartoon movies, one thing that this one tends to get right is our collectively idealized, cozy inner imagery of suburban Americana. Lawnmowers, the smell of cut grass, garden hoses, sprinklers, full moons, America’s wondrous starry landscapes, and our nostalgia for the cheesy-magical atmosphere that hovers around traveling carnivals and South of the Border.

It’s easy to forget that Reynolds, now cast primarily for his good looks, came to fame in “Van Wilder.” He’s an exceptionally funny actor. As the voice of Theo, making a crow-avoiding getaway under cover of a rancid discarded Chinese-food carton, he philosophizes, “It’s like wearing a hat made of feet.”

Turbo’s pit crew is staffed by fellow speed-infatuated snails that sport hilariously ingenious low-tech versions of his supernormal abilities. They’re voiced by, among others, Snoop Lion (aka Snoop Dogg), Maya Rudolph, and Samuel L. Jackson. It’s sort of a Greek chorus that’s dangerously close to a minstrel show, but really—who else but Sam Jackson would you want to have voice a line like, “Don’t test me, crow!”

Especially well conveyed is the joy of attaining one’s bliss. The snail’s-eye view of finally being able to burn up the track at 200+ mph is thrilling to the point of making you check your adult self: “Why am I choking up in a child’s cartoon about a oxymoronic fast snail?”

Well, because the unlocking of one’s bliss is not child’s play—it’s for all ages. Very magical!