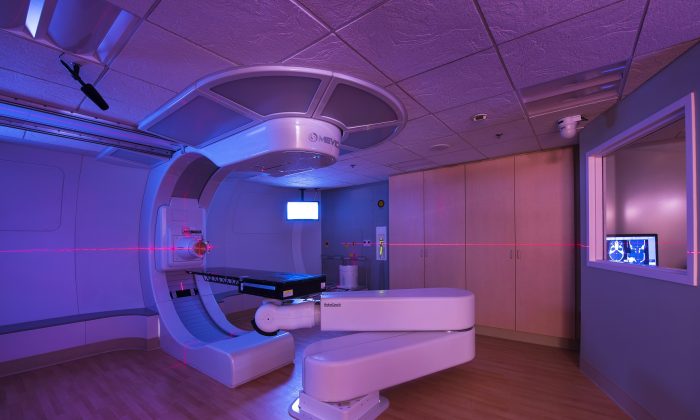 She thought it might be some side effect related to her pregnancy, but on Feb. 9, 2016, her ophthalmologist discovered a brain tumor located behind her right eye. It was benign, but growing fast, as it fed on hormones that increase during pregnancy.

Birusingh was induced at 34 weeks. Giving birth effectively stopped the mass from increasing, but the challenge was knocking out the tumor for good.

Because of the tumor’s location, surgery wasn’t an option, and conventional radiation presented some serious risks.

Birusingh’s tumor was not only close to her delicate optic nerve, but also to her hippocampus and hypothalamus. This means that any conventional treatment aimed at the tumor site would likely impact these critical brain structures, potentially leading to a loss of eyesight and short-term memory, and impairing her hormonal function.

“I’m 36 years old. I need my hormones,” Birusingh said. “My husband needs me to have my hormones regular. He does not want to have a wife who is pre-menstrual all the time. That would have been hell for him.”

“We could have treated her type of tumor successfully using intensity-modulated radiotherapy (IMRT). It would have been an acceptable treatment. It’s the standard of care around the world,” Ramakrishna said. “But what is remarkable about protons is that we are able to go a step beyond that in terms of her long-term outcome.”

Ramakrishna said that a lot of the toxic effects of conventional radiation aren’t seen for decades. It can be as many as 40 years before they reveal themselves.

“Those are the effects especially that we were able to mitigate using protons,” he said. “There is no doubt in my mind that the physical dose distribution we can achieve with protons is going to be reflected in a better long-term quality of life.”

Since the discovery of X-rays in the late 1800s, doctors have been using radiation to treat cancer. The treatment is effective but toxic, so using it appropriately requires a balancing act to ensure that it does more good than harm. Although advances in technology allow conventional radiation therapy to be applied more accurately than ever, it nevertheless affects healthy tissue beyond the tumor.

Proton therapy is also a type of radiation therapy, but it uses positively charged particles instead of X-rays. Using a syncocyclotron (basically, a miniature super collider), protons are sped up to about six-tenths the speed of light and aimed at the target disease. Like X-rays, these high-speed protons also destroy cancer cells, but they can do so with much more precision.

“Protons deliver some energy on their way toward the tumor target, but they are able to release it in a large burst into the tumor in a characteristic known as the Bragg Peak,” Ramakrishna said. “Beyond the tumor there is really no radiation because the protons have released all their energy at that point, and there are no further protons.”

This controlled-burst characteristic makes protons the preferred therapy for tricky tumors like Birusingh’s, as well as for pediatric cancers where X-ray radiation would otherwise damage developing tissue.

Proton therapy was conceived of in the 1950s, but until 2000, only two facilities in the nation were offering treatment. However, recent technological advances have made the treatment more widely available. Today, 23 facilities across the country offer proton therapy, and 13 more facilities are currently under construction.

“What used to cost $250 million and require a big team of physicists has been compacted down to a more manageable size and more of a turnkey type of solution,” Ramakrishna said. “Although it’s still quite complex.”

Birusingh’s diagnosis conveniently coincided with the completion of a new proton therapy facility in Orlando. She was the first patient to receive treatment using the three-story, 200,000-pound proton accelerator.

“I was patient zero. I was the first to put my butt down on a $25 million machine,” she said.

Precision is the whole point of proton therapy, so Birusingh had to be fitted for a customized head piece before receiving treatment. This mask allowed her to lie still but comfortably, so the proton beam could hit the exact target for each visit. Birusingh said it was a pleasant experience.

“They play really great music, and the machine is not loud at all. The MRI machine is a lot louder than this,” she said.

Over the course of six weeks, Birusingh was given a total of 29 sessions with the proton beam. Each lasted about 15 minutes. May 16 was her last day, and she reported minimal side effects. By the end of the treatments, some of her hair was falling out, but she otherwise felt good.

“They told me I could feel fatigued, but I’m 10 weeks postpartum,” she said. “I think feeding my son every one and a half to two hours is making me feel more fatigued. I really can’t blame the protons.”

Birusingh’s tumor is called a mengioma—basically a tangle of connective tissue bound together by tumor cells. Although her millimeter-size mass will take years to shrink, Ramakrishna says she is in the clear.

“Mengioma is a tumor that shrinks extremely slowly over time from the standpoint of an MRI. What happens sooner is that neurological function improves because internally the nerves are being decompressed, but externally the size of the tumor increases on average by about 25 percent over a period of one or two years.

“It’s a tumor that’s a mixture of connective tissue[s], which don’t actually shrink. The part that shrinks is actually the tumor cells, which comprise a relatively small amount of the volume,” he said.

Although proton therapy is primarily used on tumors in the brain, spine, and pediatric cancer, the treatment has the potential to treat a variety of cancers in sensitive locations.

Researchers are looking at the treatment in lung cancer patients where conventional radiation could worsen underlying pulmonary disease, and in breast cancer on the left side of the body where X-ray treatment could impact the heart.

“I believe pancreatic cancer will be quite amenable to protons, and we’re looking to start another trial that would treat that site,” Ramakrishna said. “For prostate cancer, the use of protons is controversial but widely used. We get outstanding dose distribution.”

The controversial part of proton therapy is cost. Even though new technology has lowered the price a great deal, treatments can still run between two and four times as much as conventional radiation.

“The technological advances that have allowed this to reach so many hospitals [have] been very impressive. The use of the superconducting technology in these syncocyclotrons is really some of the highest-end technology that’s available on the planet, but there is a lot of public debate about whether the measured benefit is significant because the treatment is much more expensive,” Ramakrishna said.

“There is no doubt about that issue when you talk about the brain and the spine, or pediatric, but when you get to the common cancers, you get much more scrutiny about the cost-benefit ratio of any particular treatment.”

Although Birusingh was considered a prime candidate for proton therapy, she said her insurance still took a long time to grant approval. But she is convinced the decision was worth it.

“As a patient and a physician, I’m really impressed by this technology,” she said. “I really want people to know that proton therapy exists and all the benefits of it.”