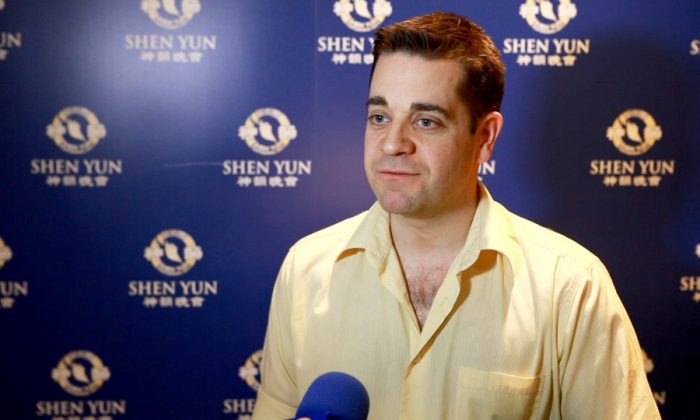 VANCOUVER, Canada—Owning a toy store is every kid’s dream, but only a few adults make that dream a reality. This is the case for Matthew Purdy the owner of Toy Traders, Canada’s largest independent toy store.

A regular attendee at performances held at Vancouver’s Queen Elizabeth Theatre, Mr. Purdy didn’t know what to expect when he purchased tickets to the Shen Yun Performing Arts matinee show on Jan. 24.

It was visually amazing.
— Matthew Purdy

“I had no idea going in if I would enjoy it, and I loved it,” he said. “I was very surprised. It was visually amazing.”

Shen Yun seeks to revive China’s rich heritage by presenting 5,000 years of culture onstage. Many audience members are surprised to find out that authentic Chinese culture is being presented by a group based out of New York.

“I assumed that this whole group came from China and that this is where they are from and they come here. And so I find out that it’s based out of New York and the reasons why it’s based out of New York. It was very interesting,” said Mr. Purdy, referring to the fact that Shen Yun has been unable to perform inside of China due to the ruling communist regime’s suppression of traditional culture.

Being based outside of China has allowed Shen Yun the artistic freedom to present the country’s complete culture without restriction.

Shen Yun strives to educate as well as entertain, and the performance includes tales from present-day China to enlighten audience members to the oppression taking place within China today.

One such group that currently faces persecution is Falun Dafa, a meditation and cultivation practice that espouses the values and spiritual ideals of China’s ancient past. One of Shen Yun’s pieces, “Trial by Fire,” tells the story of a young family of Falun Dafa practitioners who are torn apart by persecution at the hands of Chinese police.

“I had no idea how bad it was over there,” said Mr. Purdy reflecting on the fact that China’s information blockade has prevented people outside China from learning the truth about the persecution.

“I feel so bad for so many Chinese people, because their heritage has been so destroyed, and they have to leave their country to really discuss what’s going on.”

“I was glad just to be a part of [the show],” he added. “I’ll tell everybody I know, not only about [the Falun Dafa persecution in China], but about the show too. It’s great.”

Energy of the Dance

Shen Yun’s hallmark is classical Chinese dance, an art form that has been continually evolving for 5,000 years. It is deemed to be one of the most comprehensive dance systems in the world and a direct historical record of China’s history.

“For Chinese people to express their culture, express their dance, I was really impressed just with how much of that was incorporated,” Mr. Purdy said.

“I had no idea [that], for instance, even something as basic as a lot of the gymnastics moves, flips, and such originated from China thousands of years ago, long before the Olympics,” he said.

Mr. Purdy was also surprised by the energy and vigour of the performance.

“I figured it would be more of a slower movement. But you don’t really realize until you watch the show live just how fast-paced it is. And the timing was amazing. Everyone was working as a team, just so smooth.”

“I get a real sense of unity,” Mr. Purdy added, referring to his overall impression of the show.

“I really felt that there was a real sense of unity—from the performers and from the culture.”