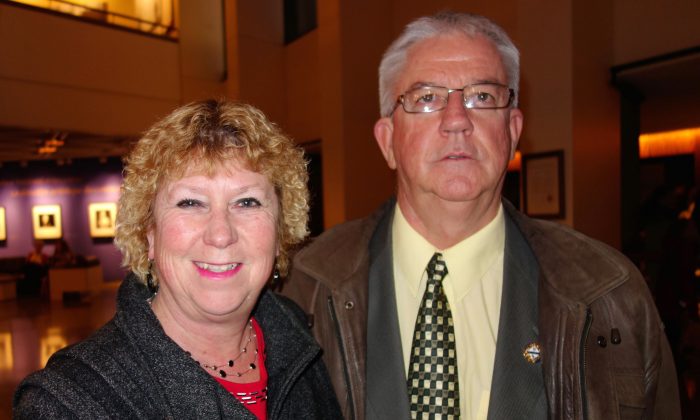 Robert McLaren, who sits on Deep River’s town council, braved some of the worst road conditions Canada can put up so that he and his wife Carolyn could see Shen Yun at the National Arts Centre on Jan. 4, 2015. (NTD Television)
Company

OTTAWA, Canada—Robert McLaren, who sits on Deep River’s town council, braved some of the worst road conditions Canada can put up to come to Shen Yun Performing Arts in Ottawa on Sunday.

He and his wife Carolyn McLaren came for the last of four shows put on by the classical Chinese dance performing arts company the morning after freezing rain turned Ottawa roads and sidewalks into sheets of ice.

“It was a four-hour drive which normally is a two hour drive,” said Mr. McLaren.

“The roads were so bad. It was a treacherous drive,” added Mrs. McLaren.

But however terrible the roads, Shen Yun did not disappoint. The couple will spend the night in Ottawa as part of the excursion.

“The show itself was beautiful,” said Mr. McLaren.

McLaren, Deep River’s former public works director, ran for council this year on a platform of building a retirement home for the town’s elder residents.

The couple shared their enthusiasm for the performance that afternoon at the National Arts Centre.

“Yes, it was excellent, it was everything we expected it to be,” she said.

Shen Yun will continue with the Canadian portion of its world tour with shows at the Place des Arts in Montreal from January 7-11.