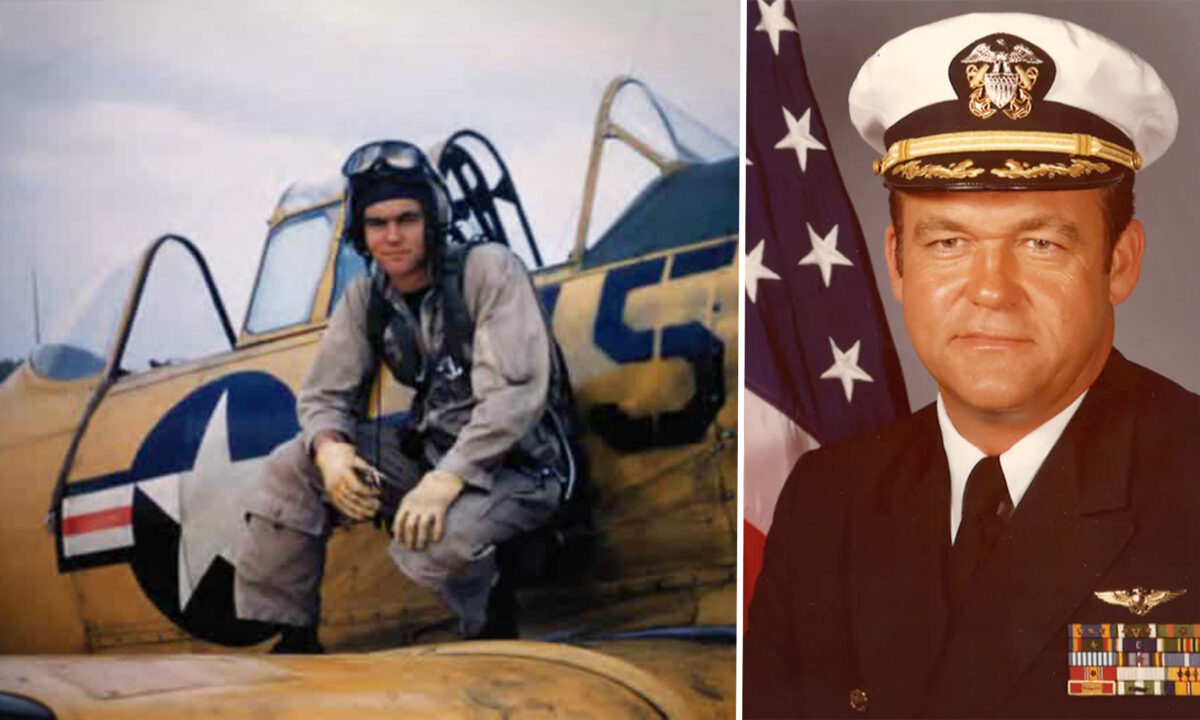 There’s no doubt fans of “Top Gun” were thrilled with Maverick’s silver screen comeback. But the real-life story behind that elite fighter pilot school is mind-blowing in equal measure.

The Navy’s Advanced Fighter Weapons School (or Top Gun) was spearheaded in dire times during the Vietnam War by Dan Pedersen, 86, the “Godfather of Top Gun.” It started from nothing—no classroom, no funding, no mechanics or aircraft of their own—just a few top-notch pilots he hand-picked, and a tight deadline.

Their mission? To reclaim air superiority from the Soviet-trained North Vietnamese, who knew how to tangle in the skies.

Pedersen’s book “Top Gun: an American Story” sets out that riveting backstory. The Hollywood blockbuster, he told The Epoch Times, is “great public entertainment” but “very unrealistic about Top Gun, how it existed years ago, and as it is today.”

As Maverick and Goose were tasked with taking on Russian MiGs over the Atlantic in 1986, Pedersen faced a grave situation in Vietnam: American fighter pilots were being shot down—killed—at a staggering rate.

One American was lost for every two enemy. The North Vietnamese were adept at pushing the limits of their vastly outdated Russian MiGs in air-to-air combat—what fighter pilots call “dogfighting.”

The Americans were basically training aviators to use equipment, sending them into battle, then expecting to see victories. “We lost 11 guys in 17 days,” Pedersen said of his stint on the USS Enterprise. They would go to dinner and see empty chairs at the table.

Mentored by WWII ace Eugene Valencia, Pedersen, then 31, was called to turn the tide. He picked eight elite fighter pilots—all in their twenties—including his righthand man, Mel Holmes, and set about literally rewriting the book on air combat at the Naval Air Station in Miramar, California. It was experimental, serious, and dangerous.

“We were given 60 days,” he said. “This was a graduate school. … This had to be something we knew would win.

“When Top Gun was formed, in the beginning, all of us had made two combat cruises on carriers to Vietnam. It was very serious what we were doing.”

Nobody was going to furnish them new planes with greater capabilities; they relied on what they had: the F-4 Phantom, a “great airplane” with “two very reliable high powered engines,” said Pedersen. “I’ve flown that plane 2.47 mach. … At that point, the airplane would come apart due to heating.”

Pushing the F-4 to the very threshold, they outlined new tactics.

“We all had opinions because we had been out on different carriers for at least twice. And one of the guys had been shot down twice,” he said. “We were motivated, man.” They flew the airplane the way they envisioned their new tactics to prove what worked.

Knowing MiGs, he also knew how to beat them. One new maneuver involved rocketing straight up, vertically, in full afterburner right to zero airspeed. This would foil the enemy.

“There’s not a MiG pilot in the world that’s going to follow you through that aura,” said Pedersen. “It’ll go up to 40,000 feet like that. And there’s nothing in the MiG stable airplane that’s going to be able to do that.”

That fits into a comprehensive “flying in the egg” tactic, traversing a colossal, vertical circuit culminating in an apex upside-down at the “top of the egg,” the enemy fully visible below, then swooping down from behind for the kill.

“If you can’t get a good shot, you pull off,” Pedersen explained. “If you missed, you went right straight vertical again, right straight up and upside-down on the top of the egg.

“While you’re down there shooting, the other guy, your wingman, is up on top keeping track of the fight watching out for others.”

You could wind up tangling with two, three, or even six enemy planes in one raucous, hairy dogfight.

Within weeks, they were ready to rejoin the war. A tight nucleus of new, cutting-edge know-how was dispersed throughout the United States military, and by the war’s end, that kill ratio of 2 to 1 became 24 to 1.

What made this comeback successful was the pilots’ “pushing the envelope,” exceeding safety limits set by the manufacturer; the F-4 could do way more than first thought.

“The safety factor that was built into that airplane was fairly large,” said Pedersen. “The airplane was capable of a whole lot more than we had been flying it the first five years of that war.”

So, what did top brass think of their shattering safety protocols?

“Success speaks for itself,” said Pedersen. “When you win to that degree and you go to 24-to-1 kill ratio, nobody would take us on.

“We actually won the air war in Vietnam, who’s going to argue with you?

“Nobody in Washington is going to make an argument.”

Has all this new sophistication changed the rules for dogfighting?

A man of simplicity, Pedersen says no.

“It only takes one bullet to bring you down, even today,” he said. “Give me a gun and some heatseeking sidewinder missiles, and I’ll take on anybody in China or Russia right now.”

A decade after founding Top Gun, in 1980, he became captain of aircraft carrier USS Ranger, in command of 5,000 sailors with an average age of 19.5 years. Numerical superiority in easily serviceable jets, Pedersen says, far outstrips the technological superiority of ultra-expensive weapons that are hard to maintain.

“Sometimes, a $300 million airplane isn’t the answer,” he said. “I personally like to have 8 or 10 lightweight fighters that are maintainable, you got to be in the 98 percent reliability.

“The ‘magic missiles’ [of today] … somebody’s making a lot of profit off this stuff,” he said. “I tend to believe in simplicity. Having flown the MiGs, which were an older generation, the guns work 98 percent of the time.”

The legacy of Top Gun today is as important as it was in Vietnam. They continue to train the top 1 percent of fighter pilots, who pass their knowledge on to their squadrons—with a great deal of confidence. Their results speak for themselves.

“We rewrote tactical aviation worldwide, it still is the standard,” said Pedersen, who now gives credit where credit is due—they were all young mavericks, as Top Gun still is today. “Not just me, but my eight guys and some senior people who made me bulletproof—that’s a pretty risky trying to do, something like this in 60 days.

“So when we pulled it off, and the kill ratio is 24 to 1, I wanted to make sure the story is told accurately.”