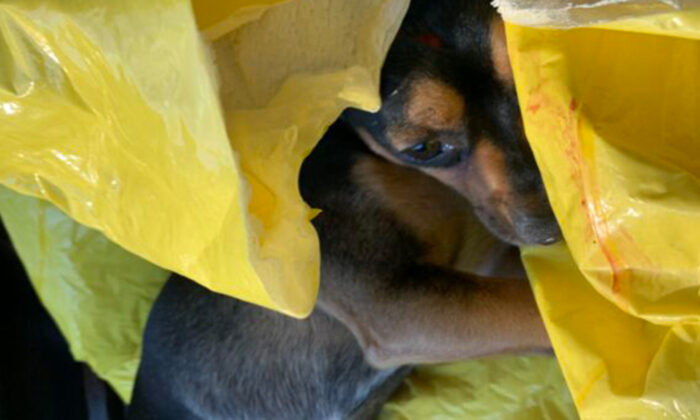 It was a terrible sight to witness for anyone, but especially for an animal lover like Officer Joseph Puglia of the Pinellas Park Police Department: a dog that had somehow got loose on Interstate 275, one of the busiest highways in the Tampa Bay area, and was struck by a truck.

“I saw his body slide across the road and he wasn’t moving,” Puglia told The Epoch Times. “My heart sank because I thought he was dead.”

What happened next was a courageous act that was captured on Puglia’s patrol car dash camera. The officer stopped his car in the far left lane of the freeway then jumped out to rescue the dog. “It was dangerous, but it was worth the risk to me,” he said.

He realized that the dog was still breathing. “I didn’t know to what extent he was injured or if he was going to make it, but I at least felt hope at that point,” he explained later. Calling police dispatch, Puglia told them the dog “was in a great deal of pain” and took him to the Pinellas Animal Hospital.

Thankfully, while the dog had sustained some injuries, he had not been paralyzed or suffered any lasting damage from the collision.

The dog had likely been abandoned as it had no collar, tag, or microchip. Puglia and staff at the hospital dubbed him Lucky in honor of his amazing rebound.

For this police officer, it was a great feeling to know that he had helped save Lucky’s life. “I visited Lucky in the hospital while he was recovering, and he was still in shock to be sure,” he told The Epoch Times. “I petted him and just spent some quiet time with him.”

After the story hit the internet, it quickly went viral, with Puglia receiving compliments and encouragement from animal lovers all over the internet. The officer, who is a Navy Veteran and has spent over 20 years on the force, was “a little puzzled by all the attention” but pleasantly surprised at the response.

While some people who read the story were surprised that a police officer would get involved with an injured dog, for Puglia, it’s all part of his job—keeping the community safe. “My agency has a history of helping and rescuing animals; it’s a point of pride for us,” he told The Epoch Times. “Many of the officers I work with have animal rescues under their belt and many were performed quite heroically.”

The police department often gets involved in lost-and-found pet cases. They also “routinely investigate animal abuse and neglect cases just as [they] would with crimes committed against people,” according to the officer.

The animal lover expounded that “all life is precious and important,” as he grew up with dogs, while he and his wife have adopted two rescue cats. “We treat them like our own kids.”

In addition to all the excitement and attention, in the end, Lucky found a good home. Despite being homeless, the dog did appear to be healthy. After all the news, Puglia figured that the dog’s owner might come forward to claim him. “It makes me wonder if he was discard [sic] intentionally,” he added.

Whatever the case may be, Lucky’s got it good now. He was adopted “without hesitation” by a Pinellas Park employee into “a wonderful home” and has all the love he deserves. It just so happened that Lucky’s new human companion had lost someone in her family, so the dog came at just the right time.