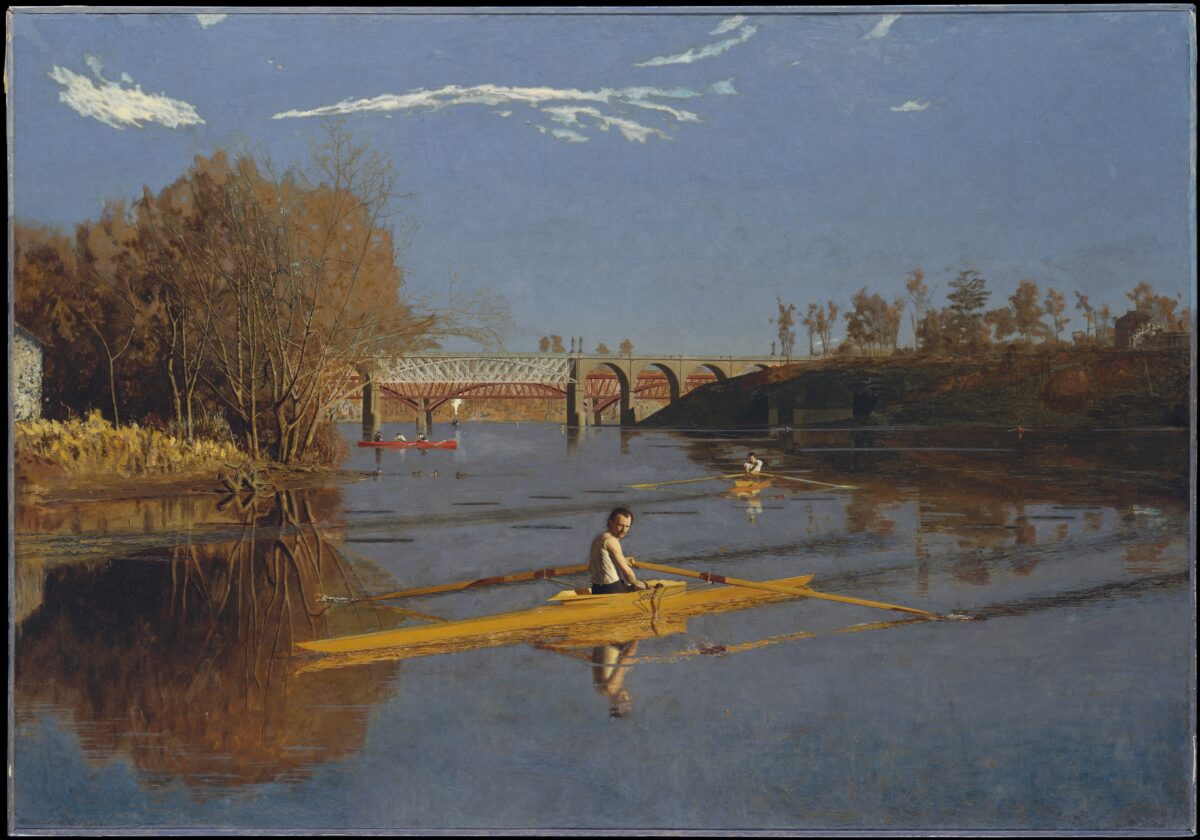 The Schuylkill Navy of Philadelphia (now the oldest amateur athletic body in America) represents rowing clubs in the city, and in this year, 1870, the finalists are all from the Pennsylvania Barge Club: Max Schmitt, Austin Street, James Lavens Jr., and Charles Brossman.

The 3-mile circuit they’re about to race starts (and ends) near Turtle Rock Lighthouse with the athletes sculling upstream, under two bridges before they turn near the Columbia Railroad Bridge for the return journey.

In his book “The Schuylkill Navy of Philadelphia, 1858–1937” Louis Heiland recalls the race. Starting well together, Schmitt soon takes the lead, followed by Street, Brossman, and Lavens.

Passing under the Girard Avenue Bridge, which is the first marker, Brossman and Street foul each other, the oars of one resting on the boat of the other. Schmitt is now three full lengths ahead. Street and Brossman foul again when Street tries to turn on the eastern stake, crossing Brossman’s bow. Schmitt maintains his lead and easily wins the race.

Rather than depicting the race, American artist Thomas Eakins (1844–1916) in his painting “The Champion Single Sculls (Max Schmitt in a Single Scull)” shows Schmitt just after he’s won it. Gliding at speed, Schmitt’s boat breaks the calm water, creating ripples that cut through the silent, sunny day. You can almost hear Schmitt’s racing heartbeat settling down as he catches his breath and looks out toward us in quiet reflection.

Eakins, a keen oarsman, can be seen sculling in the background. He painted his name on the boat to make sure we know it is him.

Overall, the painting is one of quietude, largely due to Eakins’s clever use of a series of parallels in the composition. Schmitt’s boat almost aligns with the bridge in the background, and both he and Eakins hold their oars in parallel, creating a harmonious effect. The tree-lined banks further frame the picture and bring our attention to Schmitt.

Eakins was one of the first American painters to train in Paris. And this painting is the first of many rowing scenes that Eakins created in the 1870s, after he’d just returned from Europe (Paris, then Madrid and Seville in Spain).

He spent around three years (from 1866) training in the Paris atelier of eminent history and genre painter Jean-Léon Gérôme at a time when photography was gaining popularity and impressionism was just emerging.

The rather murky trees in the background of his painting could be mistaken for having impressionistic qualities, much like a Claude Monet or Édouard Manet landscape painting. But Eakins did not go in this artistic direction.

Eakins stayed true to realism. By the time he went to Paris, he’d already attended the Pennsylvania Academy of Fine Arts and anatomy classes at Jefferson Medical College in the city. (Two of his masterworks are medical paintings: “The Agnew Clinic” and “The Gross Clinic.”)

He mastered photography only to study anatomy closer, as a tool for his art rather than a replacement. For instance, he pioneered the use of photographs and lantern slide projectors to enlarge compositions onto his canvas.

His rowing paintings show his anatomical knowledge well. In his oil painting: “John Biglin in a Single Scull,” he strongly rendered Biglin’s arm muscles, almost to the point of pulsating. Being a rower himself, he would’ve known the exertion needed for the sport and would have felt which muscles were engaged.

When Eakins sent Gérôme his watercolor painting, “John Biglin in a Single Scull,” his master was delighted. He wrote: “Your watercolor is entirely good and I am very pleased to have in New York a pupil such as you who does me honor.”

Eakins painted what he knew well: people, the human figure, and Philadelphia. He lived most of his life in that city, where he was born and raised.

He applied himself to perfecting his realist art. His wife, Susan, wrote in a letter that although Eakins delighted in works by Gérôme, Rembrandt, Diego Velázquez, and Jusepe de Ribera, he was more influenced by nature. She added: “He simply painted what he saw.”

Eakins’s friend, the poet and essayist Walt Whitman, admired how he “could resist the temptation to see what they ought to be rather than what is.” His late portrait paintings, in particular, show not only his deep understanding of anatomy but also the nuances of human nature.

It was a talent that made some of his subjects uncomfortable, as he painted so true to life that some feared their portrait might not be flattering. Even some of Eakins’s friends declined gifts of their portraits once they were painted.

Eakins’s dedication to his art is clear. He made mirroring nature his mission by constantly studying anatomy, and by having numerous sittings with the subjects of his portraits to get the inner and outer likenesses just right.

He honed those skills across photography, sculpture, and most of all, painting. He specialized in painting portraits and genre scenes, especially outdoor sports in Philadelphia, such as boating.

The former director of The Metropolitan Museum of Art, Philippe de Montebello said: “Although fame eluded Thomas Eakins in his lifetime, today he is recognized as one of America’s foremost painters as well as a master draftsman and watercolorist, an accomplished photographer, and a sculptor of note.”