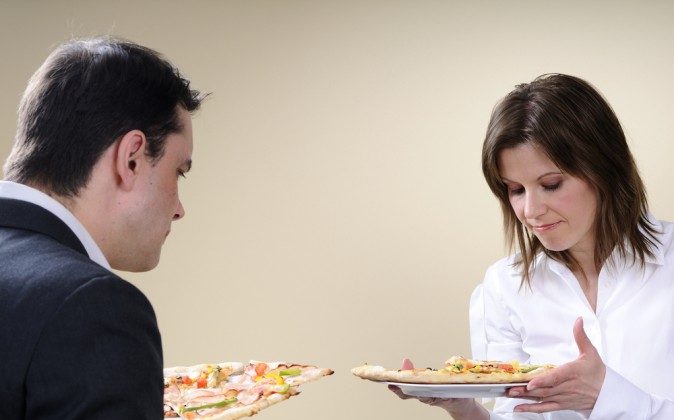 New research reinforces the idea that the brain can control eating behavior, and considering the long-term consequences of your food choices may help control food cravings. Two research studies showing the way you think about food can have an impact on appetite, and many others on the relationship between the brain and eating behavior, will be unveiled this week at The Obesity Society Annual Meeting at ObesityWeekSM 2014 in Boston, Mass.

Kathryn Demos, PhD, Assistant Professor of Psychiatry and Human Behavior at the Miriam Hospital at Brown University and her colleagues used functional MRI scans to watch participants brains as they reviewed pictures of enticing foods, like pizza, French fries and ice cream. Through the scans researchers were able to evaluate different strategies to reduce the desire to eat. They found that thinking about the long-term negative impact of eating these foods may be an effective way to reduce appetite.

“We found that simply thinking in a different way affects how the brain responds to tempting food cues in individuals with obesity,” said Dr. Demos. “Through the MRI scans we identified that thinking about the long-term negative impact of eating unhealthy foods increased activity in a region of the brain involved in inhibitory control and self-regulation. Our results show the promising possibility that focusing on the long-term consequences of consuming unhealthy foods could help diminish cravings and, as a result, potentially enhance weight-loss efforts.”

The strategy replicates a similar and successful smoking-cessation treatment method, which researchers remodeled for obesity treatment.

“Today, this particular strategy is not currently employed in standard behavioral weight-loss treatments, yet in future studies we will examine whether incorporating this strategy into weight loss treatments may be a viable new approach for clinicians to employ,” continued Dr. Demos, who will present her research today during an oral presentation at 3:30pm ET.

The study was conducted in 25 individuals with overweight or obesity. Participants were asked to use four cognitive strategies in random order:

1) DISTRACT – thinking about something other than enticing food;

2) ALLOW – accepting one’s thoughts and recognizing they are just thoughts that need not be acted upon;

3) LATER – focusing on negative long-term consequences of eating the food; and

4) NOW – focusing on immediate reward of the food.

Participants underwent functional MRI scanning and rated their urge to eat on a 4-point scale. The results showed that the LATER condition reduced the urge to eat the most. The LATER condition also increased brain activity the most in areas that as associated with inhibition of overeating.

“We know that behavioral therapy is effective in helping people lose weight, but this study shows us a potentially promising new strategy to employ when working with patients,” said Chris Ochner, PhD, Assistant Professor of Pediatrics and Psychiatry at the Icahn School of Medicine at Mount Sinai, and incoming co-chair of TOS Public Affairs Committee. “There’s a lot we can learn from studying the brain and human behavior, especially eating behavior, and we hope to see more research in this area so we can provide better treatment to people with obesity and overweight.”

A second study presented this week adds evidence to the current thinking that individuals with obesity can successfully reduce cravings using distraction tasks. For this study, Richard Weil, M.Ed. CDE, of Director of the Weight Loss Program at Mt Sinai St. Luke’s Hospital in New York City, and his colleagues tested the effects of three, 30-second distraction techniques to reduce cravings for the study participant’s favorite foods. They found that the effect of tapping one’s own forehead and ear with their index finger, tapping one’s toe on the floor, or a control task of staring at a blank wall, all worked significantly to reduce the cravings; however, forehead tapping worked best out of all techniques.

“The novelty of our study is that the subjects had severe obesity. The average BMI for the study participants was 43.7, or almost 83 pounds above what is considered the high end of the overweight category,” said Weil. “We showed that even with a high BMI, distraction techniques, and even the control technique, helped reduce the intensity of participants’ food cravings and the vividness of the image of their favorite foods. This reinforces the idea that it’s possible to distract ourselves from craving even our favorite foods no matter how much we weight, and this could be used as a weight-loss strategy.”

*Image of “evaluation” via Shutterstock