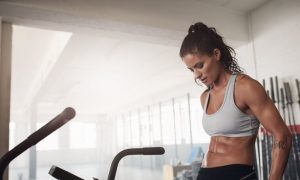 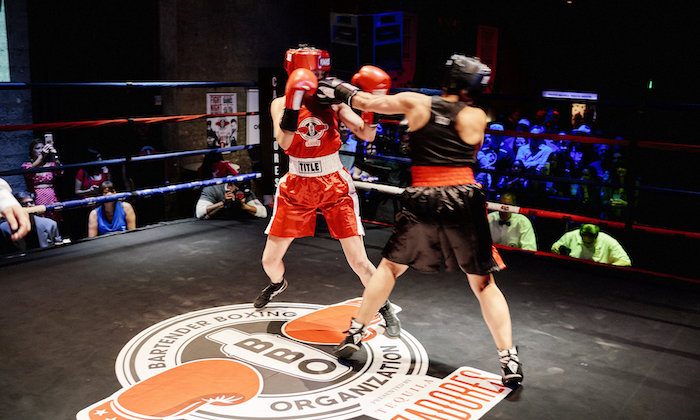 Boxing, much like bartending, is an oft-misunderstood profession. (Mark Tomaras Photography)
Drinks

They Can Make a Punch, But Can They Take One?

New year, new you: ’Tis the season to commit to drinking less, exercising more, dieting sensibly, and getting a better night’s sleep. Granted, all that’s easier said than done for even the most routine-oriented among us. For those in the hospitality and especially the bar industry, operating on erratic nocturnal schedules and surrounded by alcohol as the primary tool of their trade, the obstacles to self-care are even more daunting.

In fact, holistic wellness has become a pressing issue for the industry, as numerous recent articles in beverage publications such as Punch and Imbibe attest. And while proposed solutions vary, one of the most interesting I’ve found is centered on a sport that’s as widely misunderstood as the profession of bartending often is: boxing.

If most laypeople associate the one endeavor with brutality and the other with debauchery, they overlook just how important quick-wittedness, fleet-footedness, endurance, and no small amount of grace are to success in both.

Founded in 2017 and launched in 2018 by Raj Nagra, a bar industry vet and certified boxing coach, the Bartender Boxing Organization (BBO) inducts a select group of participants from cities around the country into a three-month training program, complete with a nutritional plan. Upon its completion, they’re in fighting shape to compete in legally sanctioned local bouts of three two-minute rounds, whose champs go on to face the winners in other cities; the ultimate victors are treated to a three-day trip to Mexico to visit the facilities of sponsor Tequila Cazadores.

But even the “losers” win the real prize: a template for professional longevity. “As bartending has become more of a career than a job, there is a greater awareness of its taxing nature,” says Cazadores senior brand manager Peter Macfarlane. Burnout is common without “support for the long-term health and well-being of the hospitality community.”

In 2019, 96 bartenders in eight cities are expected to compete in the program. I spoke to three recent participants who had as much to say about the psychological insights they gained as the physical fitness they attained along the way.

Gina Sciore, a bar manager at Hotel Vegas in Austin, applied to the BBO mainly because a friend asked her to. When her friend had to drop out for work-related reasons, she stuck with it primarily because, as she explained, “It was a motivation not to stay out late; in a way, it kept me out of trouble.”

Which isn’t to say it was easy. “As somebody who usually goes to bed around 4 a.m., waking up at 11—and not just getting up early, but getting screamed at and punched in the face—was a commitment.”

Living up to that commitment requires a positive attitude, according to Alex Jump, bar manager at Death & Co in Denver. “You’re like, ‘I’m very tired, it’s snowing, and I don’t want to get out of bed. I can anticipate the workout and it’s going to be hard.’ But once you overcome that mental burden and stop setting yourself up with negative expectations, you get into the routine and go into it every day with fresh ideas.”

Andrew Freeman, a bartender at Austin’s Container Bar, also found the attitude shift refreshing. Before entering the program, he admitted, “I thought boxing was two dudes savagely beating each other. I didn’t really grasp how intensive the training was going to be.”

But as he began the sessions of skipping rope, bag and footwork, shadowboxing, and finally sparring, he discovered that the sport is “really similar to fencing or ballet. It’s very precise, very rooted in finesse.” Over the course of three months, “My reflexes definitely approved; my response time went up. I was getting compliments from my friends and family. That definitely put gas on the fire.”

Of course, training is one thing, stepping into the ring for your first public fight another. Jump compared the anxiety she felt to that of entering a cocktail competition: “You can practice all you want, but when you get in front of a crowd of people, it’s so different. I still get butterflies thinking about it.”

In fact, confessed Scione, who fought a second bout after winning her first, “It was terrifying. The first time, I wasn’t even thinking—it seemed sort of out-of-body.”

Freeman empathized. “It’s harder to handle the adrenaline than it is to handle the pain,” thanks to the padding worn by amateur fighters. The trick is “trying to control your breathing and keeping your wits around you. That’s a hard thing to master.”

Indeed, learning to be present in her body was paramount for Jump, taught by her trainer that a strong right cross punch like hers “comes from power from your hips.” In our body-shaming culture, she said, it was validating “to take the wide hips my mom blessed me with and find the beauty in them, in the things that you’re often told aren’t perfect.”

Whatever your resolutions for 2019, may they likewise reveal that the new you was in the old you all along.

Ruth Tobias is a longtime food and beverage writer based in Denver, Colorado. To learn more about her and her work, visit RuthTobias.com or follow her @denveater on Twitter and Instagram