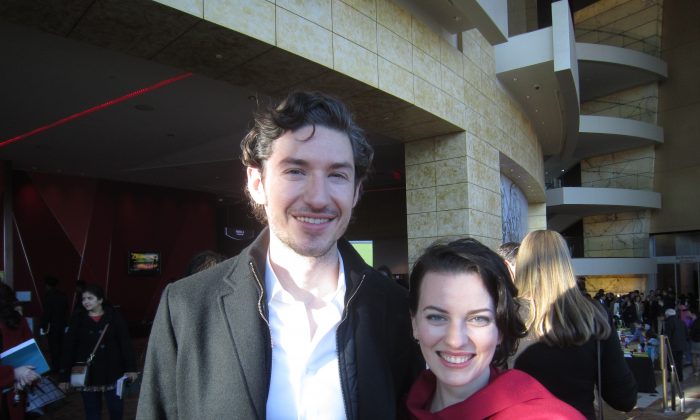 Mr. Stein has appeared in independent films, is an “actor in training,” and has done Indian Bhangra-style dancing, in college. He appreciated the quality and the visual display of the dancers. Each dancer performed as a unique entity but also as part of the complete picture presented onstage.

“When a dancer is so in sync, all that you see is one unified organism, one flow rather than just a separate this dancer, that dancer. I loved it. I think it was a very lovely display,” he said.

“I was wowed by how tight the choreography was and how in sync everyone was there. You never really were drawn to one dancer so much as the whole movement together, and the colors, and the arching of the scarves.”

Ms. Dougherty, a financial advisor, said the dancers showed “the collective whole, as opposed to an individual.”

Classical Chinese dance is at the heart of what Shen Yun does, but it also includes folk and ethnic dance, a state-of-the-art digital backdrop, and a blended orchestra of Eastern and Western instruments that together bring millennia of Chinese culture and history to the stage.

“Digging deeper, one discovers a sea of traditional Chinese culture. Mortals and divine beings merge on stage as one. Principles such as benevolence and justice, propriety and wisdom, respect for the heavens, and divine retribution, all come to life, washing over the audience,” the Shen Yun website states.

“I enjoyed getting to know some of the historical cultural dances of China,” Mr. Stein said. “It actually left me with a desire to go learn more about Chinese culture.”

“‘The Monkey King’ was fun. I liked how it was able to bring in divine elements with the screen behind it.” Mr. Stein was impressed by how the dancers appear to pass seamlessly between the stage and the backdrop scenes.

“I loved all the scarves,” Ms. Dougherty said. “I loved the water—thought that was absolutely beautiful.” She was referring to the dance “Fairies of the Sea,” which draws on ancient Chinese legends of fairy maidens who are visible only to the pure of heart, according to the program book. The performers dance with long silk fans that ripple like waves.

The erhu solo particularly touched Ms. Dougherty’s heart. “I love it. I love the two-stringed erhu. The sound of that is so… It’s such a haunting sound. It’s lovely. It’s very mystical to me,” she said.