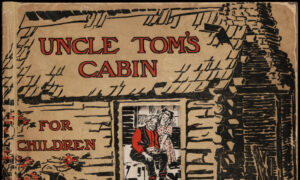 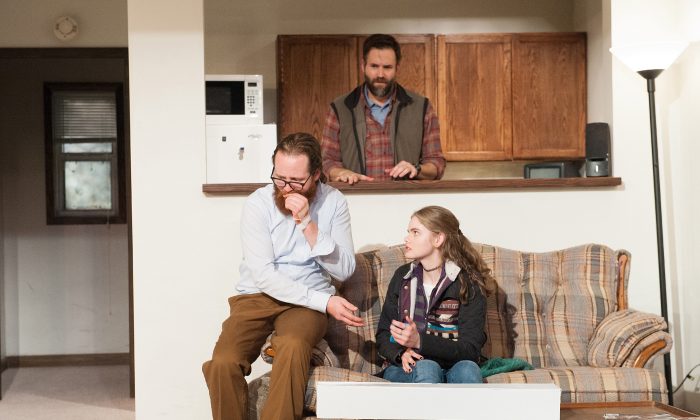 Mentally ill Ellis (William Apps) is constantly monitored by nurse Barrett (Connor Barrett, in the background), especially when he has visitors, such as young Catherine (Katherine Reis), in “The Purple Lights of Joppa, Illinois.” (Ahron Foster)
Arts & Culture

NEW YORK—How can you move on from the sins and stigma of the past when you’re still trapped by their effects? It’s a question Adam Rapp brilliantly answers in his all-too-human drama “The Purple Lights of Joppa Illinois,” now at the Atlantic Theater Stage 2.

Ellis (William Apps), in his early 40s, is someone most people would basically ignore. He works at night buffing floors and appears somewhat slovenly dressed. He has an air of discomfort about him.

Yet today he is tucking in his shirt, making sure he’s wearing deodorant, and playing hip-hop music, which he obviously never listens to, much less understands. He is preparing to welcome two teenage girls into his apartment.

Monique (Susan Hayward) puts Ellis off rather quickly with her overbearing manner and habit of using foul language. Catherine (Katherine Reis), the younger and quieter of the pair, is content to observe things and people, particularly Ellis, before saying or doing much.

Revealing why the girls are present would tell too much of the plot, but suffice it to say there is a deep connection between one of them and Ellis. The other young lady is there for moral support, and is ready in case Ellis is unable to maintain his already precarious equilibrium.

Ellis suffers from bipolar affective disorder, and psychosis as well—a condition where even the smallest change, such as moving a lamp, can send him into a full-blown episode.

He was recently released from confinement due to something that happened before he was placed on medication—an event that still haunts him. And he remains under constant supervision, electronic and personal, the latter by nurse Barrett (Connor Barrett).

While Ellis realizes full well his situation and tries to keep his life as calm and uneventful as possible, he feels terrible loneliness and stagnation.

His meeting with the girls is an effort to build a bridge to something outside his memories and also an attempt to allow him to move forward in a positive and hopeful manner.

Playwright Adam Rapp eschews his usual shock effects and bleak visions of the future and instead goes for something softer and more intimate. The play explores how past events can continue to color the future of both the person who caused them and those affected, and shows it’s not always easy to forgive past actions, even when knowing the complete circumstances behind them. The idea is masterfully implemented due to the characters and situation feeling absolutely real.

Rapp, who also directs the work, helps matters along by giving out information slowly. The audience cannot form definite opinions about any of the characters until they’ve had a chance to know them.

The dangers of second- and third-hand information is another point Rapp makes. Perceptions and assumptions color the characters’ impressions of certain events, and they are often incorrect.

Overall, we see the importance of making contact with others. One clearly sees Ellis yearning for some kind of human interaction, even as he is afraid of it. His efforts are not always met with acceptance and certainly not with open arms. Yet in the end, as Rapp shows, the possibilities of forgiveness and hope are sometimes all we have to keep us going.

Apps expertly plays Ellis as a man who is walking on eggshells. His delight at seeing his visitors is offset by the fear that the slightest deviation from his normal routine will send him over the edge.

Reis does well as Catherine, a 13-year-old girl trying to understand this man she has heard so much about and now has to figure out how much of what she has heard is true.

Heyward has the funniest lines in the story, nicely coming off as a street-smart sort who doesn’t trust people easily.

Barrett does well as the nurse, the authority figure in the piece, and the one who provides the most exposition. The facts he divulges occur after the others have been on stage for a while and serve to fill in the back story rather than set the tone for the tale.

Andromache Chalfant’s set of Ellis’s nondescript apartment—a place with almost no trace of personality—perfectly reflects the man who lives there.

A powerful look at a man teetering on an abyss, his desperate efforts to keep his balance, and those around him struggling to understand, “The Purple Lights of Joppa Illinois” is both thoughtful and touching.

Judd Hollander is a member of the Drama Desk and reviewer for Stagebuzz.com and Theaterscene.com