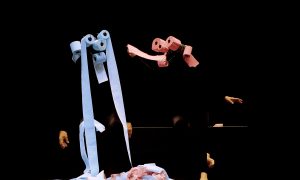 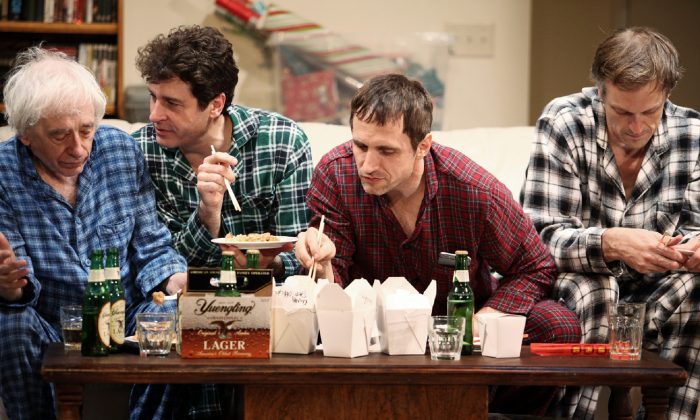 NEW YORK—Playwright Young Jean Lee, born in Korea but brought to the United States at the age of 2, is noted for her dealing with subject matter seemingly far from her personal experiences.

In Straight White Men, now in its New York premiere at the Public Theater, she takes on an apparently conventional American father-son drama.

A family consisting of three grown sons and their father are having a reunion at Christmas time in an unnamed Midwestern city.

These grown men—Jake is a banker, Drew an award-winning up-and-coming fiction writer—act like kids, at least under these unsupervised circumstances.

To further pass the time, Drew and Jake take out a game of Monopoly, renamed Privilege by their now-deceased mother, so that the offspring playing this reworked game remember that there are people not as well-off as they.

The stance of liberalism permeates the family: Drew has written a novel that speaks of the “crassness of American materialism.” Matt, it comes out, has defended minorities to the extent of leading a protest in grade school when the drama teacher cast only white people in a production of “Oklahoma.”

When Matt and Ed arrive with the Christmas tree, a fake one at that, Ed is roundly teased. But Ed takes the teasing in good stride; he is a remarkably permissive and caring dad.

Later, after all have enjoyed a takeout Chinese dinner together, a minor crisis erupts. Seemingly for no reason, Matt bursts into tears. A highly intelligent fellow who has attended the finest schools and should be doing well in the world of work, Matt, who is in his 40s, has been living with his father for some time.

Matt has contented himself, or so it seems, with a series of temp jobs. Although these jobs are suffused with social awareness and deal with all the good benefits that everyone should be able to enjoy, he is always at the bottom end of the responsibility and financial gain ladder.

Much of the latter part of the play is taken up with the efforts of all the family gathering around Matt to help solve his problem. They analyze it: Does he lack self-esteem? Is he depressed because he has not been able to pay back his student loans?

Even when dad Ed offers to pay off the loans, Matt refuses. He will not be comforted. But he insists that there is nothing pathologically wrong with him and refuses the possibility of psychotherapy.

His problem can perhaps best be described as anomie, an undefined feeling of aimlessness. Does Ms. Lee imply that this exists in many of us? She supplies no hard-and-fast conclusion.

Perhaps some viewers are left with a sense of uncertainty. In this world, concrete achievement is viewed as the proper norm.

Ms. Lee, who also directed the piece, has brought out the best in her actors. The fine Austin Pendleton, who always seems to supply the element of charm in his varied portrayals, does not disappoint here.

James Stanley’s Matt conveys a sense of uncertainty and a mild sadness, which does not go too far into a depressive state.

Pete Simpson’s Drew is truly the baby of the family and is given to pout when things don’t go his way. Gary Wilmes’s Jake has the swagger a hotshot banker might display.