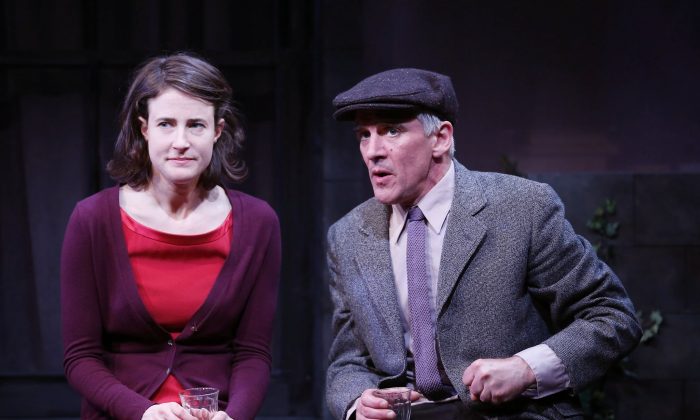 Desk Award-nominated actress Xanthe Elbrick and Obie Award-winning actor Patrick Fitzgerald play a couple who have found each other but yet don’t fit in one another’s world. (Carol Rosegg)
Arts & Culture

NEW YORK—A man is torn between the love of a woman and the love of his profession in Gardner McKay’s touching 1971 work Sea Marks, now being given a first rate revival by the Irish Repertory Theatre.

Colm (Patrick Fitzgerald), a strong, forthright man in his middle years, is a fisherman by trade who lives on a remote island off the West of Ireland. He’s also never found anyone with whom to share his life.

Recalling a pretty woman he saw two years earlier when she came to the island to attend a wedding, Colm musters up the courage to write to her after first ascertaining she’s still single.

The lady, Timothea (Xanthe Elbrick), a former Welsh farm girl who now works for a book publisher in Liverpool, has no recollection of him, but is intrigued enough by his letter to begin a correspondence. This leads to a lengthy courtship by mail. Colm fills his letters with lyrical images about life on the island and his feelings for the sea and the work he does.

Eventually Timothea returns to the island, and when she has to leave almost immediately thereafter, Colm goes with her.

However “happy ever after” isn’t something that comes easy for the pair, both being set in their ways with sometimes diametrically opposed viewpoints and experiences. Timothea hates her prior existence as much as Colm loves his.

Timothea is also more aware in matters of love, having been previously married, while Colm has “never courted” until now. There’s also the matter of Timothea taking many of the letters Colm wrote her and making them into a book. The book has become a best seller, turning him into a local celebrity.

Colm accepts his newfound status, albeit begrudgingly, but when he learns of a tragedy back on the island, he realizes he must decide once and for all how he wants to spend the rest of his life.

Taking place between 1966 and 1968 and filled with haunting and image-filled passages, “Sea Marks” is a gentle yet powerful tale playing on the fish-out-of-water premise. Two people, neither comfortable in the other’s preferred environment, simply want to be together.

The show also looks at the now mostly lost art of letter writing, a practice that has been supplanted by social media, cell phones, emails, and the need in our culture for immediate gratification. As a result, there’s also an endearing element of nostalgia present in the story as it details a developing relationship. This is evident in the changing opening and closing greetings to one another, unfolding at a leisurely pace, speaking to a simpler time.

Fitzgerald is perfect as Colm, his face and bearing both a bit weather-beaten, yet still a man full of passion. He tends to be more on the quiet side, though prone to jealousy and insecurity when in an unfamiliar situation.

He can also become serious when the situation calls for it, such as when he explains why fishermen wear jerseys with markings distinctive to the areas they come from. That way, if they drown at sea and they’re found after their features have become so distorted as to become unrecognizable, their jerseys will indicate where their remains should be taken.

Elbrick is very good as Timothea, a woman who gets involved with Colm initially almost as an afterthought, yet quickly finds herself becoming attracted to the words of a man whose lifestyle is so different from her own.

She’s also the one who makes most of the decisions and suggestions in their relationship—all the way up to the point where they find their mutual situation at a crossroads.

Elbrick also has the more difficult role of the two, playing more of a supporting player in the beginning with Timothea growing into a more complicated person as the play progresses; while Fitzgerald has the advantage of winning the audience over with Colm’s use of more flowery and expressive language almost from the start.

Direction by Ciarán O’Reilly is excellent, letting the story play out slowly and naturally while showing the progression of the characters’ relationship through both seriousness and humor.

O’Reilly also effectively emphasizes the little moments in the story, such as what Colm and Timothea say to one another when first meeting after months of letter writing and their comments just before the two make love for the first time. These sequences are just as pivotal as the bigger and more expansive ones.

Charlie Corcoran’s sets of both characters’ homes are appropriately stark and bare, neither place showing any real warmth until Timothea and Colm are together in Liverpool. Costumes by Leon Dobkowski are simple yet striking, and M. Florian Staab’s sound design of the sea and other effects are very effective.

An intimate tale told with a sweeping narrative, “Sea Marks” is a story that will gently touch one’s heart.