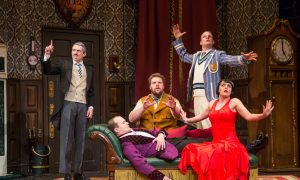 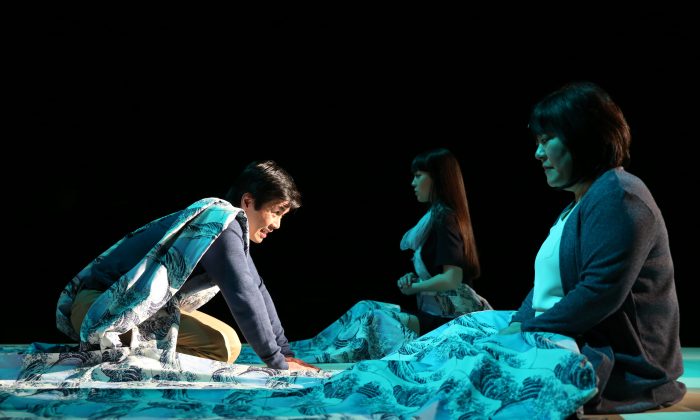 The dangers of cultural change
By Judd Hollander

NEW YORK—Change, be it good or bad, is always inevitable. The secret is never losing sight of who you are during the process, a lesson at the heart of the 1976 musical “Pacific Overtures,” currently being given a stirring revival at Classic Stage Company. The work looks at East-West relations from the Japanese point of view.

In 1853, the empire of Japan has been happily isolated from the rest the world for over two centuries. The people are content with their lives, and any foreigner who dares to venture there is immediately put to death.

A musical highlight is the absolutely delightful ‘Someone in a Tree.’

But other countries are intent on opening trade with this island nation, which culminates with the arrival of a convoy of ships from the United States under the command of Commodore Matthew Perry. In fact, the musical’s title refers to a phrase from Perry’s personal journal.

Bringing word of the foreigners’ impending arrival is Japanese fisherman Manjiro (Orville Mendoza), who has returned from America to deliver the news. Years earlier, Manjiro was driven far out to sea by a raging storm, where he was rescued by a barbarian captain (“barbarian” is how Japanese commonly refer to foreigners) and eventually wound up in Massachusetts.

Tasked with driving the Americans from Japan’s shores is Kayama (Steven Eng), a young samurai promoted to the position of police prefect just for the assignment. Kayama has been tossed a political hot potato no one wants to deal with. He is also the one who will take the blame should he fail.

With Manjiro’s help, Kayama arranges an initial face-to-face meeting with the new arrivals. Via a masterful bit of planning by the pair, the introductions leave the Americans feeling superior while the Japanese maintain their sense of honor.

However, Kayama’s success comes at a personal cost. The idea of these strangers and the “four black dragons, spitting fire” on which they travel is too much for his beloved wife Tamate (Kimberly Immanuel, the night I saw the show). Tamate has lived with the fear of what will happen to her husband if things don’t go as planned.

Ironically, while the meeting is deemed successful, it nonetheless opens the door for the arrival of representatives from other countries. All are determined to carve out their own particular niche in this new market.

This situation is brought brilliantly to life in “Please Hello”—a comic number where a once powerful lord (Thom Sesma) is quickly overwhelmed by the weight of diplomacy as he tries to deal with the demands of one nation after another.

Then there is the far more sinister “A Bowler Hat,” showing Kayama becoming more and more accustomed to Western practices as his own political star rises.

Another pointed lesson is found in the song “Welcome to Kanagawa.” The madam of a local brothel (Ann Harada) and her girls (all played by men in this production) welcome the arriving American sailors with promises of carnal pleasure. The madam is quick to take advantage of a new opportunity, like any good entrepreneur.

Though “Pacific Overtures” clearly shows how Japan and Japanese culture suffered due to the forced intermingling of other cultures, in actuality, John Weidman’s book and Stephen Sondheim’s score, with additional material by Hugh Wheeler, is far more nuanced.

Early on Manjiro extols the opportunity inherit in America, while condemning the rigidness of Japanese society. He notes it’s only through American influence that a fisherman could wind up the friend of a samurai.

A musical highlight is the absolutely delightful “Someone in a Tree” where those who witnessed that first meeting with Americans try to recall what they heard and saw, but in the end can only give impressions of what went on rather than anything more substantial.

These comments become all the more telling as the story reaches its conclusion: those vowing to take their country back to the way it was are pitted against those who feel the only way to defeat outside influences is to become like them, only stronger.

George Takei lends the proper bit of authority as the Reciter.

Director John Doyle has done an excellent job here, cutting scenes and songs from the original work (including some of the more overly anti-Western moments) to give the story a more streamlined approach, and at times, almost a fluidity. While the result may upset some theatrical purists, what one is left with is something quite intimate and emotionally connected.

The cast, many playing multiple roles, is quite enjoyable. In addition to those already mentioned, George Takei lends the proper bit of authority as the Reciter, offering background on the various situations while at times inserting himself into the story as it unfolds.

Offering a powerful lesson of the perils of change and the dangers of becoming too much like those you initially despise, “Pacific Overtures” is an eye-opening delight.