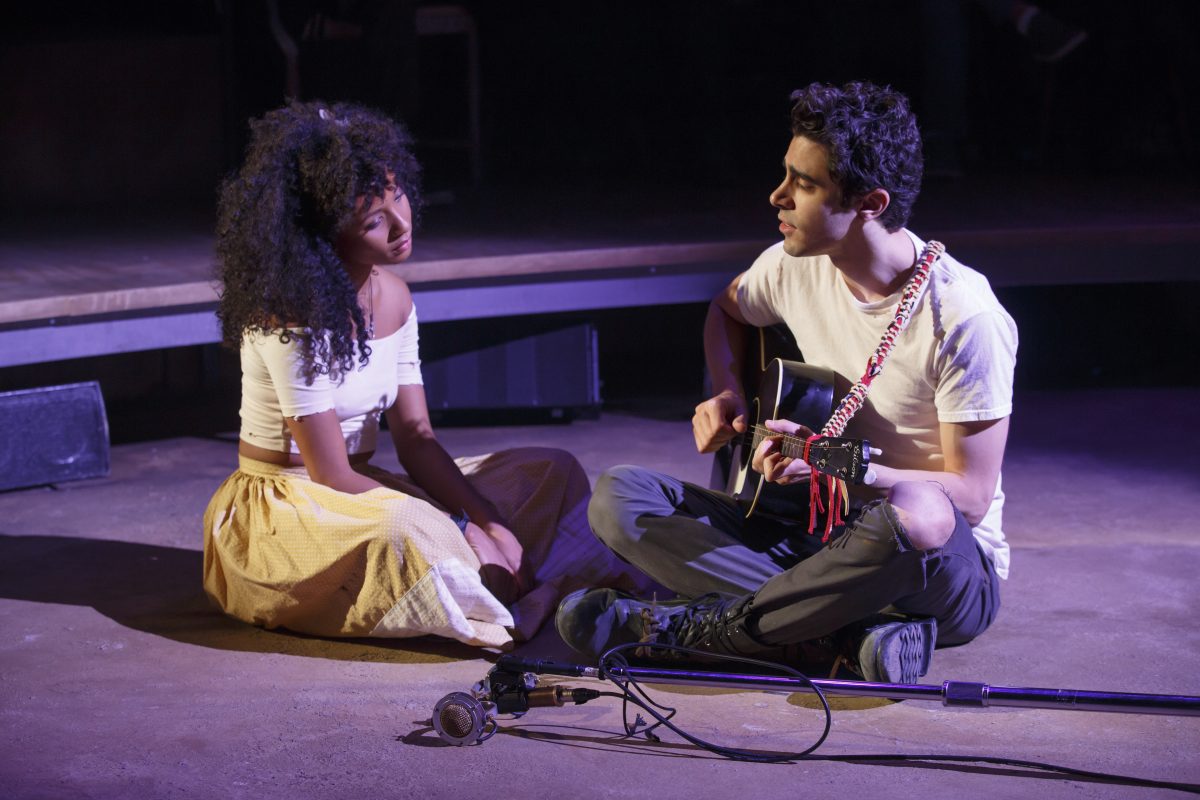 Eurydice (Nabiyah Be) and Orpheus (Damon Daunno) in the new folk opera, “Hadestown,” inspired by the Greek myth of poet who journeys to hell to retrieve his beloved. (Joan Marcus)
Arts & Culture

Where love and doubt walk hand in hand
BY Judd Hollander TIMEJuly 11, 2016 PRINT

Orpheus (Damon Daunno) is a young man with a singing voice so angelic it can make clouds part and stones weep. Falling in love with Eurydice (Nabiyah Be), he soon charms this somewhat cynical woman who knows full well how cruel the world can be.

But as their summer courtship turns to winter, and with Orpheus seemingly more interested in his songs than his new wife, Eurydice finds herself falling under the spell of Hades (Patrick Page), ruler of the underworld. Having become too fearful of the harshness of the world, she instead chooses death, believing Hades will provide for her for eternity.

However, Hades’s vision of the afterlife is not what she expects. He uses his legions of dead souls to create a gigantic electrified city—cold, impersonal, and inexorably growing. The city is surrounded by a wall to keep out poverty and undesirables.

Hades does all this to impress his wife, Persephone (Amber Gray), from whom he has long since grown apart. Persephone, a woman who clearly loves life, spends the spring and summer months each year on Earth, before going below to be with her husband for the fall and winter.

‘Hadestown’ is at its heart an exploration of what love means.

To Hadestown determined Orpheus willingly descends. With a little help from Hermes (Chris Sullivan), who also serves as the show’s narrator, Orpheus attempts to bring Eurydice back to the land of the living.

“Hadestown” is at its heart an exploration of what love means. More than flowery promises, it’s about the trust and belief you place in another, as well as the patience to allow those qualities to be returned in kind.

Conversely, while Orpheus and Eurydice’s experiences cause them to mature and become more realistic, Hades and Persephone re-experience love’s first bloom as they recall how they fell in love in the first place. Their rediscovery, told through music and dance, is one of the most touching moments of this story.

As regards doubt, Hades has built a world on the backs and souls of others in a desperate attempt to impress Persephone, with little thought to those under his domination.

Orpheus’s presence in Hadestown places Hades between the proverbial rock and a hard place. The ruler, who has been unyielding for so long, fears that showing mercy, which he would love to do to earn Persephone’s approval, will cause him to be seen as weak and open the way for underlings to turn against him. Yet without compassion, he risks turning those he would refuse to spare into martyrs, which could also inspire rebellion.

The position Hades finds himself in shows the paralyzing effect of doubt, and  that can cause one to lose faith in others, despite all assurances to the contrary. Doubt, which many of the characters experience, proves to be the antithesis of love and can lead to their downfall.

Doubt, which many of the characters experience, proves to be the antithesis of love.

Tightly directed by Rachel Chavkin, who helped develop the piece, one feels literally a part of the story from beginning to end.

This feeling is helped in no small part by the transformation of the New York Theatre Workshop’s interior to surround the action with stadium-like seating on three sides. The actors move up and down the aisles, helping to illustrate perfectly the journey to hell and hopefully back again.

The score, ranging from ballads to bluegrass, is brilliant. One of the highlights is when Persephone enjoys her last few moments of freedom on Earth before returning to Hadestown; the scene takes on the aura of a classic New Orleans jazz funeral.

Page turns in a bravura performance as Hades, and Gray is wonderful as Persephone. Her performance captures both the exuberance of a bird in a flight and one trapped in a cage.

Be and Daunno are perfect as the young lovers. Their youth does not allow as much character development as their older counterparts, but it certainly makes them appealing.

Theater Review: ‘Shuffle Along, or the Making of the Musical Sensation of 1921 and All That Followed’

Sullivan is fine as Hermes, delivering his lines with the wistfulness of one who has told this tale countless times, and will do so countless more.

Adding a nice touch to the proceedings are the three Fates (Lulu Fall, Jessie Shelton, Shaina Taub) who function as a sort of Greek chorus, both in words and song.

With a story of love, loss, and rebirth both timeless and universal, “Hadestown” makes for a totally thrilling experience.