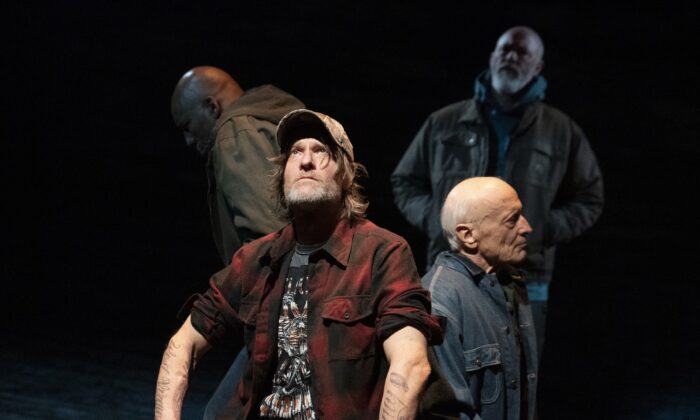 NEW YORK—Death statistics should not be simply filed and forgotten. What writers Jessica Blank and Erik Jensen set out to do with their moving documentary-theater piece “Coal Country” is show that the 29 coal miners who died in the 2010 disaster at the Upper Big Branch Mine in West Virginia were more than just statistics in a ledger.

Most of the show’s text is taken from interviews conducted in 2016 with those directly affected by the tragedy, while other material comes from trial transcripts. The original music by Steve Earle, who serves as the show’s music director and sole musician, also adds, as he notes, a few words of his own to the story.

As these coal miners’ lives start to unfold before the audience, we begin to understand how it wasn’t uncommon for the men to have a connection to the mine that stretched back decades. Gary (Thomas Kopache), who had 34 years of mining experience himself, proudly points out how he, his father, grandfather, and then his son all worked in the mine.

Indeed, it was not uncommon to have multiple members of the same family working side by side deep within the earth. Those who went away to college for a time usually ended up working there. Even if some didn’t actually work in a mine—working where one never sees the sky is not for everyone—one would likely work for the mine in some other capacity.

Roosevelt (Ezra Knight), for example, ended up working as a mining dispatcher, while his dad labored underground. The entire place was basically a company town. And those industries that didn’t deal directly with the mine were almost certainly dependent on it for a major portion of their businesses.

Just as the audience gets to know those who worked at the mine—all drawn as down-to-earth characters who give off a next-door-neighbor familiarity—the show provides a general explanation of mining life, a Coal Mining 101. For example, the top-quality coal, and therefore the kind fetching the highest price, was located so far down that it took an hour and a half just to get there—and this in a vehicle.

But as Gary notes, in his day, you were treated like family when you worked at the mine, but changing times, new mine owners, and, in the race for increased productivity, the ignoring of various safety rules, changed all that. The mine became, in the words of Goose (Michael Gaston), another veteran miner, “a ticking time bomb.”

“Coal Country” presents a deeply involving story of those at the lower links of the coal food chain. These people are forced to work in evermore dangerous conditions by those  interested only in the financial bottom line.

While the obvious thing when faced with unsafe working conditions is simply to walk away, the coal miners had done the same thing all their lives and couldn’t easily conceive of doing anything else. This point is made through conversations between Goose and his wife (Amelia Campbell), as well as by recollections from Patti (Mary Bacon), who urged her husband not to return to the mine because he wasn’t feeling well.

At one point, some miners were so afraid of getting laid off that they refused to talk to the safety inspectors who went there to check on any alleged problems. One man eventually sees it as his duty to speak up for those who were no longer there, because they could no longer speak for themselves. He also feels more than a little guilt for not speaking up earlier.

The actors bring the characters and situations to life and help to create, on a basically bare stage, the atmosphere and camaraderie around the company town, as well as the shock, horror, and helplessness they feel when the accident occurs. Ever-present, too, is the feeling of anger at how they are treated by the company and others in the aftermath of what happened.

The text is at times punctuated by songs, which help to add folksiness and additional poignancy.

Richard Hoover’s set works quite well. Its sometimes oppressive and stark look give a feeling similar to the isolation one might feel when working deep in a coal mine. The costumes by Jessica Jahn are realistic and perfectly fit the characters depicted.

As director as well as writer, Ms. Blank keeps the show’s narrative tightly focused. The creative team concentrates on only a few specific stories, but acknowledges all of them toward the end.

“Coal Country” reminds its audience how every person leaves a mark during his or her life—a mark that can last as long as there are those who remember it.

Judd Hollander is a contributor to Stagebuzz.com and a member of the Drama Desk and Outer Critics Circle.