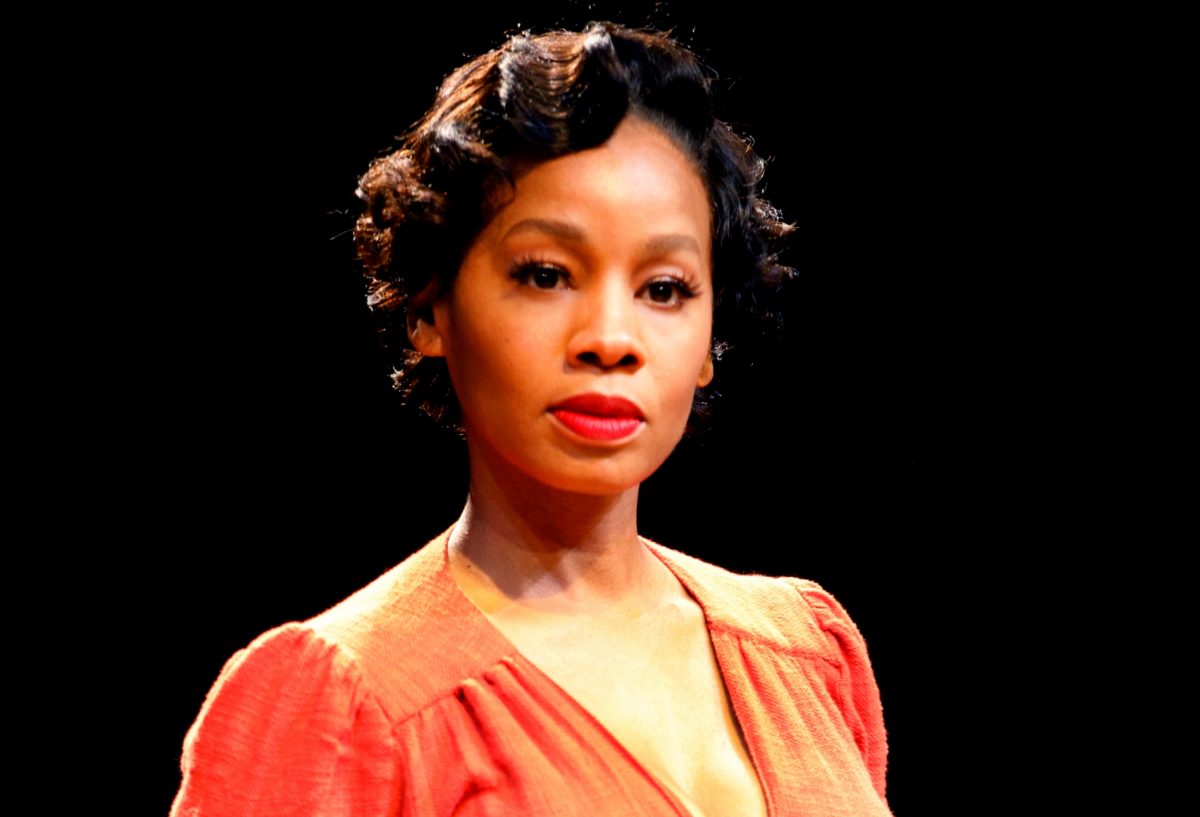 Stellar cast, but too much story is lost
BY Judd Hollander TIMEJuly 5, 2018 PRINT

NEW YORK—The story of a man falling for the wrong woman is an oft-told tale, so the key to this kind of tale’s effect is in just how it’s presented. Classic Stage Company’s offering of the 1943 Broadway musical “Carmen Jones,” which features a book and lyrics by Oscar Hammerstein II and music from Georges Bizet’s “Carmen,” marks the show’s first major New York revival in 75 years. Yet, while the elements for a classic melodrama are all there, the work ultimately suffers from a lack of subtlety and characterization.

The story takes place during War II at a parachute factory somewhere in the American South. Among the workers there, a mixture of Army and civilian personnel, is Carmen Jones (the stunning Anika Noni Rose), a woman who knows full well the sexual allure she possesses. She’s the object of desire for most of the men, while earning the enmity of most of the women, one of whom refers to her as a “hip-swingin’ floozy.”

While Carmen has no shortage of offers for male companionship, such as Sergeant Brown (Tramell Tillman), who has recently arrived from New York, she’s more interested in those who do not want her, at least at first. She relishes the chase, just as much as the inevitable conquest.

Currently, she has her eyes on Joe (Clifton Duncan), a soldier who is trying to be faithful to his girl back home, Cindy Lou (Lindsay Roberts). Yet, his efforts in this regard become quickly little more than half-hearted as he finds himself becoming more and more attracted to Carmen and to what she has to offer.

Despite his succumbing to her charms, it’s not long before Carmen casts her eyes toward greener pastures, such as possibly Sergeant Brown, and quite definitely Husky Miller (David Aron Damane), a professional fighter who’s passing through town.

Matters finally come to a head one day in Chicago. Carmen has traveled there at the behest of Miller, while Joe, who has come with her and is now wanted by the authorities for desertion, among other things, has no intention of letting her go.

“Carmen Jones” offers a powerful story of lust and obsession. Although the cast is quite good, the storyline feels one-dimensional, with only the occasional hint of something deeper.

John Doyle’s often lackluster direction puts too much emphasis on emotion rather than characterization, missing nuances. For example, Rose delivers a knockout performance in the title role, with her every movement and gesture telegraphing sex, spite, and purpose. Yet the few times she says that she is actually in love with Joe, be it through dialogue or song, she doesn’t feel believable. The two characters never once have an intimate moment, which could have easily been indicated by the director.

In this same vein, while Duncan does a good job in showing Joe’s inner conflict as he initially struggles to resist Carmen’s allure, as well as with his ever-growing obsession for her, any actual love he claims to have for her never seems realistic. Indeed, the entire book seems rather disjointed and rushed.

Since the script was initially two acts and was cut to under two hours, perhaps too much of the story has been lost. This is especially true when it comes to the secondary characters. Miller, for example, has little to do dramatically, other than preen a bit and get off a couple of good one-liners. As for Cindy Lou, while she is steadfast in her love for Joe throughout, we never learn how that love began. The rest of the cast does a good job with what they have to work with, but it would have really been nice if they all had a bit more of a backstory.

With all this said, the high point of the show should have been its score. Operatic and orchestrated with a bit of a bluesy feel, the music is delivered by the cast with gusto. Unfortunately, all too frequently, the lyrics are impossible to hear clearly. They’re often drowned out by the accompanying music or simply lost in the Classic Stage space itself. This misfire with Dan Moses Schreier’s sound design blunts the information and emotions the songs were to meant to bring out.

The set design by Scott Pask works well. The smallish playing area gives just enough of an identity to ground the story in the locations and era depicted. The show is also helped by Ann Hould-Ward’s costumes. The clothes several of the women wear at a Chicago country club offer a contrast to the earlier drab but functional garments they wore at the factory.

This production of “Carmen Jones” is an interesting theatrical curio. However, with the right emphasis in certain areas, it could have been memorable.