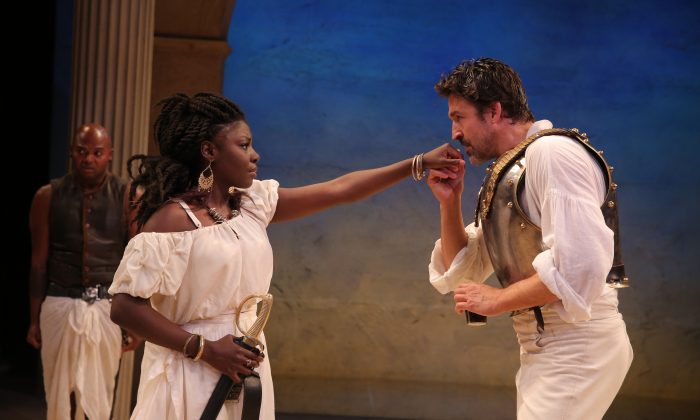 (C–R) Cleopatra (Joaquina Kalukango) and her besotted Antony (Jonathan Cake), with Chivas Michael behind, as they appear in “Antony and Cleopatra.” (Joan Marcus)
Arts & Culture

NEW YORK—Love has the potential for great joy and great danger. This is the case with William Shakespeare’s Antony and Cleopatra, where political reality and matters of the heart don’t always go hand in hand.

The story is being given a stirring revival at The Public Theater in collaboration with the Royal Shakespeare Company.

Mark Antony (Jonathan Cake), a highly regarded Roman soldier, has traveled to Egypt on a military campaign only to fall head over heels in love with the Egyptian Queen Cleopatra (Joaquina Kalukango).

While fully aware he’s neglecting his duties, Antony finds himself completely helpless as Cleopatra uses her feminine wiles to keep him by her side. When Antony finally does return to Rome, he finds it about to be plunged into civil war as Emperor Octavius Caesar (Samuel Collings) and General Sextus Pompey (Ash Hunter) battle for control.

Already under suspicion by Caesar for his activities in Egypt, Antony, in order to remain in Caesar’s good graces, must marry the Emperor’s sister Octavia (Charise Castro-Smith), thus creating a familial bond between the two men.

Not surprisingly, Cleopatra doesn’t take kindly to the news, yet bides her time until Antony returns. When he eventually does just that, their passion once again explodes with Antony forsaking everything he once held dear to lead his men against Caesar and the invading Romans.

Presented here in a stripped-down production by Tarell Alvin McCraney, who’s listed as both director and editor of the piece, the action is moved from ancient Rome and Egypt to 18th century Saint-Domingue.

The production plays up the various political elements of the story where friends and enemies become allies out of necessity and circumstance. This is clear not only with Antony’s marriage to Octavia but also through the words of Enobarbus (Chukwudi Iwuji), Antony’s trusted friend.

Enobarbus knows that celebrations of unity, like the one arranged between Caesar and Pompey, are often a sham. Enobarbus’s offhanded comments to Pompey’s confident Menas (Sarah Niles) are rather telling on the subject.

While Antony’s love for Cleopatra is never in doubt, the depth of her love is uncertain. Obviously attracted to him, she is first and foremost the Queen of Egypt. She always thinks in that capacity and tries to make things easier for her country when dealing with Rome.

Even when her love for Antony becomes plain to see, she is still determined to control her ultimate destiny, while Antony is more concerned about simply remaining with Cleopatra.

Cake is wonderful as Antony, the character being the glue that holds the production together. For while he is consumed with love for Cleopatra, he also proves himself to be a brilliant soldier and tactician, at least until he allows himself to be controlled by emotions when he should be relying on reason.

Kalukango makes a good Cleopatra, though her role is pretty much a reactive one here. This is one of the few failings of the production in that the audience seldom gets a chance to be inside Cleopatra’s head. Cleopatra also is set apart from the major thrust of the story until the final third of the play.

Still Kalukango does fine in the role of the sensual and cunning monarch who usually manages to stay one step ahead of various would-be conquerors.

Collings is a good as Caesar, a man whose political desires are tempered with the constraints of reality. Though there is one moment when the character indulges in an emotional outburst toward Antony that doesn’t ring true, especially considering how he’s felt toward him till that time.

Iwuji does very well as Enobarbus, a character with some of the most telling lines in the play. He would follow Antony wherever he goes, at least until he decides to make a better deal for himself.

McCraney does good directorial work, playing up the action and intrigue of the story and keeping the pace moving smoothly. Also quite good is Iwuji in his capacity as fight director; nothing happens on stage that feels overly staged or unrealistic. Tom Piper’s sets are well done and nicely fit the story.

While there are some cuts that diminish the depth of the story, the production is sturdily presented, and the core of Antony and Cleopatra still comes through—that of a man who just wants to be with the woman he loves, but is trapped in a world that won’t let him do so without a fight.

Also in the cast are Chivas Michael, Henry Stram, and Ian Lassiter.