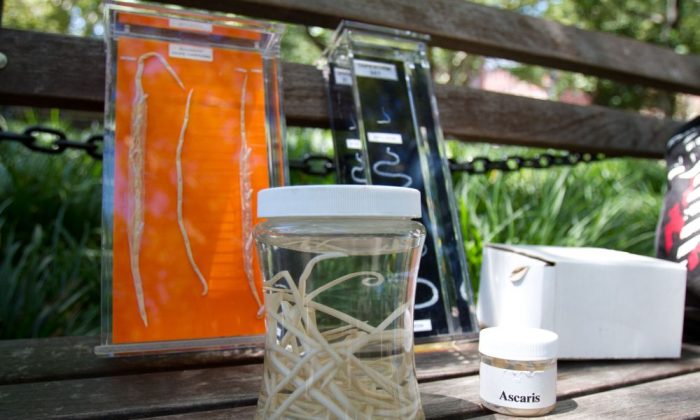 Ascaris lumbricoides and other tapeworms are stored in different size containers by Planting Peace, to raise awareness about the wide spread issue in Haiti and undeveloped countries. According to the U.S. Center for Disease Control, a quarter of the world’s population suffers from Ascaris lumbricoides (Benjamin Chasteen/The Epoch Times)
Health News

The Worm: A Sight You Will Never Forget

“Would you like ice in your drink?” To this, I normally say yes. But there are times when I say an emphatic no. I know, when traveling in the less hygienic part of the world, having an icy drink may result in the “Hong Kong Trots” or “Montezuma’s Revenge” On an unlucky day, even hepatitis B infection. Even in some North American locations, I sometimes decline ice. Why? Because I never want to see Ascaris lumbricoides in the toilet bowl. If it ever happens to you, it’s a sight you will never forget.

During my time as a family doctor, a family arrived with their young frightened son. Following a bowel movement he had noticed what he described as a “garden worm” in the toilet, and he had fished it out. Identification proved it to be Ascaris lumbricoides.

How had the boy contacted this worm? Millions of dogs, cats, and other animals are now sharing close quarters with North American families. At times this results in serious injury when an animal mangles a child. But other problems are less obvious and young children are particularly vulnerable.

Dogs and cats often defecate in playground areas. One study of 229 family dogs showed that 189 had roundworm, hookworm, tapeworm, or other parasites. Children who swallow a parasite egg can later pass a worm as long as one foot. Can this also happen to adults? You bet, and it can make their hair stand on end.

Roundworms are very fertile, laying up to 100,000 eggs in a single day. If one of these eggs is accidentally ingested by a dog, the worm hatches and makes its way to the intestines, an ideal feeding ground to be passed on later to humans.

Ascaris lumbricoides can also trigger human intestinal symptoms. A 65-year-old man was admitted to emergency complaining of vomiting and severe pain suggestive of intestinal obstruction. X-rays confirmed the diagnosis. But just before surgery the man suddenly expelled a huge lump of worms. His symptoms quickly subsided.

I’m sure many readers are thinking this problem is rare. After all, we don’t live in the tropics. But according to the U.S. Center for Disease Control, a quarter of the world’s population suffers from Ascaris lumbricoides. And 4 million North Americans harbor this worm.

During a visit to the London School of Hygiene and Tropical Medicine, I discovered that worms can cause more than intestinal obstruction. One of the school’s doctors had a hair-raising experience. He was performing a routine eye examination when suddenly he observed an exotic worm from West Africa crossing the patient’s eyeball. On rare occasions Ascaris lumbricoides can also infect the eye.

So can you prevent having your hair stand on end? I love dogs, but I’ve often watched friends run their hands down their beloved Fido’s tail, then reach for the ice cubes! Worms such as Ascaris are picked up from fecal contamination. And I’ve never seen Fido washing his tail after defecating. This is when I say “no” to ice cubes in my drink. But Fido isn’t the only animal that can cause problems.

Pregnant women must be careful of cats as their feces can cause toxoplasmosis. During pregnancy this parasite can be transmitted to the fetus resulting in serious birth defects. So, when pregnant, let someone else clean out the litter box.

Remember that pet squirrels have a tendency to bite. Turtles can pass along salmonella infection to the entire family causing severe diarrhea. So it’s not prudent to dump turtle water into the kitchen sink. Parrots, parakeets, and pigeons are noted for causing a lung infection called psittacosis. Monkeys are dangerous pets. If you are crazy enough to keep one in the house, you may end up suffering from hepatitis, measles, encephalitis, or amoebic dysentery. Or losing friends!

Suppose your child can’t live without owning a hamster. These animals can cause lymphocytic choriomeningitis. So make sure you buy it from a colony that has been screened for this virus.

It’s been said that cleanliness is next to godliness, and who can argue with this advice? But it can also save you from having your hair stand on end.