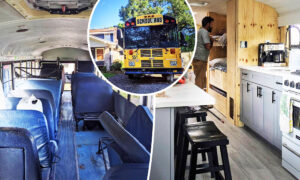 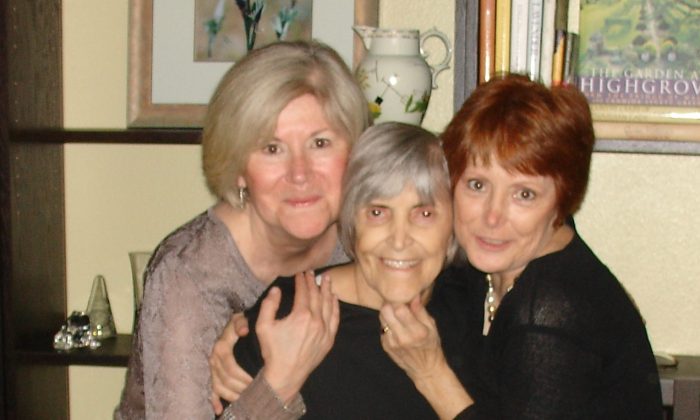 The Weight of Caring for a Family Member With Dementia

Watching a loved one experience any type of mental decline is gut-wrenching for everyone in the family, and trying to care for someone with dementia can be physically and emotionally taxing on the family caregiver. But one woman in southern California is striving to make the process a little bit easier on everyone.

Kae Hammond’s mother Shirley was diagnosed with a “mild cognitive impairment” in the summer of 1992.

“At that time, it was a relief to have an understanding of what was causing the changes in my mother,” Hammond told The Epoch Times. “That said, none of us had any expectations of what would be coming beyond that.”

Tragically, within a matter of four years her condition deteriorated into Alzheimer’s. Dementia, the overarching term for diseases like Alzheimer’s, is a condition that will touch many people’s lives at some point.

There are 5.7 million people who have been diagnosed with Alzheimer’s living in the United States, according to Hammond, who has written a book about caregiving for people with dementia based on her research and personal experiences.

She also is the founder of the Dementia Help Center, which provides information and resources for families. November is National Alzheimer’s Disease Awareness Month, and also National Family Caregivers Month.

Learning how to properly care for a loved one while also taking care of oneself is crucial for the well-being of both parties, Hammond says, especially in the early days following a diagnosis.

“Accept the reality of the situation as soon as possible because we hold on to denial for a very, very long time, and when we’re in denial we’re not really open to valuable insights, education, and knowledge,” she advised.

During a family gathering not long after her diagnosis, her mother announced to the family that she had Alzheimer’s. She asked the family to be patient with her, and informed them that her behavior would likely change over time.

This is a good strategy, says Hammond.

“Be honest with your family. Be open with them. Share the information that you’ve gotten from your medical team, do your research, and sit down and have a real open conversation. Let everybody know what’s going on,” Hammond explained. “The more forthright we are with our family, the more likely they will be able to be the support mechanism for each other that is really necessary.”

Alzheimer’s is a slow, progressive disease. In Hammond’s mother’s case, her memory began to deteriorate a year after her diagnosis. One of the first times she really began to notice was after her nephew’s birthday party.

“At that moment I thought, ‘Oh my God. We have a monumental problem,'” Hammond recalled.

Hammond says not to argue with a loved one with dementia because it will only be distressing for them.

Similarly, a loved one with dementia may ask a question that has a disturbing answer, and Hammond recommends telling what she calls “therapeutic tales.” These are fictional stories that satisfy an answer that someone with dementia is looking for.

“The reason I believe in these, what I call therapeutic tales, is our loved ones are looking for an answer to a question, and oftentimes the true answer isn’t what they want to hear, which is going to distress them,” Hammond explained.

Hammond’s mother’s memory was not the only change in her behavior. She started to become paranoid and suspicious of the people around her. Her mood was also extremely volatile. Furthermore, she began to lose her social filter, and would have outbursts.

“It made me feel so badly for her because of how it made her look to other people, and 90 percent of the people didn’t understand what was going on with her, so they didn’t understand the disease. It was extremely painful to have that happen,” Hammond recalled.

Hammond had to face many difficult situations with her mother as the disease progressed.

The worst episode happened in early 2008. Hammond’s father Mike had undergone cardiovascular surgery, and there were some unfortunate complications. She and her mother were going to the hospital to visit him when the Alzheimer’s had a horrifying impact on Hammond.

As they were getting ready to leave, Hammond’s mother looked at her and said: “I’m not going with you. Don’t call me mom. I’m not your mom.”

“My mother absolutely believed that I was not her daughter, and that I was an impostor. And she was terrified of me,” Hammond recalled, holding back tears.

Hammond wondered what she could do to prove to her mother that she was in fact her daughter. She had a scar on her wrist from a childhood accident, and showed her the scar, but her mother looked at her and said: “Oh you’re good. You’re very, very good, but you’re not my daughter and you cannot be near me.”

“It was excruciating. She refused to accept me as her daughter,” Hammond remembered. Hammond’s sister convinced their mother to let Hammond take her to the rehab center to visit their father. When they left the center, the episode was over.

Experiences like this can be traumatic, and suffering in silence doesn’t help. Hammond suggests finding a support group for family members caring for a relative with dementia. Sometimes it takes trying a few different support groups until you find the one that is most therapeutic and effective for you.

“The reason I’m a huge proponent for support groups—and of finding the right one—is no one will understand what you’re going through better than them. No one will get it like they do,” Hammond said. “They will be your greatest allies and support and comfort through the entire journey and afterward.”

Hammond lived about a 4-hour drive from her parents. She began visiting them every third weekend for three or four days to take some of the pressure off of her father, who had taken on the responsibility as the primary caregiver.

Many people who have a parent or a relative with dementia don’t visit because they don’t want to see their loved one in such a state. However, it’s important to do so even if it’s painful.

“Truly one of the worst things about the disease is the isolation that happens to the diagnosed and the immediate care partner,” Hammond said.

At first, her father took advantage of the break and would go play golf with his friends while Hammond looked after her mother. However, he started taking less time for himself and it started to have a negative impact.

Hammond’s father suffered a heart attack, and was scheduled to have triple bypass surgery. The surgery was a success, but the stress of taking care of his wife had taken a toll on him.

“My father’s health and his system was so compromised by the stress now of these years of pressures with my mom that he had really horrific complications,” Hammond explained.

Seven months later, Hammond and her sister moved their parents into an assisted living home. They furnished the home with all of their parents’ belongings, which made their mother comfortable and calm on the day of the move. She never questioned why they were in a different home.

Tragically, Hammond’s father was not regaining his strength and his health continued to decline. He suffered another heart attack, and his kidneys began to fail. Hammond’s father passed away on Dec. 17, 2008.

It would be almost another 10 years before Hammond’s mother passed away too.

After her father’s passing, Hammond learned from the National Alzheimer’s Association that 64 percent of people caring for a family member with dementia will develop a chronic health condition, or pass away before the loved one they are caring for.

“I just sat frozen. And then I called my sister and I said, ‘I just read something. Now I know what happened to dad,”‘ Hammond recalled.

They had the realization that they couldn’t possibly be the only people to have gone through the experience without understanding the toll caring for someone with Alzheimer’s has on the caregiver’s health.

“This is my new purpose,” Hammond recalled thinking.

Hammond embarked on a mission to help families understand the intensity and the weight on the caregiver looking after a loved one with dementia.

She continued her research, led a support group for family caregivers, and ultimately published a book entitled, “Pathways: A Guidebook for Dementia and Alzheimer’s Family Caregivers.”

Hammond also hosted a radio show called “The Kae Hammond Show–Care for the Family Caregiver” from 2014 to 2016 that she plans on converting to a podcast in January 2019.

Hammond’s work and advocacy has been rewarding, and her personal experience has inspired her to make a difference in other families’ lives.

“It is the most gratifying career of my life,” Hammond said. “It just propels me every day.”

A dementia or Alzheimer’s diagnosis is scary, but it doesn’t have to feel like life is over for either the caregiver or the person with dementia.

“There’s a lot of living [still] to do,” Hammond said. “Create a new story; write a new script for how you want your family to grow through this.”

“We’re going off into a sunset that is a very different sunset to how we planned, but we are going to live as much as we can until the sunset, and we’re going to do it collectively. It’s not easy to do, but the people who have chosen to write that story have much more satisfaction and emotional completion in the end.”