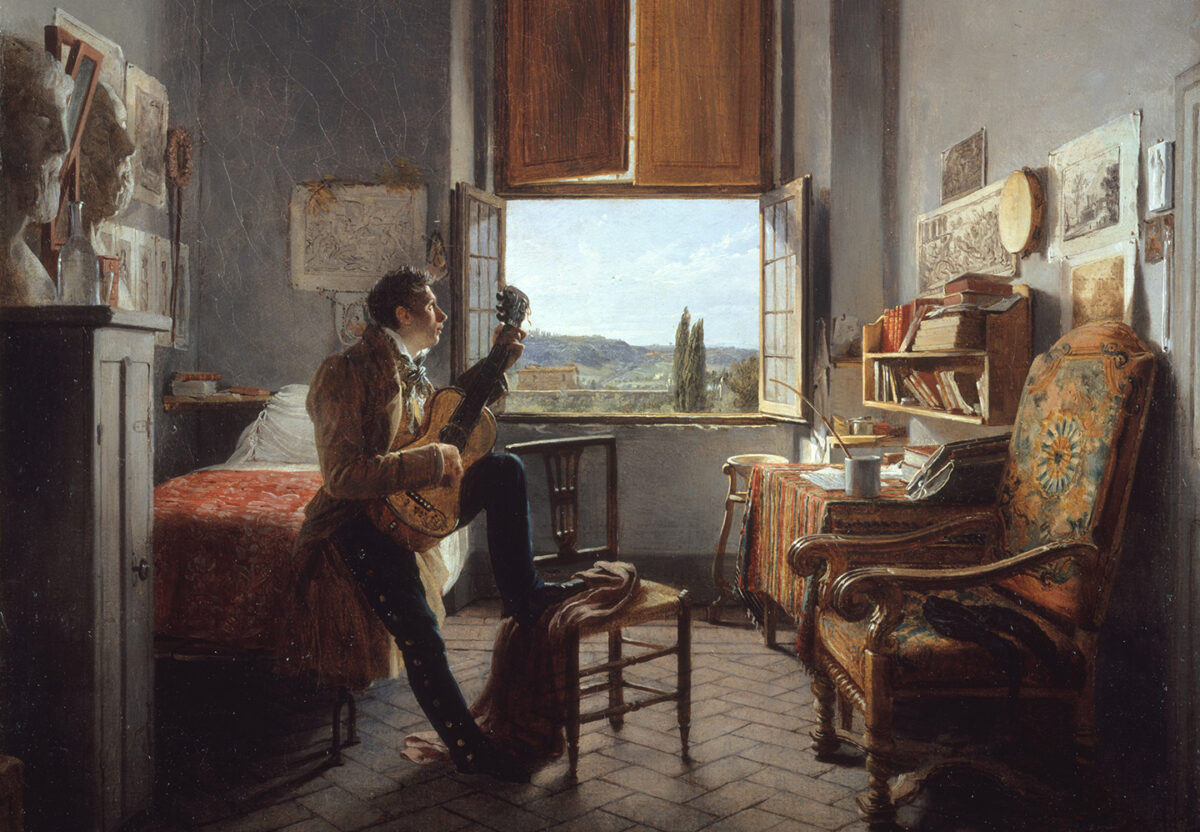 The Villa Medici and the French Art Academy

Under the soaring ceilings of his room and studio at the Villa Medici in Rome, Léon Pallière rested casually. He was a student of fine art who had studied painting at the Parisian Academy before arriving in Rome for his education—as a “pensioner” of the French Academy. By 1817, when the intimate portrait was painted of him was painted by Jean Alaux, the young man was just at the end of his five-year fellowship and about to return to France to commence his artistic career. In the picture, the room opens to a wide vista and is filled with all kinds of everyday objects. He has witnessed the indelible experience of his expatriate life intertwined with art, history, and the airy allure of the Eternal City.

For young artists working in France in the 18th and early 19th centuries, Rome was the ultimate destination, the ideal training ground for them to become immersed in the relics of antiquity and the masterpieces of the Renaissance.

Just as Rome wasn’t built in a day, neither was its reputation as an artistic center. During the Middle Ages, the crumbling ruins of the ancient capital came to represent its cultural stagnation and were thought to have induced a “bad air” that delayed its artistic development. It was not until the 15th and 16th centuries that artists began recognizing the achievements of the ancients and seriously studied their sculptural and architectural relics.

Though imitative in the beginning, these innovators of the Renaissance took from antiquity an artistic essence, which helped them create works that in turn celebrated their own new epoch. During the era following the Renaissance, ancient remains were treasured as classical but so were the contemporary artwork of masters such as Raphael, Michelangelo, Annibale Carracci, and Nicolas Poussin. Rome, which boasted a profusion of both ancient and contemporary classical art, thus began attracting aspiring artists from all over Europe.

Coming from a line of legendary painters, the young Pallière was especially privileged for winning the “Rome Prize”—a prestigious government scholarship that provided for five years of undisturbed study at the French Academy in Rome. Established in 1663 under the reign of Louis XIV, the prize had marked the beginning of some stellar careers—those of François Boucher and Jean-Honoré Fragonard, Jacques-Louis David, and Jean-Auguste-Dominique Ingres, who owed much of their achievement to the early Roman sojourn.

In 1803, Napoleon Bonaparte moved the academy to the beautiful and serene Villa Medici, a Renaissance palace and garden that has housed the institution since. Each year, students in Paris competed fiercely for this singular opportunity, but only one was selected from each discipline. The triumphant painter, sculptor, and architect would then make the two-month journey to the Eternal City, where they would continue their rigorous training and unrelenting progress. After all, youthful success marked only the beginning of an arduous path, where one was judged not only against one’s peers but also against the weighty tradition that had repeatedly brought forth great artistic flowerings.

Indeed, the books, sculptures, and drawings pictured in Pallière’s portrait betray the young man’s hard work. Today, however, few nonspecialists in French painting would have heard his name. Winner of the 1812 Rome Prize, Pallière graduated and then painted an altarpiece for a French church in Rome before passing away shortly afterward. A fellow student, François-Édouard Picot, the winner for the following year, went on to have a successful career painting historical and mythological scenes, but he was best remembered as an educator—the teacher of such academic artists as Gustave Moreau, Alexandre Cabanel, and William Bouguereau. Jean Alaux, a fellow pensioner in Rome and the author of Pallière’s portrait, ended up directing the Villa Medici following the tenure of Jean-Auguste-Dominique Ingres.

Except for the neoclassical Ingres and the symbolist Moreau, the reputations of those successful painters have been mostly eclipsed by the advent of impressionist and modernist art, which sought to break away from the rigorous training and prescriptive rules of the academy. But those so-called limitations—whether the accurate depiction of the human figure or the skillful rendering of perspectival space—were in fact none other than the foundational building blocks in the construction of a visual narrative.

These building blocks enable the composition of bodies and objects in a picture, which is capable of infinite expressions of stories and sentiments. Though demanding years of laborious study, the art academy managed to develop a sophisticated system of pedagogy, which passed down the achievement of the Renaissance from Italy to France and beyond. For artists today, that academic tradition might well serve not as a constraint but as a productive source of inspiration.

Da Yan
Follow
Da Yan is a doctoral student of European art history. Raised in Shanghai, China, he lives and works in the Northeastern United States.
SHARE
Friends Read FreeCopyFacebookTweet
You May Also Like