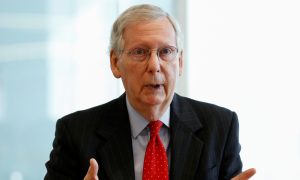 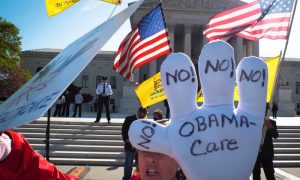 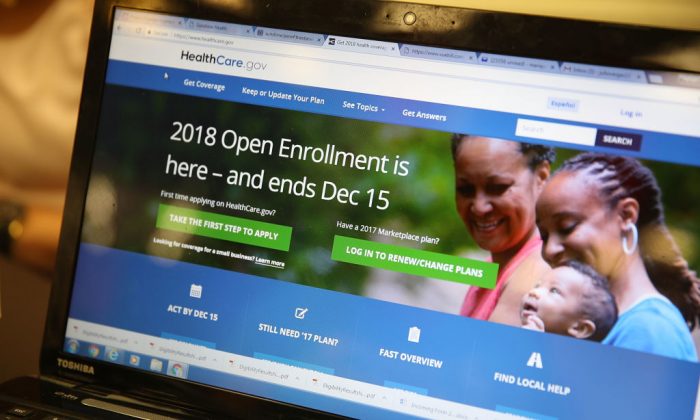 A computer screen shows the enrollment page for the Affordable Care Act on Nov. 1, 2017. (Joe Raedle/Getty Images)
Year in Review 2018

The Unaffordable Care Act’s Death by Many Drops

WASHINGTON—The Roman poet Ovid once wrote that water is soft and marble hard, “and yet we see soft water through hard marble eat.”

The metaphor is now used to describe the virtue of persistence, which the Trump administration has demonstrated as it seeks to degrade what was once dubbed by the House Budget Committee as “The Unaffordable Care Act”: Obamacare, or the Affordable Care Act (ACA).

This year didn’t see sweeping change to the law. In fact, this year was mostly defined by the Republicans’ lack of unity in failing to repeal it last year—twice.

But like water whittling away at hard marble, the Trump administration has given the ACA a good weathering with drop-like rulemakings, law reinterpretations, and exploitation of its loopholes to do exactly what the Obama administration tried hard to prevent—making the act irrelevant.

The day before the midterms, Obama warned Americans that if they didn’t vote for Democrats who would keep the law in place, “the character of our country” was at stake. Ironically, when the ACA first passed, Republicans warned that the law would change the country’s character.

One of the reasons premiums on the health care exchanges more than doubled after Obamacare was implemented is that companies were suddenly required to cover people with pre-existing conditions, and they weren’t allowed to charge them higher rates.

The Centers for Medicare and Medicaid Services (CMS) has tried to buck that trend by exploiting a provision in Obamacare that allows states to suspend some key ACA rules for experimentation purposes.

CMS put out guidelines earlier this month encouraging states to apply for section 1332 innovation waivers and suggested programs the waivers could be used for. All but one of the eight waivers that have been granted so far have been for re-insurance programs, which use public money to offset the costliest beneficiaries so that insurance companies keep premiums low for everyone else.

The states that have implemented these programs have seen decreases in their premium rates in the individual marketplace, according to CMS data, but it’s not clear how much residents in those states are actually saving. States are having to dig into their coffers to fund what was once being paid by beneficiaries through higher premiums.

“There’s nothing cost-saving about these programs, they’re just cost shifting,” said Michael Cannon, director of health policy studies at the Cato Institute, who points out that taxpayers are paying for them through higher taxes.

Some states are offsetting the costs with federal savings resulting from lower expenditures on premium tax credits. The tax credits target people of low or moderate income who buy insurance on the exchanges, and are pegged to the second-lowest cost silver plan. When premiums for those plans decrease, savings for the federal government go up.

Re-insurance at the federal level was implemented for the first three years of the Affordable Care Act in an effort to stabilize the market amid all the changes. The Trump administration has so far not proposed doing it on the federal level again, but strongly encourages it at the state level, saying it promotes competition by reducing uncertainty and risk for insurers who want to enter the market.

“With no competition, these monopoly insurers have the market power to hike rates,” said CMS Administrator Seema Verma at the ALEC Policy Summit in Washington on Nov. 29. “For anyone who understands how competition delivers better value to consumers, it should come as no surprise that a recent study found that Exchange premiums were 50 percent higher, on average, in rating areas with a monopolist insurer.”

While the number of insurers dipped in 2018, more are expected to enter the market or expand their coverage in 2019, which, according to the Kaiser Family Foundation (KFF), is thanks in part to insurance company margins improving this year.

Paul Ginsburg, the Leonard D. Schaeffer chair in health policy studies at the Brookings Institution, says he thinks re-insurance was effective at the federal level and has shown to be effective at the state level as well.

“I think the state often comes out ahead, because if people are covered by insurance, there will be less burden on states from uninsured people who show up in hospitals and get uncompensated care,” he said.

In August, the administration announced that it would be reversing an Obama-era rule by increasing the length of short-term plans from three months to up to three years to create more options for people facing high premiums.

The plans, called short-term, limited duration health plans, are meant to cover people who face a gap in their health coverage and are not subject to ACA requirements.

For this reason, they are cheaper than most ACA plans—54 percent less than ACA-compliant plans, according to a KFF analysis.

Critics argue that making these plans a viable alternative will increase premiums for people buying ACA-compliant health plans because healthy people, who offset the costs of the sick, will buy them instead.

“I would argue that all the healthy people were gone from the exchange plans long before this year,” said Joseph Antos, the Wilson H. Taylor scholar in health care and retirement policy at the American Enterprise Institute. He adds that it’s too early to tell how big of an impact the short-term, limited duration plans will have.

Critics have labeled them “junk insurance” policies because they don’t cover the range of benefits ACA compliant plans do and may offer lower premiums but higher deductibles.

Proponents point out that the ACA one-size-fits-all benefits cover items consumers may not need, such as maternity care for individuals in their sixties, jacking up costs in the process.

Marie Fishpaw, the director of domestic policy studies at The Heritage Foundation’s Institute for Family, Community, and Opportunity, says the short-term plans are not a “silver bullet” solution to high premiums, but could “be a lifeboat” for those who would otherwise go without coverage.

This year is the last year the “shared responsibility payment,” more commonly known as the individual mandate, will be in effect. It imposes a tax penalty on Americans who do not have health coverage and was meant to incentivize the healthy to get insurance to offset the costs of the sick.

Late last year, President Donald Trump signed a bill that made the tax penalty $0 starting in 2019, saying, “you’re basically saying, ‘Pay for something in order not to have to get health care.'”

His administration has further sought to erode the penalty by offering guidance on how to avoid it in 2018. In September, CMS released guidance on claiming a “hardship exemption” from the penalty and announced a new streamlined process to apply for it.

Further showing its disdain, the administration also chose not to defend it in a lawsuit by 20 state attorneys general. That lawsuit resulted in a Texas judge ruling on Dec. 14 that the individual mandate is unconstitutional, and since the mandate cannot be separated from the rest of the ACA, the judge ruled the entire law is invalid.

While this ruling will likely be challenged, it will be closely watched in the year ahead. In the meantime, the decision has “no impact to current coverage or coverage in a 2019 plan,”  Verma wrote after the ruling.

The recent federal court decision is still moving through the courts, and the exchanges are still open for business and we will continue with open enrollment. There is no impact to current coverage or coverage in a 2019 plan.

The administration has also cut the budget for the federal exchange navigators who help people sign up through the federal exchanges and for Medicaid. In 2016, the navigator program had a budget of $63 million. The budget for 2018 was $10 million. This raised fears that fewer people would sign up for health care through the exchanges this year, but preliminary data put out by CMS shows only a 3.5 percent decrease over last year.

Also this year, the administration announced proposed health reimbursement arrangements (HRA) that allow employers to pay into tax-favored accounts that employees can then use to buy individual coverage, as well as pay for other medical expenses. The rule is set to take effect in January 2020.

While all these drops haven’t broken the marble facade that is the Affordable Care Act, the administration has worn it away at the edges. Only time will tell if the water is stronger than the marble.