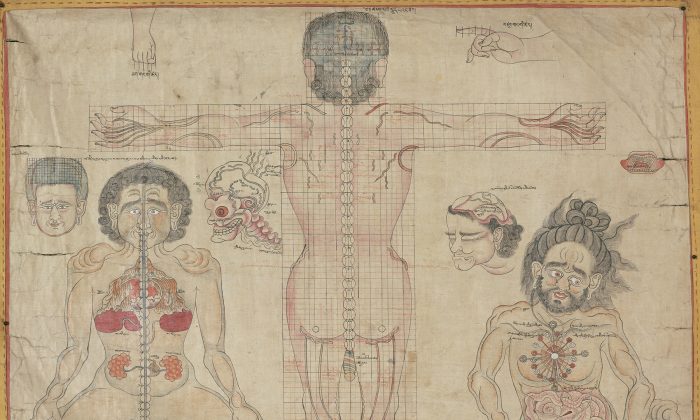 NEW YORK—Nowadays, art can sometimes seem so frivolous, such a function of fashion and commercialism, that to suggest that a society’s art could affect its citizens’ health and well-being would be laughable. This month, the Rubin Museum of Art’s exhibit on Tibetan medicine brings us back to a time when art was instrumental in matters of life and death.

Bodies in Balance is the first exhibit to explore the history, iconography, and culture surrounding the Tibetan outlook on health and healing. Visitors will be exposed to approximately 140 objects including medical texts, teaching drawings, and treatment tools and powered herbs used during the golden age of Tibetan medicine.

A computer-lead pulse-taking station encourages guests to try taking their friends’ pulse, and a group of videos explores how Tibetan medicine principles have been adapted to modern medicine around the world.

This exhibition arrives as Americans rethink how our modern reality—from environmental degradation to processed food to technology addiction—combine to make us perpetually stressed out and unbalanced emotionally, behaviorally, and physically. At the same time, Americans have become keener on natural healing and holistic wellness.

The artwork is striking, but secondary to its content. It must be admitted that because the exhibition is meant for a Western layman audience, it is useful only as an introduction; those seeking deeper analysis may find wall text cursory and should seek out the catalog edited by guest curator Theresia Hofer from the University of Oslo. Given its scope, though, Bodies in Balance cannot be a more complete overview.

This exhibit expands horizons for those of us who had only been exposed to Tibetan art that is religious in subject matter. That’s not to say this exhibit is a secular one—the truth is that the entirety of traditional Tibetan society was organized according to a Buddhist worldview, and in that framework, no area of human endeavor could be seen as confined only to this tangible human space.

The exhibit introduces us first to the Medicine Buddha, who vowed to aid the sick and guide the willing toward enlightenment.

An early silk painting of him dating to the 12th century is on display, the Indian-influence style stands in contrast to the later, more Tibetan and Chinese versions.

He reappears throughout the exhibit in thangkas and illustrative scrolls for his followers (who included many doctors) to meditate upon and cultivate in the footsteps of. One painting in particular describes how a medical student ought to be selected, and how he should progress, the end goal being to cultivate into a buddha.

We see entire volumes of medical texts like the “Four Tantras,” which is the main canon of Tibetan medicine, describing the interplay among the five elements of water, fire, earth, wind, and air in human functioning.

In the most basic model of Tibetan medicine, optimal health can be achieved by balancing the three bodily forces of wind (which controls cognition and movement), bile (digestion and metabolism), and phlegm (muscle movement, fluid production, and circulation).

Most people have too much of one force and too little of another, brought on by their diet, lifestyle, and emotional patterns. The belligerent typically have too much bile, for example; too much spicy food will contribute to excess wind. To a Tibetan doctor, it matters what colors you dream in, what foods you prefer, the quality of your sleep, and whether humidity makes you uncomfortable.

Some drawings and diagrams could have been used to facilitate communication between doctor and patient by illustrating the recommended diets and behaviors. Others helped medical students conceptualize diagnoses and treatments, memorize the names of herbs, or locate acupuncture points.

No Pill for the Human Condition

Lineage in the medical tradition was taken as seriously as that in the monasteries and was pictorially noted in much the same ways. From the “Four Tantras” came supplementary texts, hand scrolls, and catalogues that exhaustively list physicians’ lineages and reference texts.

Tibetan medicine’s profound, well-documented, and systematic body of knowledge was kept in monasteries. After the fifth Dalai Lama established Chagpori Medical College on a hill adjacent to the Potala Palace in 1616, the healing arts flourished with it as its center.

Sadly, Chagpori was destroyed along with many cultural centers during China’s Cultural Revolution. Bits and pieces of knowledge survive through documents like the ones in this exhibit and through continued folk practices that have evolved and merged with technology and modern methods.

For all the tomes written and diagrams drawn, Tibetan physicians and patients operated under the understanding that medical treatment can only provide temporary relief from karma—ultimate wellness cannot exist without enlightenment because the human condition is inherently painful, though not chronic.